Picking up some early St. Patrick Day’s luck in their ACC Tournament opener on Tuesday, the Notre Dame Fighting Irish managed to hold off the Georgia Tech Yellow Jackets, 78-71. The victory advances the Irish to Wednesday night’s game against the seventh-seeded Louisville Cardinals, though they still face an arduous path.

Bringing their depleted roster to Charlotte and entering the tournament on the heels of a seven-game losing streak, not much was expected of Mike Brey’s squad. Their defeat at Pitt on Saturday relegated them to the last seed in the tourney, with a quick exit apparently on the horizon.

Yet Notre Dame had other plans, even though the 10th-seeded Yellow Jackets jumped out to a pair of early five-point advantage, the last at 9-4 with less than four minutes gone in the contest. From that point, the Irish outscored their foes 48-23 for the remainder of the half and held the lead for good when John Mooney’s jumper at the 12:37 mark gave Notre Dame a 17-15 lead.

Building their advantage throughout those first 20 minutes, the Irish held a 35-26 lead with 5:47 left before intermission and then cranked things into high gear. Over that span of time before heading into halftime. Notre Dame went on a 17-6 run and took a commanding 20-point lead at 52-32 into their locker room.

It was late in the first half when the injury-plagued Irish lost yet another player when freshman Nate Laszewski sustained a lower back bruise following a collision under the basket. He didn’t return and his status for the Louisville clash doesn’t look too promising.

The loss of Laszewski removed a player who had contributed 14 points and four rebounds in 18 minutes on the court. His absence forced the Irish to cling to their lead, which the Yellow Jackets managed to chip away over the remainder of the game.

With just under 16 minutes to go, Notre Dame held their largest lead of the game at 57-36, which was when Georgia Tech began their ultimately-futile comeback. The margin was methodically reduced, though the Irish appeared to be in control after Mooney connected on jumper to make it 72-61 with 3:27 left.

What followed were eight unanswered points by the Yellow Jackets, the last two coming on three-pointers to make it 72-69 with 1:12 to play. On the next Irish possession, Mooney once again hit a clutch shot with the shot clock dwindling down, with free throws helping to seal the win away.

The big man once again proved to be invaluable for the Irish, collecting yet another double-double on 20 points and 10 rebounds. He also added three assists, though it was his ability to withstand the pressure of a potential collapse to hit his shot from beyond the arc in the final minute.

The freshman guard pitched in with for the shorthanded Irish by scoring 15 points and collecting five caroms off the glass. He also managed to dish out a pair of assists, with the final two of his four free throws ending the scoring on the afternoon with 17 seconds to play.

Another player who stepped up, Durham came off the miniscule bench to toss in 12 points and collect five boards. However, it was his four blocked shots that aided the Notre Dame cause, most notably when he swatted his last shot with 19 seconds to go. That led to Goodwin’s two free throws that salted the victory away.

Next Up for Notre Dame

The Irish improved to 14-18 on the year, but have no time to ponder their limited options with regard to players. They need to once again enjoy the success they had from long-range against Tech, connecting on eight three-pointers during the game.

On March 3rd, the Irish and Cardinals met, with Louisville coming away with a 75-61 victory. The Cardinals will be entering this game with a 19-12 overall record, though most of that success has come on their home court. Away from there, they’ve won just five of 11 games. 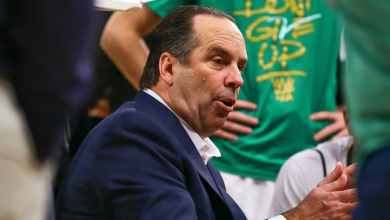 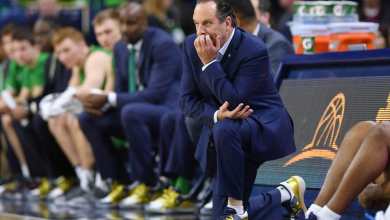 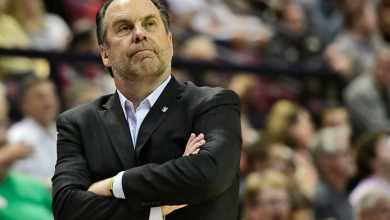 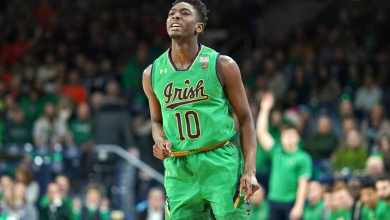