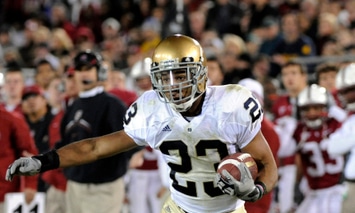 Golden Tate’s remarkable season earned the Irish junior an All-American honor from the American Football Coaches Association (AFCA) this week.  The All-American team is selected by the member coaches.  Tate’s 18 touchdowns this season and highlight-reel catches made him an easy choice for the award.

Tate joins Alabama’s Mark Ingram as one of only two underclassmen on the offensive side of the ball for the AFCA All-American team.  He also became the 56th Irish player to receive the award, second only to Oklahoma’s 60, in the 65 years of the AFCA team.  The Irish will face Oklahoma in a home-and-home series during the 2012-2013 seasons.

This is the first award for Tate after his stellar 2009 season.  He followed the AFCA All-American honor by being named the team’s Co-MVP along with Jimmy Clausen at the team banquet Friday night.  He is also a finalist for the prestigious Biletnikoff Award as the nation’s best receiver, to be presented Thursday, December 10, during the ESPN Award Show.  He will also garner some Heisman Trophy votes, to be presented Saturday, December 12.

Tate’s versatility helped him achieve the All-American honor.  The former running back had 15 touchdown receptions, 2 TDs rushing, and an 87-yard punt return TD in the Pittsburgh game.  He finished the season with 93 receptions and 1,496 receiving yards, both Notre Dame single-season records.

Irish fans hope Golden Tate returns in 2010 for his senior season to eclipse his records.  He has said that whoever is selected as the next coach will impact his decision. 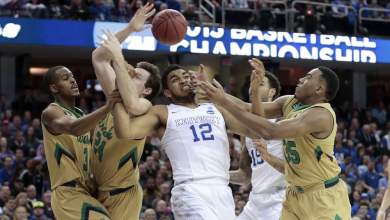 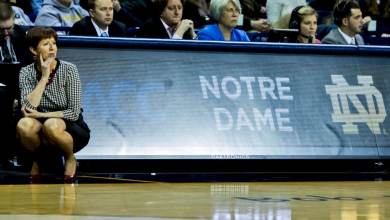 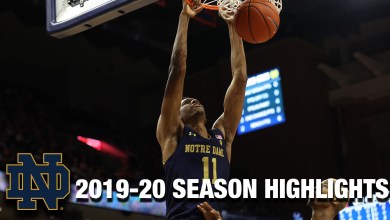