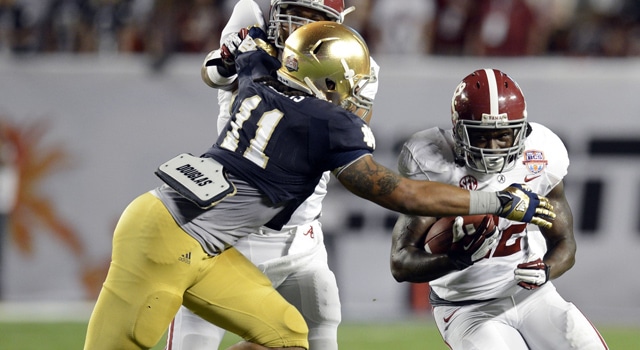 We continue our series of posts on “Now or Never” players for 2013 that we kicked off earlier this month with posts a look at how George Atkinson will be challenged at running back and whether or not Ben Koyack will live up to his potential as Notre Dame’s #2 tight end this year.

Every Notre Dame fanatic – and fanatic encompasses those whose addiction to football demands they follow the unpredictable nature of recruiting – could be heard pounding their office desk with delight when news began to spread throughout Internet circles that Ishaq Williams committed to the University of Notre Dame.  And why not?  Williams provided the perfect symbol for a rejuvenated football program that had been lying dormant for decades.

For starters, Ishaq was a missing piece – a critical component to a defensive unit known for its porous play.  Williams was a Rivals 5-star within the Class of 2011, rated as the second best weakside defensive end in the nation and the 16th overall player regardless of position.  He held offers from every major program in America, and the battle for his signature was intense.

Recruiting aficionados will recall with affection how he came to be a commitment, as it served as a perfect example for Notre Dame turning the corner by besting a host of top programs.  Ishaq and his father, Shaun, residents of Brooklyn, NY, were preparing for an early morning road trip to visit Penn State, which had been one of Willams’ top choices.  The road trip would never take place, as Notre Dame defensive coordinator Bob Diaco showed up at the Williams’ door at 4:30 in the morning, with Ishaq’s father still in his robe.  A little over two hours later Williams had committed to Notre Dame, launching Diaco’s “coffee is for closers” slogan amongst ND recruitniks.

Ishaq was the crown jewel of Notre Dame’s “big three” in 2011.  Stephon Tuitt, a 5-star defensive end from Georgia, was rated as the #22 overall player, six spots behind Williams.  Aaron Lynch, another talented defensive end, was one full star and 12 spots behind.  Tuitt earned second-team Associated Press All-American honors in 2012 and is widely regarded as a future 1st round NFL Draft selection.  Lynch made an immediate impact on the field as a freshman, terrorizing offensive lines until earning Freshman All-American honors.  Naturally, with such production from players below Ishaq’s projected caliber, it wouldn’t be unreasonable to assume Williams had reached even greater heights than his classmates.  However, mere weeks until Williams’ third season donning a golden helmet, he has amassed only 28 career tackles and zero sacks.

How could this be?  It certainly isn’t due to a lack of intangibles.  Measuring in at 6’5” and 255 pounds, Williams possesses rare versatility, which will see him line up at multiple positions in 2013.  Ishaq has the size and strength to put his hand on the ground as a defensive end, while simultaneously maintaining the necessary speed and agility to drop back into coverage – a true prototype of the 3-4 defensive scheme Notre Dame runs.  His hybrid abilities will see him doing both at the Cat linebacker position this fall.  Though only recording 28 tackles in his career, it’s Williams’ unique intangibles that have caused NFL gurus such as Mel Kiper to predict Ishaq to be on the verge of a breakout season.  However, with the measurables Ishaq possesses, a sense of bewilderment exists as to why Williams has still been unable to displace starting ND Cat linebacker, Prince Shembo, with a smaller frame (6’2”, 250 lbs).

Could the answer to the soft spoken linebacker’s production issues be linked to the same obstacles Notre Dame sophomore defensive lineman Jarron Jones has endured as a fellow New York native?  Jones, a former Rivals 4-star from Rochester, cites his slow start at Notre Dame to his high school background.  Standing a large 6’5” and 300 pounds, Jones was always significantly bigger and stronger than his high school peers, leading his high school coach to ask Jones to take it easy on his classmates.  Becoming accustomed to purposefully taking an extra gear off his motor has hurt Jones against college linemen that are capable of matching his size and strength, and he admitted a heavy struggle transitioning to college competition.

Perhaps the problem with Williams is that there isn’t a problem.  Heavy expectations are placed on elite high school recruits, though not all players are ready before they become upperclassmen.  For all the criticism Williams has received, the fact his career is being judged by his freshman and sophomore campaigns, in addition to being slightly unjust, is a bit premature.  Many college football players fail to produce at a high level until their junior and senior years – why should Ishaq Williams be held to a higher standard?

Regardless of where one falls on the Ishaq Williams debate, it cannot be denied high expectations exist for the Brooklyn standout yet again.  Will he break out as Mel Kiper suggests, or will he simply spell Shembo whenever the starting Cat linebacker needs a breather?  I know I won’t be making a prediction.  Last year my crystal ball foretold a rough season for the Irish after the loss of Lo Wood (though never making my season prediction public, I privately predicted a 6-6 record for ND in 2012), and also predicted a breakout season for Ishaq Williams after witnessing him drill a player a mile out of bounds at the Spring Game (thinking his lack of aggression had been fixed).  I was wrong on both counts, so this season I’ll leave the Williams foretelling to Mel Kiper.