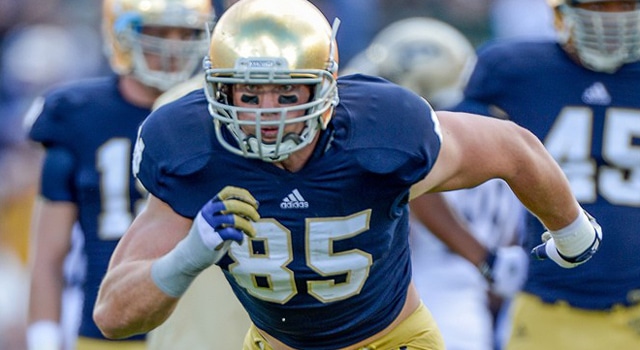 As we inch towards the top 10 in our countdown of the top 25 Notre Dame football players on the 2013 roster, we come to a player who has the tall order of filling the shoes of first round draft pick Tyler Eifert – junior tight end Troy Niklas.

Originally recruited as an outside linebacker who was thought to have the potential to grow into a defensive end of offensive tackle, Troy Niklas has certainly grown since landing on campus.  The California native who selected Notre Dame on Signing Day three years ago has grown, however, into a hulking tight end now tasked with replacing the all time leader in receptions among Notre Dame tight ends.

Niklas spent his freshman season in 2011 as an outside linebacker before moving to the offensive side of the ball last spring.  During the 2012 season, he saw plenty of playing time as Notre Dame’s second tight end with the Irish utilizing multiple tight end sets frequently.  Despite seeing the field often, however, Niklas caught just five passes for 75 yards while scoring one touchdown.

Heading into his junior season, Niklas is considered the next in a line of tight ends at Notre Dame that have seen success at both the collegiate and professional levels.  Will the versatile athlete continue the lineage of standout tight ends to done the blue and gold?

Why Troy Niklas could be ranked higher

Notre Dame’s offense utilizes multiple tight end sets frequently and as Tyler Eifert proved over the last three years, the Irish passing game can funnel through a tight end when it features an elite pass catcher.  With that in mind, it’s easy to see why many have pegged Niklas as a breakout candidate in 2013 despite just five career receptions.

Tommy Rees has lived off of getting the ball to Eifert whenever he’s been in the starting lineup over the last three years and with Rees under center again for the 2013 season, he is likely to look Niklas’ way early and often this year even with a deep and talented wide receiving corps. In fact, with Rees’s reliance on the tight end and a weak opponent to open the season, it’s likely Niklas could eclipse his career reception total before the Irish travel to Ann Arbor in week two.

Niklas has looked great in fall camp so far and is a huge target for Rees at 6’6″, 270 lbs.  With the speed Notre Dame has at wide receiver, Niklas will likely find himself in single coverage in the middle of the field.  If and when that happens, Niklas will make short order of quite a few opposing linebackers.

Why Troy Niklas could be ranked lower

While Niklas will certainly be given many opportunities to make plays, he will still need to make them and up until now, he has only been a factor in the passing game in practice.  In fact, up until now, most of Niklas’s in game contributions have been in the blocking department where his massive size and athleticism have served him well.

Niklas lacks the top end speed that made Eifert a first round pick o the Bengals in April so he will have to rely on his size to shield off defenders at time – something he shouldn’t have a problem doing with his size but he also won’t be able to create as much separation as Eifert was when covered by linebackers. Against many of Notre Dame’s opponents, that won’t be much of a problem, but against more athletic defenses like those of USC and Stanford,  Niklas is going to need to refine his route running in order to be the kind of weapon Eifert was.

What would a successful 2013 season be for Troy Niklas?

Tyler Eifert caught 117 passes over the last two seasons, but saw his total dip to 50 last year after hauling in 67 in 2011.  Part of that drop in production, however, was a result of Everett Golson not relying on the tight end as much as Rees and Notre Dame running the ball more frequently a year ago.  With Golson out this fall and Rees back in the lineup, there will be a lot of passes headed NIklas’s way this season.

Is it possible that Niklas puts up similar numbers to Eifert’s 2012 levels given Rees’s reliance on the tight end?  Of course it is.  Is it likely that Niklas will be able to just step right in and replace the production of Eifert after catching just five career passes heading into this season?  Of course not.

A successful 2013 season for Niklas will likely lie somewhere in the middle of his 2012 production and that of Eifert.  If Niklas can come down with 35-40 catches for 400-450 yards with 3-4 touchdowns his debut starting season should be considered a success.  Niklas has a ton of potential for Notre Dame at the tight end position and will begin to tap into that potential right off the bat this season.

The rest of our countdown so far: