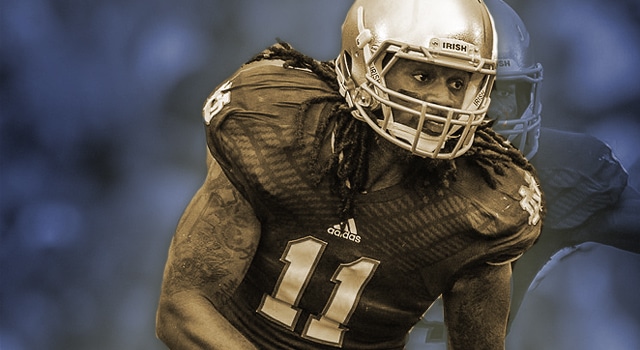 For the last few summers we have profiled a set of players who have come to Notre Dame amid high expections about to enter their junior or senior years either wihtout having lived up to the billing or with a gorup of underclassmen breathing down their necks.

Last year we only looked at three such players – Ishaq Williams, Ben Koyack, and George Atkinson. None of the trio excelled during the 2013 campaign, but Koyack and Williams did show enough a season ago to offer so hope for 2014. Atkinson on theother hand underwhelmed with an opportunity to be Notre Dame’s top running back and left early for the NFL with a light workload likely on the horizon in 2014 had he returend.

This year we are starting our list with a holdover from 2013 – Ishaq Williams.

Ishaq Williams came to Notre Dame with all the hype and then some of a 5-star defensive prospect. The lack of 5-star defensive talent at Notre Dame combined with the now legendary recruiting story of Bob Diaco camping outside the Williams household in Brookyln and essentially preventing a weekend trip to Happy Valley and securing a commitment and early enrollment for Notre Dame only heightened those expectations.

Williams didn’t play great competition in high school but more than held his own in the US Army All-American along with fellow Notre Dame recruits Stephon Tuitt and Aaron Lynch (although Lynch at that time was not yet a Notre Dame commitment) which raised expectations even higher for the New York native.  Since then Lynch and Tuitt have both gone on to the NFL after their junior seasons while Williams is still looking to make his mark on the collegiate level.

With Williams enrolling early at Notre Dame in January 2011, most pundits pegged Williams as a potential impact freshman for Notre Dame the following fall. While Williams did see the field in 2011, it was only in a limited role and it wasn’t until the Michigan game of the 2013 season that Williams collected the first and only sack of his career.  In fact, after three years, he has a total of just 6.0 tackles for loss in his career and has not been credited with a single start despite playing in 35 games.

Just as we’ve heard the last two springs, Williams had a great spring and for the first time in his career, he will be able to focus almost exclusively on rushing the quarterback. During his first three seasons at Notre Dame, all of which came playing in Bob Diaco’s 3-4 defense, Williams was tasked with playing the CAT position which required rushing the quarterback and dropping into coverage at times – something that Williams was never ever able to really get comfortable with.

With Diaco running his own program at UConn now and Brian Van Gorder bringing back a more traditional 4-3 defense for Notre Dame, Williams will be playing with his hand on the ground at defensive end and will be charged with generating a pass rush for Notre Dame. This role should fit much more into Williams’ skillset and allow for him to tap into that 5-star talent.

While the reports out of the spring were very encouraging for Williams, we have heard the same thing in past seasons only to be followed by disappointing seasons. In 2012 it looked like Williams was going to have a big impact after the season opener against Navy but that ended up being the high point of the season for him. Williams started off with strong performances early on in 2013 as well only to be unable to sustain the production throughout the season.

While the move to being a full time defensive end has the potential to greatly help Williams, it also comes with the adjustment of learning a brand new defensive scheme under VanGorder.  So, while the scheme should fit Williams’s skillset better, the normal learning curve that comes with a new scheme could also limit the impact we see from Williams on the field.

Talent has never been a question for Williams – he has an excess of talent and athletic ability.   In Diaco’s scheme though, he just never looked comfortable playing as an outside linebacker.  With VanGorder’s more aggressive defensive system, Williams has the potential to have a breakout season in 2014 similar to how Corey Mays had a breakout season as a 5th year senior in 2005.

Mays came to Notre Dame as a highly rated linebacker out of the Chicago area but after four seasons including a redshirt year, Mays had a total of 6 tackles for loss – just like Williams has heading into his final season of eligibility.  In 2005, Mays played in a new scheme under then new head coach Charlie Weis, and flourished racking up 10.5 tackles for loss and 4 sacks while starting 11 games after starting just one game in the previous three seasons.

Like Mays, Williams came to Notre Dame very highly rated but hasn’t been able to make an impact through his first three seasons.  It is almost shocking to think that Williams has yet to start a single game in his career after coming in as a 5-star, US Army All-American, but that should change very quickly in 2014.  Williams is pretty much etched in stone as one of the starting defensive ends and baring injury, he will be starting the season opener when Rice comes to town.

This off-season Williams packed on an additional 10 lbs to prepare for playing on the line as a senior.  Add that to a better defensive schematic fit and a starting role and all signs point to Williams having a breakout season just like Mays did in 2005.  With just 45 career tackles, 6 for loss, and a single sack; it would not be out of the realm of possibility to see Williams better all of those numbers this season alone if he stays healthy.  The talent has always been there and after three rough seasons, it looks like the stars are finally aligning for Ishaq Williams.

Williams’s Army All-American former teammates will be collecting NFL paychecks in 2014.  If he is able to tap into his potential in 2014, he could very well be joining them in 2015.