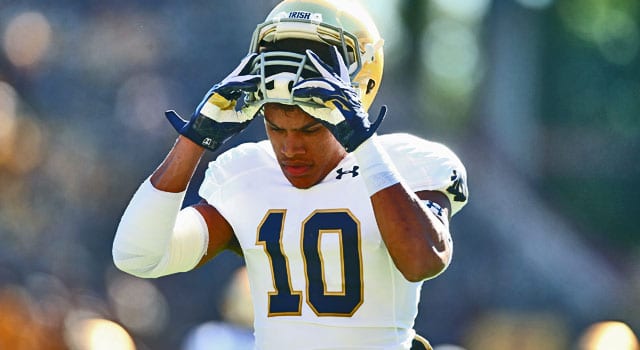 We are about halfway through fall practice for the Notre Dame football team, the media has seen four full practices, the team has gone through it’s annual media day, Jac Collinsworth is delighting us with his new hipster haircut, so naturally it’s time to make some declarations.

If you follow reports from those in the media who are allowed to attend practice and the subsequent interviews from players and coaches, you can certainly notice some common themes emerging regarding who is playing where, whose role is growing or shrinking etc. Unfortunately, that can at times require a lot of work; constantly checking twitter, scouring the message boards, listening to podcasts. Who has the time? Fortunately, I do, and I’ve come to some way too early conclusions.

Break out player on offense

Hunter Jr. has gotten rave reviews from coaches and those attending practice pretty much as soon as the team arrived in Culver to open fall camp. The redshirt junior entered camp as the back up at slot behind Amir Carlisle, but his play has garnered him a ton of first team reps and the thought is he will line up first when the offense takes the field against Texas on September 5th. Catches like this help you understand why. Kelly has called him the “most versatile receiver we have” and can line up at all three receiver spots.

Nelson was declared as the winner of the battle for starting left guard, interestingly by the guy he was competing against, Alex Bars.The former 4-star redshirt freshman came into camp at a massive 6’5 325 pounds and is unsurprisingly seen as a mauler who excels as a run blocker. The fact that he beat out his classmate Bars for this spot is no small feat, Brian Kelly called Bars last year “one of the best I’ve seen in 25 years of coaching.” Simple deductive reasoning reflects that Nelson is the best football player Kelly has ever seen.

The Durham Smythe breakout campaign has taken a big hit in the last week as he has been slowed down with an injury and has missed considerable practice time. However, Kelly called him the best all-around tight end in the spring and he still figures to be the starter come September 5th. Notre Dame loves to utilize the tight end in the passing game and if Smythe can overcome his injury bug he’ll have plenty of opportunities to impress.

Hunter Jr. will bring in the highlight plays that will grab everyone’s attention, but Nelson is slated to start every game and be a mainstay of the offense. Hunter Jr. is hurt somewhat by the depth at the receiver position, and while I expect a good season from him, Nelson will shine brightest for a team that will rely on the run game to make it’s money.

Obviously I root for all of the players, but for this category I’m especially rooting for Okwara to win, simply because his position is vital to the success of this team. Notre Dame has had pass rushing defensive end problems the last couple of seasons and during the off-season they lost defensive ends Jhonny Williams and Kolin Hill to transfers as well as Ishaq Williams to suspension the season before (as of this writing, Williams is still in NCAA purgatory). However, this could be Okwara’s time to shine. The 6’4 270 pound true senior, who has yet to turn 21, will have a major role on Notre Dame’s defense, unlike previous seasons when he was a situational player. He did lead the team in sacks in 2014 with four, but the majority of those came against lesser competition. Will the proverbial senior year light come on? Please let it be so.

Tranquill is listed as a safety, but he could play all over the place for Notre Dame in 2015. He saw snaps as a true freshman last season at free safety, and nickel linebacker, even at times lining up on the edge rushing the passer, and he could have a very similar role this season. Brian Kelly has spoken of needing to find a spot for him on the field, as someone with his skill set is too valuable to have standing on the sideline. Listed at 6’2 225, Tranquill has the ability to play next to Jaylon Smith in passing situations, cover backs and tight ends out of the back field and given Brian VanGorder’s proclivity to bring pressure, he could be very effective attacking opposing quarterbacks. He replaced Max Redfield as the starting free safety against Northwestern last season and tore his ACL on an interception against Louisville that ended his season. He was given a clean bill of health entering fall camp and his swiss army knife like skill set should set him up for a major role on Notre Dame’s defense.

Onwualu is often overlooked as a key member of the linebacking core mostly due to the greatness of Jaylon Smith and the intrigue of the Mike linebacker spot with Joe Schimdt, Jarrett Grace, and Nyles Morgan vying for playing time. Since his move from offense to defense following his freshman season, the now junior has been seen a smallish linebacker who can play a situational role against teams who look to spread Notre Dame out. However, he arrived to camp with an extra 15 pounds to his frame and looks to be able to hold up much better against some of the more power running teams. Even at a smaller size, he’s shown the ability to drop the hammer, so to speak. For now he is penciled in as the starter at Sam linebacker and his athleticism should play big dividends against the two option teams on the schedule as he recorded seven tackles against Navy last season, a career high for him.

I admittedly have a soft spot for this player, he has always shown a strong knack for the game and he strikes me as someone who wins at everything he does. Yeah folks, that’s the kind of hard-hitting analysis you get with me. It also helps that he’ll be playing next to potential first rounder Jaylon Smith and former team MVP Joe Schmidt. With teams looking to run away from Smith wherever he is, that means they will running at Onwualu a lot. I expect him to be up to the challenge.

Normally, this category would have a pick of one or two guys, but after hearing reports from the practice fields, there are about five or six players who figure to get serious playing time. Offensively, receivers Equanimeous St. Brown and CJ Sanders have gotten rave reviews from Brian Kelly and he has stated that both players figure to see the field prominently in 2015, St. Brown on the outside and Sanders in the slot and possibly in the return game. Tight end Alize Jones had been slowed by a neck injury early on, but with the relative inexperience at the position, plus the aforementioned injury to projected starter Durham Smythe, the five star player will have plenty of opportunities to see the field in passing situations.

Defensively, defensive tackle Jerry Tillery may have been thrust into a starting role due to the season ending knee injury to Jarron Jones, but he figured to see a ton of snaps anyway. He is the one player who will be playing out of necessity, and not simply ability. Like Tillery, linebacker Tevon Coney was an early enrollee who was able to participate in the spring, and that experience has him receiving second team reps behind Smith at Will linebacker.  He figures to see time on defense and special teams. Corner Nick Coleman has also drawn Kelly’s attention and he is pushing corners Nick Watkins and Devin Butler  for the third corner position, which could be a starting position with starter KeiVarae Russell moving inside to nickel at times.

However, the freshman who will have the biggest impact on the team in 2015 is kicker Justin Yoon. He is very likely to lead the team in points–the kicker usually does–and he could very possibly be the difference between winning and losing games this year. Fortunately, he has been incredibly consistent so far in practice; Kelly stated he started 18-18 and the only reported miss was a blocked kick. His importance is magnified by the fact that I could not name his back-up without checking, although I assume it’s punter Tyler Newsome. Whatever the case, let’s keep him safe boys.

Tarean Folston will run for 1,200 yards and 12 touchdowns on 6 yards a carry

It may not seem bold to say the starting running back in a running offense will achieve these numbers, but considering Brian Kelly hasn’t had a 1,200 yard rusher in his time at Notre Dame combined with a running quarterback that is likely to take yards and carries away, it would be quite a feat. Last year he ran for 889 yards on 175 carries, good for 5.1 a carry. To reach 1,200 yards, he only needs two more carries a game and six yards a tote. With the threat of Zaire to pull the ball on the read option, defenses will finally have to respect that aspect of the offense and therefore defensive ends cannot simply crash down on the running back every time. Additionally, this offensive line was built to run the ball. They aren’t starting Quenton Nelson because of how well he gets into his pass blocking set. They are going to get after people. Finally, last season Golson threw 18 touchdowns in the red zone. I think Notre Dame will be more apt to run the ball in those situations this season, giving more opportunities to Folston to score touchdowns, He also doesn’t have Cam McDaniel to take goalline touchdowns away from him this season, which also will help him reach the 12 touchdown mark.

When Phil Steele came out with his pre-season All-American list with Redfield as a first team safety, people were aghast. And most of those people were Notre Dame beat writers. After all, he had gotten benched to end last season – not exactly first team AA pedigree. But, you can’t go a day without hearing a positive report of Max Redfield in practice. The knock on him has been his lack of understanding of the defense and his lack of playmaking ability. Evidently those issues have been alleviated with daily reports of his command and vocal presence, as well as interceptions and pass break ups. At 6’1 210 he is the prototypical size for a safety and has displayed the sideline to sideline range that every defensive coordinator looks for, it appears all he needed was a firm grasp of Brian VanGorder’s NFL style defense. Now that it appears he has that, he can let loose all the physical gifts that everyone has been talking about since he arrived in 2013. And given his pre-season publicity, all eyes will be on him to live up to that billing.