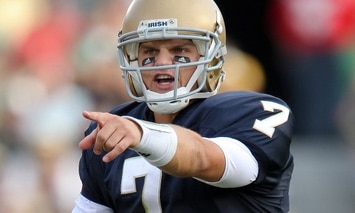 Our countdown continues with perhaps a bit of a surprise.  Not necessarily with the inclusion of the player, but with the ranking itself.  Our #8 player on the countdown probably would have owned every meaningful passing record at Notre Dame if he stayed for four years, but with a three year body of work, Jimmy Clausen checks in in the eight spot on our countdown.

Jimmy Clausen was and still is the most heralded recruit to come to Notre Dame since Ron Powlus, and his introduction to the college football world at the College Football Hall of Fame will forever live in infamy in the college football world.  Once he arrived on campus though, Clausen quickly ascended the quarterback depth chart as a true freshman in 2007.  An injury set him back briefly in fall camp so Clausen didn’t start the season opener against Georgia Tech, but by week two of his freshman season Clausen was starting under center in front of 100,000+ fans in Beaver Stadium against Penn State.  Despite leading a clearly overmatched offense, Clausen was solid in his debut with a steady diet of dinks and dunks.  The Irish offense under Clausen’s guidance was unable to reach the end zone, however, in that first start.

Clausen and the Irish offense would struggle to find any semblance of consistency that season and Notre Dame won just one of Clausen’s first six career starts – the lowly UCLA game in which neither team looked capable of putting much offense together.  By the Boston College game in ’07 the constant barrage of hits took its toll on Clausen and he was replaced by Evan Sharpley for the rest of the game as well as the next two games against USC and Navy.  Clausen was back in the starting lineup when Air Force came to town for the 10th game of the season.  Despite a losing effort, Clausen started to show some signs of life in that game and he would end up leading Notre Dame to back to back wins against Duke and Stanford to close the season.

Heading into his sophomore year, expectations began to rise for Clausen and the Irish offense.  That 2008 season got off to an OK start with back to back wins against San Diego State and Michigan.  The Michigan game in particular gave a glimpse of Clausen’s talents.  Despite not throwing the ball much at all in the second half amid a rain storm, Clausen threw for 147 yards and 2 touchdowns including a couple deep throws to Golden Tate.   A week later though, the Irish offense reverted to its struggling ways and scored just 7 points against Michigan State.  That type of inconsistency would be characteristic of the 2008 season for Clausen and the Irish offense.  At times the offense clicked and put up points only to follow solid performances with clunkers like the Boston College and USC games.

Clausen capped off his up and down sophomore year with the finest bowl game performance any Notre Dame quarterback has ever turned in against Hawaii in the Hawaii Bowl.  Clausen completed 22 of 26 passes for 406 yards and 5 touchdowns in just over 3 quarters of work.  Clausen was nearly perfect on that Christmas Eve night with even his incompletions hitting his targeted receivers.

Expectations were high for Clausen and Notre Dame as a junior in 2009.  Clausen started the season on almost everyone’s Heisman watch list and early on Clausen lit up scoreboards.  In the season opener against Nevada, Clausen tossed four touchdowns as Notre Dame rolled to a 35-0 victory.  A week later Clausen threw another 3 touchdowns to go along with 336 passing yards against Michigan, but the Irish defense jump started the short-lived Tate Forcier Heisman campaign and allowed the Wolverines to score a late touchdown for the win.  In week 3, Clausen suffered a toe injury against Michigan State, but was still able to lead Notre Dame on a 4th quarter comeback to defeat the Spartans.

Perhaps Clausen’s signature moment at Notre Dame came a week after his toe injury against Michigan State when Notre Dame traveled to face Purdue in a prime time matchup.  Clausen started the contest and lead Notre Dame to an early lead, but was clearly limited and had to be replaced by then sophomore Dayne Crist.  Crist played well considering the circumstances, but with Notre Dame trailing late in the 4th quarter Clausen came back in the game and marched Notre Dame down the field leading the Irish to a 4th and goal from the 2 yard line.  Clausen would find Kyle Rudolph for the game winning score with just 25 seconds left.

Unfortunately for Clausen and Notre Dame, there weren’t too many more high points in 2009.  Clausen did lead the Irish to an overtime win over Washington the following week, but when USC came to town two weeks later Notre Dame came up a few yards and a play short in their comeback bid against the Trojans.  Clausen had led a valiant comeback in the 4th quarter against USC, but poor clock management robbed the Irish of a 4th down attempt to tie the game.  Instead, Clausen’s third down pass attempt fell incomplete when Duval Kamara stumbled out of his break.

Clausen continued to rack up the stats the rest of the season, but Notre Dame would win just one more game in 2009 against lowly Washington State.  Notre Dame finished the season on a four game losing streak prompting the firing of Charlie Weis after three straight disappointing seasons.

Why Cluasen is on the countdown

For Clausen this section should probably be named why he is ranked this low since everyone had to figure that Clausen would be on this list at some point.  Most probably felt he would be ranked higher though and in all honesty, he was ranked higher when I originally put together my rankings.  After soliciting some feedback from some friends of UHND and debating it though, this is where Clausen settled in on the list.

First off, Clausen only played three seasons since he left for the NFL after his junior year so his body of work is limited compared to some and when you look at those years, his career just came up a little short of the other players who will show up higher in this list.  Clausen had the misfortune of being the quarterback during the disastrous 2007 season and when one third of your career consists of a 3-9 season in which Notre Dame’s winning streak over Navy was snapped you’re facing a little bit of an uphill battle.  That season was by no means Clausen’s fault.  Far from it.  Just being associated with that season though puts a black mark on your resume – even if you are just a true freshman.

Statistics wise, Clausen certainly filled up a stat sheet while at Notre Dame – especially in 2009.  At the same time, Clausen didn’t do anything to really one up the numbers that Quinn put up over the course of his career or in any particular career.  Quinn still had seasons with more touchdowns, more yards, etc.

The biggest knock on Clausen though, was his record as a starting quarterback.  No matter how much of it was his fault, Clausen compiled a record of just 15-17 (2-6 in 2007, 7-5 in 2008, and 6-6 in 2009) over his three years as the starting quarterback.  In some of those losses Clausen saw his defense fail him after putting the Irish ahead (see ’09 Michigan and Syracuse ’08 for example).  In other losses those Clausen had a chance to put the Irish ahead at the end but came up just short (see ’09 USC and ’08 North Carolina).

All of that said, Clausen still ranks as one of the all-time great quarterbacks in Notre Dame history and pure talent wise, there have not been many better.  Clausen had incredible accuracy over his final two seasons and by his junior year he started to develop into a leader and led his first comebacks wins of his career against Purdue, Boston College, Michigan State, and Washington all while limping around the field at times with his lingering toe injury.

Had Clausen returned for his senior season and played in Brian Kelly’s spread offense, he could have very easily put up some huge numbers and probably would have broken most, if not all of Quinn’s records.  Had he done that, he would be ranked a lot higher on this list.

Clausen decided to leave after his junior year for the NFL following the dismissal of Charlie Weis as the head coach for the Irish.  Draft expert Mel Kiper had Clausen pegged as a first round pick, but much like Brady Quinn, Clausen tumbled down the draft boards and fell much farther than most expected.  Clausen fell all the way out of the first round and lasted until pick #48 when the Carolina Panthers selected him with their second round selection.

Much like Clausen’s freshman year at Notre Dame, he was part of a dreadful team in Carolina in 2010.  Clausen started 10 games as a rookie but struggled to find much success.  He passed for just 1,558 yards and completed a little over 50% of passes while throwing three touchdowns to nine interceptions.  Like the 2007 Notre Dame season, the Panthers struggles were not all on the shoulders of Clausen, but at the end of the season Carolina finished an NFL worst 2-14 last year and ending up picking first in this April’s draft where they took Heisman Trophy winning quarterback Cam Newton.

With Newton in Carolina, Clausen’s career is very much up in the air.  The lost time for OTA’s and workouts because of the lockout could help Clausen hold on to the starting job in Carolina temporarily, but its not likely that Carolina will want to pay the #1 overall pick in the draft to sit on the bench for very long.  Clausen’s best bet at this point in his young career may be to get off to a nice start, show some promise, and hopefully entice a quarterback needy team out there to trade for him.