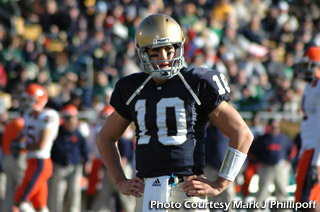 Notre Dame, Ind (UHND.com) — Notre Dame has won a lot of game this year with its high powered offense, but the defense led the way on Saturday in a game in which the Irish offense failed to score a single point in the first quarter for the first time this year.

Syracuse blanked the Irish in the opening quarter and actually lead this game 3-0 before Brady Quinn connected with Maurice Stovall for a 25 yard highlight reel touchdown. Stovall caught his 3rd jump ball touchdown in as many weeks and finished the game with 90 yards while pushing his touchdown total to 10 on the season.

The Irish took a 14-3 lead into the 2nd half after Brady Quinn hooked up with Jeff Samardjiza for a 29 yard touchdown but squandered a couple of scoring opportunities in the first half that could have opened the game up early.

Notre Dame failed to connect on two first half field goal attempts — 1 being blocked while the other was wide left by DJ Fitzpatrick. The Irish offense struggled on 3rd down throughout the game and the 14 first points is the least Notre Dame has scored in the 1st half since the Washington game.

The second half started off much better for the Irish with Leo Ferrine being the recipient of a fortuitous deflection and returning an interception 16 yards for a touchdown on the first drive of the 3rd quarter.

The Notre Dame offense however had trouble putting the ball in the end zone and could only muster two DJ Fitzpatrick field goals before Darius Walker ran into the end zone from 3 yards out in the 4th quarter. Walker finished the game with 123 yards for his second straight 100 yard game and sixth 100 yard outing of the season.

Despite gaining 420 yards and scoring 27 points offensively, the Irish offense left a good number of points on the board on Saturday and could have hung 50+ points if they had better execution.

Brady Quinn finished the game with 2 touchdowns and 270 yards and set a few more Notre Dame records along the way when he became the first 3,000 yard passing season as well as passing Ron Powlus for the career passing yards mark.

The Irish defense however led the way by holding the Orange to only 3 points before putting the reserves in the game in the 4th quarter. The Irish backups gave up a touchdown to the Syracuse starters but the ‘Cuse were held to just 221 yards of offense with just 78 through the air.

Syracuse quarterback Perry Patterson was just 9 of 22 against the Irish secondary and hurt Notre Dame more with his legs on a couple of scrambles when it appeared they had him bottled up. The Irish did manage 3 sacks on Patterson with 2 coming from senior Corey Mays who played in his last game in Notre Dame Stadium Saturday.

The Irish close out their home schedule with a 4-2 record in Notre Dame Stadium including a 4 game winning streak inside the house the Rockne built to end Charlie Weis’ first season. Notre Dame is also one win closer to a BCS Bowl game and could solidify a date with the BCS if they beat Stanford next weekend in Palo Alto.

Not All Doom and Gloom After Fiesta Fallout