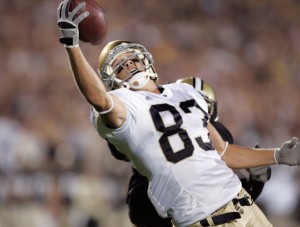 The kickoff time for the 2009 Notre Dame-Purdue game has officially been set for 8:00 PM ET on September 26 and will be televised nationally on ESPN/ABC.

The last time Notre Dame played Purdue in prime time was 2005 when the Brady Quinn led Irish blew out the Boilermakers 49-28 in Charlie Weis’s first season as head coach.  The game featured Jeff Samardzija’s spectacular one handed diving catch (pictured to the right) as well as the now (in)famous Brock Sprack “What Happened?” moment.

The win vaulted Notre Dame into the top 10 for the first since the 2002 season.  Hmmm… when the Irish travel to Ross Ade Stadium this year they will have spent the same amount of time outside of the top 10 as they had prior to that 2005 meeting.

I guess that means the Irish will find themselves in the top 10 after this year’s clash as well, right?  Hey, I can dream can’t I?

Highlights of Notre Dame’s demolition of Purdue in 2005 posted below for your viewing pleasure.