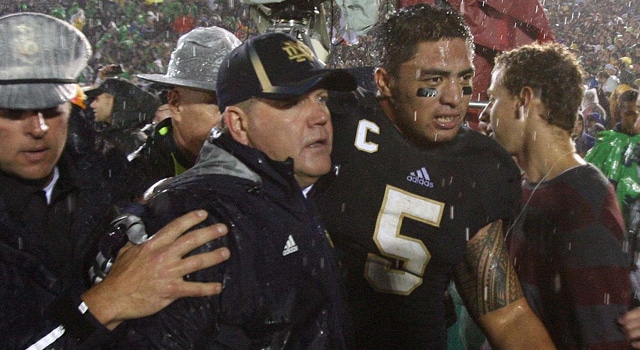 In his third year on the sidelines of Notre Dame Stadium, Kelly has guided the Fighting Irish to its first perfect regular season in 24 years with wins over national powers Michigan, Stanford, USC, and Oklahoma along the way.

After posting back to back eight win seasons during his first two seasons at Notre Dame, Kelly has guided the Irish to the #1 ranking in the country and a berth in the BCS National Championship on Monday night against Alabama after starting the season unranked.  Not much was expected of the Irish this year outside of only the most faithful and devoted Notre Dame fans, but Kelly and his staff have Notre Dame on the doorstep of the program’s 12th national championship and first since 1988.

It is no longer surprising to see the awards flow in for Kelly and the rest of the Notre Dame coaches and players, but it is surprising considering where the Irish were sitting just a year ago.  A year ago today Kelly and his staff were still figuring out what went wrong during a disappointing 8-5 season that ended with a loss to Florida State in the Champs Bowl highlighted by a blown second half lead.

A lot has changed for Kelly and Notre Dame this year though.  There has been a noticeable difference in Kelly on the sidelines in during media sessions.  He is calmer and more confident.  The “purple faced” Brian Kelly that people complained about in years past has been replaced by a head coach who has a more more confident look as he paces the sidelines – an attitude that has been reflected in his player’s attitudes as well.

The change in Kelly has come about after the Irish head coach decided to become more involved with his players both on and off the field after figuring out how to juggle all of the additional responsibilities that have come with being the head coach at Notre Dame compared to Cincinnati during his first two seasons with the Irish.  That change has been talked about by his players throughout the season and is abundantly clear to anyone who has followed Notre Dame closely over the last three seasons.

Despite the award being handed out sine 1967, Kelly is the first Notre Dame head coach to win the award meaning Ara Parseghian, Dan Devine, and Lou Holtz never took home a Walter Camp Coach of the Year honor despite their success on the sideline for Notre Dame.  The Walter Camp Award is voted on by the 124 BCS D1 head coaches and sports information directors.

Along with the Walter Camp Coach of the Year Award, Kelly was previous named coach of the year by Home Depot, the Eddie Robinson Foundation, and the Associated Press.  Kelly has his eyes on another prize right now though – the BCS Championship Trophy that he can bring back to South Bend with him and his team if they are able to take down the defending champion Monday night in Miami.

The Walter Camp Foundation also named Manti Te’o it’s player of the year last month as well as a 1st Team All-American.  They also tabbed Tyler Eifert, Zach Martin, and Stephon Tuitt as 2nd Team All-Americans this season.  Te’o was the 4th Notre Dame player to be named player of the year by the Walter Camp Foundation along with Rocket Ismail, Tim Brown, and Ken MacAfee.