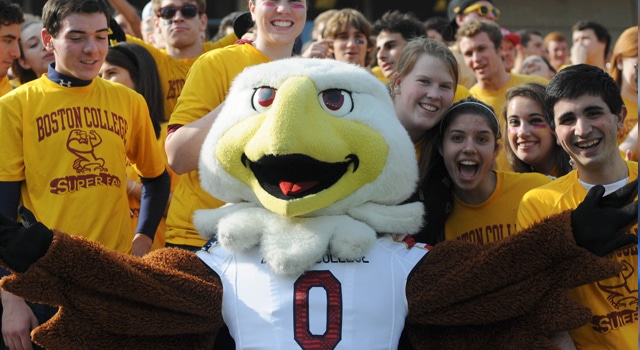 Boston College Eagles mascot Baldwin with fans during the first quarter against the Maryland Terrapins at Alumni Stadium. (Photo: Bob DeChiara / US PRESSWIRE)

Behind Enemy Lines returns this week after a week hiatus.  Apologies for the break in the action with this column, but last week’s weather on the east coast took some time away from us finding a partner to exchange with.  We’re back though and have an inside look at Boston College brought to us this week by the BC Blog BCInterruption.

When you look at the BC offense the first person you have to look at is Chase Rettig. The junior quarterback has come on strong this season after a lackluster first two years on the Heights. Right now the Eagles are third in the ACC in yards per game through the air (284.0). The other major weapon BC has is Rettig’s favorite weapon wide receiver Alex Amidon. The 5’11 junior is fast as all heck and is on pace to shatter all sorts of BC receiving records, but suffers from a case of the dropsies and isn’t very physical. Now onto the bad parts of BC’s offense, mainly the running game. Where to start. Montel Harris transferred, Rolandan Finch hasn’t played since Week 2, Tajh Kimble has been hurt, and Andre Williams suffered an injury last week. That leaves BC with a converted safety David Dudeck, a cornerback James McCaffrey and backup QB Josh Bordner. Combine that with an awful offensive line and it’s no wonder why BC is dead last in rushing in the ACC.

The offense is a completely different beast then years past. Doug Martin, the fourth offensive coordinator in the past three years, has instituted a pass heavy, fast paced offense, in theory at least. Against Miami, the Eagles came out guns blazing, but as the year has progressed the offense has slowed down to the usual snail pace that has defined Frank Spaziani’s regime.

The BC defense has been a giant train wreck this entire season. Gone are the days of Mark Herzlich, Mathias Kiwanuka and Luke Kuechly bailing out bad offenses. No, this year the defense is putrid. They are 111th in the country in total defense allowing 477 yards a game. There are quite a few reasons this is happening. One, the front line applies little to no pressure, they can’t tackle, and get swallowed up on option plays. Seriously, I can’t even tell you a positive about this front seven because they have done almost nothing positive this entire season. Nick Clancy leads the country in tackles, but he only has that number because BC can not get off the field. Look at the Georgia Tech for the best example, the Yellow Jackets controlled the ball for 45 minutes!

The secondary is the other problem. They aren’t very fast or physical and like the defensive line, they too can’t tackle. Sean Sylvia is a nice complimentary player, and Justin Simmons will be a good player soon, but they aren’t going to beat anyone yet. Frank Spaziani continues to employ his lovely 8 yard cushion, so if ND wants to throw short passes all game,  BC won’t stop them. The Eagles certainly haven’t all year.

Can’t really complain about this aspect of the Eagles game this year. Kicker Nate Freese has been solid inside the 40 yard line, and Spiffy Evans has emerged as an excellent kick returner and punt returner. BC actually leads the country in punt return yard average this season. Punter Gerald Levano is a walk on and is very hit or miss, and when he misses he shanks his punts badly.

The Boston College fanbase is a beaten group. We have watched in horror and disappointment as the Eagles have gone from back to back ACC Championship games to a team that can’t even beat Army or Duke. Many BC fans get jacked up for the Notre Dame game, and hope so badly that the Eagles can ruin the Irish’s undefeated season. I have no delusions about this game. BC is going to lose, and lose badly. Frank Spaziani is a horrible coach, and can’t get his team up for anyone, hasn’t beaten a Top 25 team in 4 years, and this Saturday I wouldn’t expect any less.