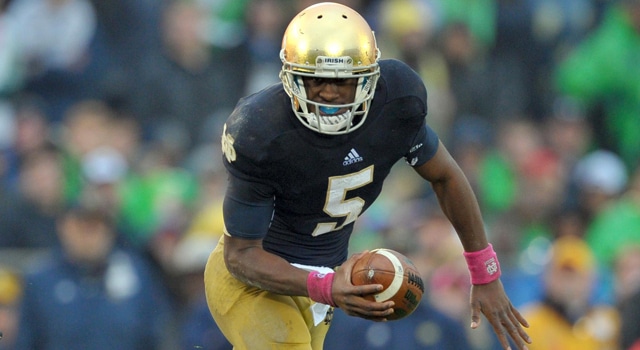 Notre Dame announced on Wednesday that starting quarterback Everett Golson passed all of the cognitive tests he needed to in order to resume practice.  While Brian Kelly didn’t address the media today, it is assumed based on his previous statements that Golson will start this weekend against BYU baring any set backs this week.

Golson suffered a concussion during Notre Dame’s final drive in regulation on Saturday against Stanford and was forced to the sidelines for the rest of regulation and overtime.  In his absence, Tommy Rees came off the bench to cap off the game tying drive by leading the Irish to a field goal before connecting with TJ Jones for the game winning score in overtime.

Had Golson not passed his cognitive tests and been able to resume practice today, it would have been very difficult for him to start this weekend.  By passing the tests though, Golson only missed a day of practice and should have enough time to be prepared for BYU this weekend.

Many on the forum felt the best course of action for Notre Dame would be to rest Golson this weekend so he is 100% for Notre Dame’s trip to Norman next weekend, but given the shaky performance he turned in against Stanford, the sophomore signal caller needs all of the experience he can get right now to speed up the learning curve Brian Kelly talked about during his Sunday press conference.   That is, of course, as long as Golson has passed all precautionary measures and is medically cleared to play.

After taking a big step forward against Miami, Golson fumbled three times – losing all three – against Stanford and struggled to make the proper reads early on in the game.  By the end of the game Golson had settled in and was looking strong on that final drive before getting knocked out of the game.

Should Golson suffer any setbacks, Notre Dame should be able to get passed BYU with Rees leading the Irish offense, but having Golson back there will just further speed up his development and better prepare him and the Notre Dame offene for the showdown with Oklahoma.