Luck of the Irish? Hardly. 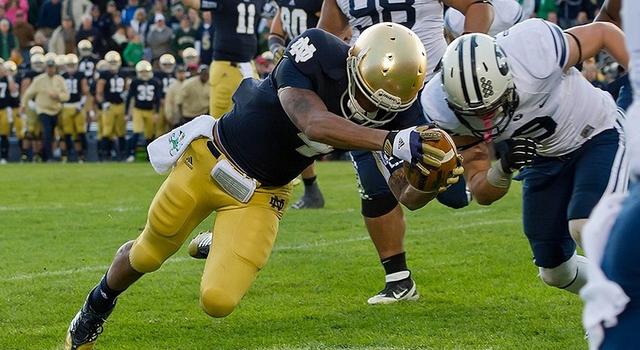 If there was an instrument that measured heart and effort, we are almost positive that the 2012 version of the Notre Dame football team would bury the needle. Week in and week out when Irish fans expect the worst, this team has stood tall and delivered. A last second field goal against Purdue, a great 4th quarter defensive effort against Michigan, an OT goal-line stance against Stanford, and most recently a 4th quarter touchdown against a strong defensive BYU team. Although the Irish squad has shown flashes of brilliance, it definitely has not been the norm so far. This year’s squad is the equivalent of the blue collar worker who packs his lunch every day, and understands the value of a dollar.

While the new generation of college football fan may like seeing Geno Smith putting up 600 yards in the air for West Virginia, Oregon scoring 43 points before half, or Texas Tech and TCU combining for 109 points, there is still a contingency of fans that like hard fought, knock-down drag-out football. Some may still refer to it as three yards and a cloud of dust, but fans of this style just call it football. Fans of the Irish this year have become accustom to this style of smash-mouth football, and appreciate the effort and mental toughness it requires to be successful at it. Notre Dame has proven that under the right circumstances, they can put up points with the best of them – see Miami and Navy. More impressively though, they have proven over and over again that when push comes to shove, they are the ones who are doing the shoving. This isn’t a Saturday type of mentality, this type of football toughness is learned throughout the off-season, months of practice, and in coaching and film sessions.

When Brian Kelly refers to recruiting only “The right kind of guy” this is what he is referring to. A young man who is willing to put it all on the line when the time comes and be successful at it. Over the last two years Irish fans have seen flashes of this mentality, but never when it counted. Now in year three of the Kelly tenure, it is starting to become very apparent that maybe Kelly and staff knew what they were talking about. You can see the influence of Kelly and Co. recruiting efforts paying off in the field. Young men like Louis Nix, Stephon Tuitt, Everett Golson, and George Atkinson paying dividends on the field.   They have brought an attitude that has not been seen in South Bend since the Holtz era ended 1996. If the staff continues to build strong recruiting classes year after year like they have shown so far, it will provide Irish fans something to cheer for consistently and put Notre Dame football back in the middle of national relevancy again. Believe us when we say this is no easy task for a team to do consistently that is not in the SEC these days.

While the body of work is impressive so far, there is still a lot of work left to be done for the Irish. They have very tough road games in Norman and at USC, and it will take great efforts from the Irish on both sides of the ball for four quarters to win those games. Even if the Irish stumble in one or two of their remaining games on the schedule, it will not detract from their accomplishments on the field so far.  Some may call into question the validity of the so-called daunting Irish schedule, other non-believers will easily pass it off as favortism or getting all the breaks. Still others will refer to it as the “Luck of the Irish”, but if you ask Coach Kelly he will tell you luck has nothing to do it with it, and he would be right.