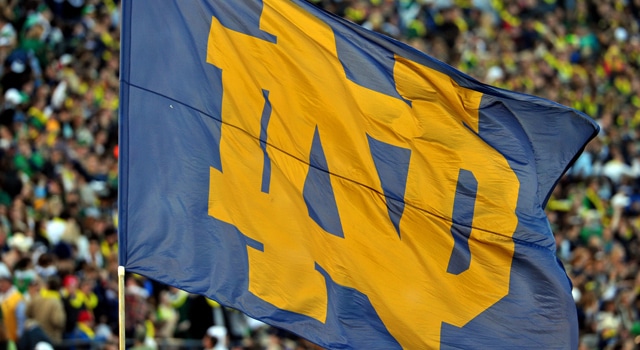 With the holiday season almost upon us, it is a time to reflect and make note of the things we are thankful for. It’s easy during the year to focus on the negative and overlook the truly fun and wonderful things that happen to us all on almost a daily basis. The college football world is no different as it is a very cynical and jaded group with each individual fan-base jumping at the chance to pick apart their favorite team and coaching staff and play Armchair Quarterback.  Fans are guilty of this as well as media, as we all love to second guess play-calling, defensive schemes, substitutions’ etc..etc. So in the spirit of the season we wanted to take time out and mention some of the things we are most thankful for and lucky to have been a part of as we approach the final chapter of Fighting Irish Football – 2012 edition.

Being undefeated after 11 games

This one is pretty obvious or at least it should be to Irish fans. Before the season started this ND schedule was being painted as one of the toughest schedules any team had ever faced and rightfully so. It included games against Michigan, at MSU, Miami, at Oklahoma, Stanford and ends up at the dreaded Los Angeles Coliseum.  While most Irish fans would admit that it didn’t approach the inevitable massacre that some had labeled it as, it was still a very tough schedule and one that any team would have to feel lucky to successfully navigate its way through unscathed. The Irish have done just that, and for that they have been rewarded with the #1 ranking in the nation. They still have a tough task in trying to defeat a very talented USC team on the road, but by doing so will earn a much deserved trip to the BCS National Championship game in Miami on January 7th, 2013.

A coaching staff that gets it

Brian Kelly and staff have done a wonderful job this year on both sides of the ball. Kelly has taken a hands-on approach with his young quarterback and it has shown both on and off the field. While being blasted in the media last year for being overly emotional with his kids, Brian has exhibited great reservation on the sidelines this year, while still finding ways to get his point across. By better understanding Everett Golson’s ability in what he can and can’t do, he has made conscience decisions to put the redshirt freshman is a position to be successful and utilize his strengths. All fans can ask for is to see improvement on a weekly basis, and that is exactly what Kelly and Co. have delivered.

On the other side of the ball, Bob Diaco has helped mold one of the best defensive squads in the nation. From the tremendous talent up front to the maturation of a young defensive secondary, they have never offered up excuses – only results. It’s easy to explain the success of the defense by simply saying they have extremely good talent, but if you talk to the players, they will tell a different story. They will describe a coach who not only believes in the talent and scheme that they put on the field, but also the player himself. He treats everyone the same, and helps each individual understand how they can be better as a player and person.

An exceptional group of young men

It’s not often that group of young men can galvanize a fan-base in such a way that this group has done. Through their effort, hard work, and ability to overcome this team has helped bring faith and respect back to a group of fans who have dealt with ridicule and sarcasm from media and other fan-bases for the last 15 years. They have brought an excitement onto campus and back into the stadium that has not been felt since the Holtz era. This team has overcome some incredible adversity both as a group and as individuals, and the ones who have stayed true to themselves and team are now enjoying the results. When others have doubted them, they remained confident in their ability and that will never be so evident as when they take the field this week against USC.

A destiny the Irish control

It was just last week that Irish fans were losing hope in trying to come up with scenarios in which the Irish could land in the BCS National Championship game. A week later, and that is no longer a problem thanks to the efforts of a Baylor and Stanford squad that took down the remaining  2 obstacles in Notre Dames way. All any team can ask for is that at the end of the year, they control their own destiny and the Irish now have that task checked off the list. As they hit the field Saturday night in Southern California there is only one group that can stop their eventual trek to Miami in January, and that is themselves. As the only remaining undefeated team in the FBS, it is now Notre Dames turn to have the bull’s-eye on their back, and as long as they stay true to themselves, their teammates and coaches, the Irish should walk off the field with a very tough and gritty win – how fitting.

The Irish are a few days away from having the well deserved opportunity to play for the BCS National Championship. We ask that you reflect back on the struggles over the last 15 years and find a way to enjoy not only the game itself, but the journey up to kick-off. So gather your Irish friends, throw your parties, and prepare for one of the most important games in Irish football history – and above all else, simply be thankful.