Wake Up the Echoes: Manti Te’o For Heisman Edition 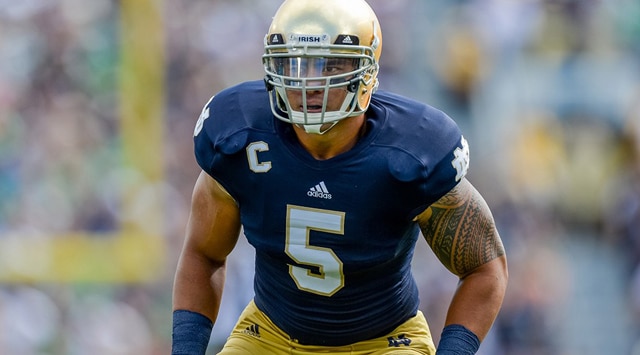 Notre Dame is on the bye this week and without an opponent to get hyped up for, I decided what better way to dedicate the weekly Wake Up the Echoes post than with a little Heisman hype for Notre Dame’s star linebacker Manti Te’o fresh off being placed on the Sports Illustrated cover this week for the first time in his career.

It all started about 3.5 years ago when Te’o surprised the recruiting world by committing to Notre Dame.

A little less than 3 years later, Manti shocked the college football world again by deciding to return to Notre Dame for his senior season.

Brian Kelly talking about his star linebacker this summer.

Some highlights from Te’o’s first couple of season in South Bend.

More highlights of Te’o heading into the 2012 season.

A spotlight on Te’o during his emotional performance against Michigan State game three weeks ago.

Te’o talking about that game and the week leading up to it.

And an inside look at that performance from the University’s official video channel.

Then Te’o followed that up with perhaps his finest performance wearing the Blue and Gold.

Remember when Notre Dame fans used to get all worked up about Todd McShay underrating Jimmy Clausen? Well, that same guy has Te’o in his top 3 Heisman candidated.

And just for good measure… some highlights from Notre Dame’s last Heisman winner.