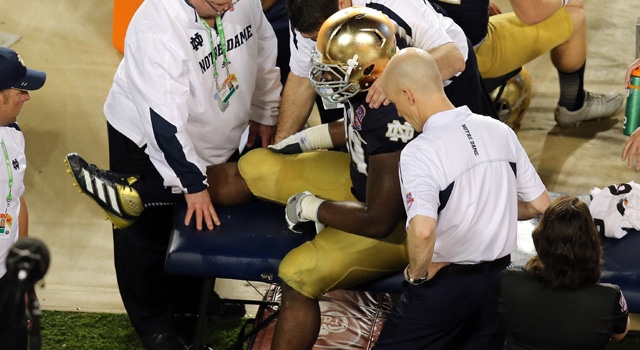 The Notre Dame career of 5th year senior captain Kaprin Lewis-Moore didn’t end the way he hoped for in more ways than one Monday night.  On top of the Irish suffering a 42-14 drubbing at the hands of Alabama, the NFL bound defensive end suffered an ACL injury at the end of the first half.

According to the Chicago Tribune, the “significant” knee injury that Brian Kelly described in his post game comments was indeed an ACL injury that will require surgery for the 4 year starter just months before he was set to begin preparations for a potential NFL career.

Lewis-Moore was not projected to be a high draft pick, but he was a very likely late round pick and at the very worst an undrafted free agent lock heading into next season, but an ACL injury this close to the draft and start of next season will very likely derail his path to the NFL at least momentarily.

Unless your name is Adrian Peterson, you normally don’t just bounce right back from an ACL injury this late in the season and play near the level you are capable of by the start of the following season – especially if you are a rookie looking just to make a roster.

The unfortunate timing of the injury almost certainly takes Lewis-Moore off the draft boards for most, if not all teams.  NFL teams have just 53 roster spotts to fill and can’t afford to take a risk on a player they know will likely not be able to contribute for them in the fall.

This is the second significant injury for Lewis-Moore in the last two seasons.  Last fall he missed the final five games of the season after suffereing a detached MCL.

Lewis-Moore had the best season of his career as a senior in 2012 with 6 sacks – doubling his career total – to go along with 8.5 tackles for loss and 39 stops overall.

It’s hard not to feel anything but sorry for one of the mainstays in the Notre Dame defense over the last 4 years.  KLM has been a tremendous respresentative of Notre Dame on and off the field and had a heck of a Notre Dame career as well after coming to Notre Dame as a lanky tweener before bulking up and locking down a defensive spot for the last 4 years.

All the best the KLM for a speedy and complete recovery in hopes that he can continue to chase down a NFL career just as he chased down opposing quarterbacks for the Irish for the last four seasons.