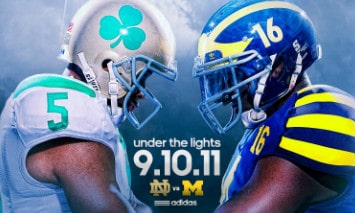 Labeled “Under the Lights” the game between Notre Dame and Michigan will be the first night game ever at Michigan Stadium. It’s still hard to believe “The Big House” has never had a game started after sunset but then again it’s hard to believe Michigan has only won one National Championship in the last 60 years. Sorry Wolverines fans I just had to get that little zinger in there. As you probably know these two storied programs have a history of close battles and emotions seem to run high for both fan bases due to the regional battle for recruits and bragging rights. Notre Dame has lost 4 of the last 5 including the last 2 games vs Michigan that came down to the last possession. In fact Notre Dame led in the last two games with less than :30 on the clock but the defense couldn’t hold. Notre Dame has not suffered a 3 game losing series vs Michigan since 1908.

Michigan Offense:The Michigan offense lives and dies with Denard “Shoelace” Robinson. Last year he thrashed the Notre Dame D with 258 yards rushing and 2 touchdowns while completing 24 of 40 passes for another 244 yards and one TD in the air. Shoelace literally won the game by himself last season. This year Michigan will have to run the ball better with their tailbacks if they want to beat Notre Dame. ND will look to “contain” Shoelace so it’s up to tailbacks Fitzgerald Toussaint, Michael Shaw and Vincent Smith to shoulder some of the responsibility in the ground game. Last week Michigan looked pathetic with the passing game against Western Michigan and will face a much tougher secondary in Notre Dame. Make no mistake though Michigan despite what new head coach Brady Hoke says is going to try to run Shoelace all over Notre Dame. Why wouldn’t he use his best weapon?

Michigan Defense: The Wolverines defense is still a work in progress. New d-coordinator Greg Mattison has a very good defensive line led by All-American candidates Mike Martin and Craig Roh. Their first goal is to pressure QB Tommy Rees and make him rush some throws while also plugging the lanes so Cierre Wood can’t break into the second zone of the defense. Michigan’s linebacking crew is inexperienced and their secondary is young and quite honestly…awful. If Michigan wants to stop a Notre Dame offense that despite the score moved the ball pretty well last week vs South Florida they are going to need somebody in the secondary to step up and make some plays on WR Michael Floyd or he could go for 150-200+ yards on them.

Notre Dame Offense: Tommy Rees is the new starting QB and unless he completely botches Saturday expect him to be the starter the rest of the way. Last week Rees stepped in for an ineffective Dayne Crist and threw for nearly 300 yards and 2 touchdowns in just a half of play. The sophomore is 4-0 as a starter and will be looking to get the ball into WR Floyd’s hands as much as possible. If Notre Dame wants to win they are going to have to get it to their playmakers including RB Wood, TE Tyler Eifert and slot receiver Theo Riddick. Riddick should bounce back against Michigan after a tough South Florida game. The offensive line will be going against one of the tougher d-lines they face all year and if they can protect the QB like they did last week (0 sacks) then Notre Dame should put up at least 30 points on the scoreboard.

Notre Dame Defense: The defense played really well last week and held South Florida to 254 total yards. This week they will be going against a much more dynamic QB in Shoelace. Last year Shoelace torched a thin Notre Dame defense who’s front 7 couldn’t tackle a cold. This year the ND defense should be greatly improved with the emergence of nose tackle Louis Nix. Nix should be a key figure in disturbing the Michigan running game with his size and his ability to disrupt assignments on the offensive line. LB Manti Te’o will be the other key as his assignment along with Darius Fleming is to contain Robinson and make sure he doesn’t have too many big plays of 15+ yards. Notre Dame’s secondary is experienced and despite some bad penalties last week should play much better in Ann Arbor.

What I Expect To Happen: The Notre Dame/Michigan series is always intense but when you add 6 plus hours of tailgating in Ann Arbor expect the crowd to be electric. ND will look to come out and silence the crowd quickly with Wood breaking off some big runs behind an offensive line playing really well. ND will have a couple of mistakes but not nearly as catastrophic as last week and will pretty much control this game despite Robinson having some big plays. Under the cool demeanor of Rees I expect the Fighting Irish to come out focused, calm, and ready to unleash hell on a shaky Wolverines defense. The Irish usually play much better on the road when they are away from the distractions. This week they come together and give Brian Kelly his first win against the hated Wolverines while covering the 4 points they are favored by.