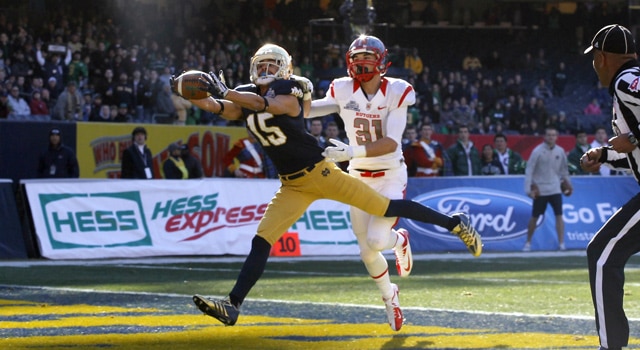 As everyone kicks off their New Year with a day full of college football, outdoor hockey, and resolution creation, we take a look at some New Year’s resolutions for the 2014 Notre Dame Fighting Irish as they work towards spending next year’s New Year’s Day preparing for more football instead of watching at home with their bowl game already in the books.

In 2013 Notre Dame reached the redzone 45 times.  In those 45 attempts, the Irish capped off their drive with a touchdown just 24 times.  Overall Notre Dame managed to score points just 80% of the time they reached the redzone.  That offensive futility ranked Notre Dame 79th in the country in redzone scoring percentage.  Top ranked Florida State led the country in redzone scoring percentage by scoring points an impressive 97% of the time (67 of 69 with 55 touchdowns).

If Notre Dame is going to make a playoff run next year, their redzone woes have to change in a hurry.  Notre Dame can’t score touchdowns just over half of the times they reach the endzone.  In the loss to Stanford, Notre Dame reached the redzone four times and scored touchdowns just twice.  Against Michigan redzone production was even worse with the Irish scoring just two touchdowns in five trips to the redzone and getting points just three times total.  That has to change in 2014.

The one area that has perplexed me the most with Notre Dame under Brian Kelly has been the kick coverage and return units.  This should be an area that can be fixed quickly and can make a huge impact on games.  After four years though, the only return unit that is above average is the kick return team.  Kick coverage, punt coverage, and punt return units, on the other hand all remain below average.  Considering all of the improvements Brian Kelly has delivered to Notre Dame, it’s beyond surprising at this point that special teams are such a liability.

With Notre Dame losing Louis Nix and possibly Stephon Tuitt as well, Notre Dame won’t have the type of defense in 2014 that will allow it to make up for being placed in tough situations consistently like they did in 2012.  Kelly has to find a way to get more production from the punt return game and shore up both coverage units in 2014 to help out both his defense and offense.

3. Get more aggressive on defense

Speaking of Notre Dame not having the kind of defense they did n 2012 next year, the Irish are going to have to be more aggressive on the defensive side of the ball in order to make a playoff run next year.  Bob Diaco’s bend, don’t break style of defense is headed to UConn as he takes over that program while Brian VanGorder and his more aggressive style of defense is rumored to be headed to Notre Dame (although no official announcement has been made).

Notre Dame struggled to generate turnovers in 2013 because it bent, bent, and bent more often than it did in 2012.   With 17 turnovers in 2013, Notre Dame ranked a putrid 100th overall in the NCAA in creating turnovers.   Most of the season Notre Dame struggled to get to opposing quarterbacks as well with just 20 sacks on the season for an average of 1.54 sacks a game which ranked 96th in the country.  For Notre Dame to make a playoff run in 2014, the Irish simply cannot rank near 100th in both sacks and turnovers created like they did this year.  Your challenge, should you accept to it Mr. VanGorder is to generate many more negative plays by the Irish defense in 2014.

4. Find a role for George Atkinson and Amir Carlisle

George Atkinson and Amir Carlisle are both supremely talented athletes but in 2013 they were more athletes than weapons for the Notre Dame offense.  Given the lack of speed and athleticism Notre Dame has had on the offensive side of the ball over the years, Notre Dame needs to find a role for players like this to get them the ball in space and let them utilize their speed.

After three years it is pretty clear that Atkinson is not a feature back, but with his speed Brian Kelly and whoever his new offensive coordinator ends up being needs to find a way to get him the ball in some different ways.  The same can be said for Amir Carlisle.  A move to slot might be an option for Carlisle if he spends the off-season working on catching the football and improving his hands, but based on the limited times we saw Carlisle in 2013, he would need a lot of work there.  Just how Kelly and the Irish can utilize these players better I’m not sure.  Kelly has the off-season to figure that out.

Sticking on the offensive side of the ball, Notre Dame has too many playmakers on offense to score as few points as they did in 2013 next year.  With Everett Golson back at quarterback, a talented stable of running backs, deep receiving corps, and elite receiving tight ends, Notre Dame has all of the components to have it’s first dynamic offense of the Brian Kelly era.  Just having all of the components, however, is not going to make the Irish the offensive juggernaut they have the potential to be.

As of today there is only one game between Notre Dame and Michigan scheduled.  It’s very likely that the two programs will work out some sort of deal in the future to play more games albeit not yearly as they have, but any sort of deal is all hypothetical right now.  With that in mind, it’s imperative that Notre Dame beats Michigan in the final scheduled game with the Wolverines and not just because Notre Dame took back 1st place in all-time winning percentage from Michigan with their bowl win and Michigan’s loss to Kansas State.

There is really no reason Notre Dame should have lost to Michigan this season.  Michigan was not a good football team as their final record of 7-6 fully illustrates.  In their final trip to the Big House though, Notre Dame made Devin Gardner look like a Heisman candidate and allowed Michigan to score 41 points.  Notre Dame can’t let that happen again next year when the Wolverines come to town.  Please, just beat Michigan next year.

There’s no point in rehashing all of the off the field drama Notre Dame experienced in 2013 – it’s been well documented everywhere.  Hopefully the drama ends this off-season.  There are bound to be some transfers and things of that nature – that’s just normal.  I for one will be very happy, however, if I don’t have to hear words like “catfishing”, “poor academic judgement”, and “looking to get out of his letter of intent” this year.

For the first time since arriving at Notre Dame four years ago, Brian Kelly will have a full depth chart at quarterback of QBs he recruited that are perfect fits for the offense he would like to run.  The quarterback situation Kelly inherited was out of his control and in retrospect, he deserves credit for winning as many games as he has with the deck he was dealt.  Kelly, however, has also not helped himself out as much as he could have in terms of turning the quarterback position into one of strength for Notre Dame.

Heading into 2014 the very likely depth chart at quarterback will be 1. Everett Goslon, 2. Malik Zaire, 3. Deshone Kizer.  All three recruited by Kelly, all three perfect fits for the Notre Dame offense, and all three will be on campus for spring and fall practice.  With that depth chart and all of that working in Notre Dame’s favor, if Notre Dame doesn’t have a stable quarterback situation and a solid backup quarterback capable of playing when needed, I don’t know when they ever will under Kelly.