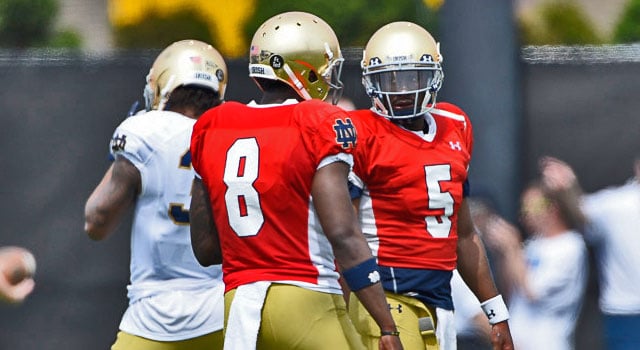 Notre Dame concluded spring practice on Saturday with the annual Blue & Gold game.  While it’s tough to really draw any conclusions from a glorified scrimmage, here are 10 observations from the game and some things to think about as the Irish move into the off-season.

1. There’s a reason there won’t be a decision on the Quarterback until the summer

Neither Everett Golson or Malik Zaire did too much to separate themselves.  Zaire had the long bomb to Will Fuller but that was really the only difference and everyone knows that Golson has the ability to hit Fuller deep from last year.  Golson looked more comfortable running the football than we’ve seen in the past with Doug Flutie complimenting his footwork.  For Zaire, he made more big plays but also was more inconsistent and looked less polished.  Zaire’s playmaking ability though can’t be denied.

2. Notre Dame’s offensive line has a chance to be really, really good

The first and second team offensive lines were both stout on Saturday without there being a large drop-off from one unit to the other.  Quenton Nelson and Alex Bars will still be battling for the starting left guard position through the summer just like Zaire and Golson and the competition will only improve the play of the line.  Kelly has said both could play in the fall but for the offensive line to really be elite, it’s going to need consistency in the starting five.  Whoever wins out though, the Notre Dame offensive line can be great in 2015.

No one ran the ball more than CJ Prosise yesterday and he didn’t disappoint.  He picked up 64 yards on 12 carries and showed the speed we’ve heard about all spring practice.  For a converted wide receiver, he also looked much more comfortable running the ball out of the backfield than you’d have expected.  Kelly said yesterday that he is going to put the best 11 players on the field and its hard to argue against Prosise not being one of those players.  It’ll be interesting to see where Prosise lines up in the fall, but it’s pretty clear he’s a weapon for the new offensive staff to utilize.

After a long lay off from game action, Jarrett Grace was active and looked healthy.  The Notre Dame linebacking corps is going to be fun to watch unfold with the depth and talent Notre Dame has amassed assuming Joe Schmidt comes back 100% for fall camp.  Between Grace, Schmidt, Nyles Morgan, Jaylon Smith, Greer Martini, and Tevon Coney there’s a lot for Brian Vangorder and Mike Elston to work with.

5. Max Redfield’s improvement doesn’t appear to have been overstated

Redfield was all over the field yesterday leading the team in tackles with 6.  Redfield also had the interception on the fan designed “Inebriated Irishman” play that he returned for a touchdown.  Opposing offenses still have the game tapes from last year and will test Redfield early in the season, but on Saturday the praise the coaching staff was sending his way all spring look warranted.

6. The Notre Dame defense could resemble the unit we saw the first half of 2014

Notre Dame clearly has more depth than they did a year ago.  Without Joe Schmidt and Jarron Jones, the Notre Dame defense still made the Irish offense work for everything it got other than the long bomb to Will Fuller.  Last year Notre Dame was lost without Schmidt, but the Irish backers played well in his absence on Saturday.  Now imagine the Irish defense with him back at full strength.  Now add in Keivarae Russell to the mix.  All that sounds like it could equal a defense that is more of a weapon than a liability.  The defense probably won’t rival the 2012 squad, but it doesn’t need to with the potential of the Irish offense.

Maybe Brian Kelly knows he can chuck the ball around the field if he wants to or maybe he looked at what his team did against LSU in the Music City Bowl and realized that if the Irish are to make a playoff run, they are going to have to commit to the run.  Even with limited depth at running back, Notre Dame ran early and often.  Where CJ Prosise ends up playing the most could ultimately depend on what identity the offense assumes.  If Notre Dame’s offense in 2015 resembles what we saw on Saturday, the Irish are going to need as much depth as they can find at running back.

8. The tight ends didn’t do much, will Alize Jones be able to see the field early?

Nic Weishar made a nice catch at the end of the game for a touchdown but other than that, the tight ends were really quiet.  Durham Smythe got a lot of praise from the staff throughout the spring, but he didn’t show up on the stat sheet on Saturday.   Notre Dame needs a weapon at the tight end position for the passing game to truly shine.  Could incoming freshman Alize Jones fill that role?  It was just one scrimmage where the staff was likely holding a lot back, but it would have been nice to see a pass or two down the seam to the tight end.

9. Notre Dame didn’t generate much of a pass rush when the quarterbacks were live

In the first half when the quarterbacks were live there wasn’t much of a pass rush.  Now, Vangorder probably didn’t have license to blitz as he wanted, but that’s kind of the point – Notre Dame couldn’t generate a pass rush without blitzing.  That is not a great sign for the fall.  Jarron Jones was out of action so the line was missing a starter, but none of the defensive ends showed great pass rush skills.  Jhonny Williams got pressure late, but Kelly’s post-game comments about the struggles he’s had to bulk up and play at the new weight didn’t make it sound like he was a candidate to fill that role just yet

10. After a rough start, Tyler Newsome settled in

Newsome’s first couple of punts were rough, but he ended up averaging 42.9 yards per punt with a long of 51 yards.  He also pinned two inside the 20.  Grant all of this was without any chance for a return, but it was nice to see him get some distance and settle in after the first couple of punts looked shaky.