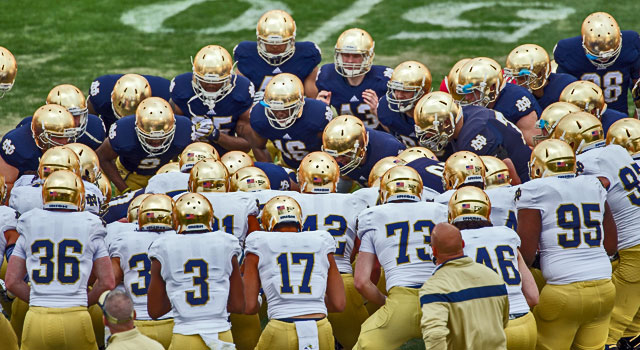 With Notre Dame’s 2015 spring football dashing towards the finish line, Notre Dame fans are about to get their first extended look at the Irish with this weekend’s annual Blue – Gold Game.  Here’s a look at some players to watch for this weekend as the Irish close out spring ball.

Side note and reminder:  the 2015 Notre Dame Blue Gold game is on Saturday, April 18 and will be broadcast live on NBC Sports Network.

Everett Golson & Malik Zaire – This one goes without saying, but the two quarterbacks vying for the starting role in 2015 will take center stage on Saturday.  Right now it’s anyone’s guess who will be the starter when Texas comes to town in September, but throughout spring it’s been reported that Golson is the better passer and Zaire the better runner – just like we knew heading into spring.  Brian Kelly has said that the two will compete for the job through the summer, but both will be looking to stake their claim to the position with the cameras rolling.  Kelly has also recently said that he has not gotten any indication that Golson is even considering a transfer and he wouldn’t have given Golson all of the reps he has in practice if he thought he was.

Jerry Tillery – This year’s star of spring football, the early enrollee and converted offensive lineman has had the most hype of any player at Notre Dame this year.  Brian Kelly has praised Tillery for how well he uses his hands for a true freshman, but some reports from this past Saturday’s open media practice suggested that Tillery might be hitting a bit of a rookie wall.  It will be interesting to see if Tillery shines  as he did early in camp and flashes the potential that generated all of the buzz or if he looks more like an early enrollee.

Jarrett Grace – Many wondered if Grace would ever return to the field and when everyone started taking roster management 101 to figure out how Notre Dame would get to 85 scholarships, Grace’s name popped up as a potential numbers game casualty.  Grace returned to full contact this spring though, adn based on all reports from spring practice, that won’t be the case.  Finally healthy after his gruesome leg injury a year and a half ago, Grace has been praised by Kelly and the defensive coaches for his performance this spring, especially his leadership, with Joe Schmidt out of contact following his broken ankle.  It will be interesting to watch how well Grace moves around on Saturday.

Max Redfield & Elijah Shumate – It’s no secret that the coaching staff soured on Redfield and Shumate last year – both were benched following the meltdown in Tempe.  With a new defensive backs coach guiding them this spring, however, both have elevated their game and look to be turning the corner and turning their elite athleticism into on field production.  Without much depth behind them, the margin for error at safety for Notre Dame is razor thin so the Irish need both to continue their upward trajectory.  Notre Dame’s wide receivers will give the duo a test on Saturday and it will be fun to watch what kind of progress they’ve made under first year defensive backs coach Todd Lyght.

CJ Prosise – Speaking of a position with a lack of depth, numbers forced Notre Dame to test out CJ Prosise at running back this spring. Early reports are that the experiment could end up working out very well for the Irish.  This past weekend Prosise ripped off a 70 yard touchdown run during Notre Dame’s full contact scrimmage where he out-rain the entire defense.  Once Dexter Williams and Josh Adams report in the summer Prosise will likely primarily play wide receiver again, but at this point it’ll be a surprise if Prosise doesn’t see some carries out of the backfield every week.  Watch for Prosise to get plenty of carries this weekend and for the coaches to try and get him involved in the passing game out of the backfield.

Deshone Kizer – The spotlight will be on Golson and Zaire this weekend, but Deshone Kizer could end up playing a very vital role in 2015 as the team’s holder.  After all of the problems with the place kicking operation a year ago, Notre Dame has to find a steady presence at holder – especially with true freshman Justin Yoon handling place kicking duties in 2015.  If Kizer can show steady hands and the ability to get those laces out, Notre Dame fans might feel just a bit more calm about the kicking duties.

Durham Smythe – Ben Koyack will most likely snap Notre Dame’s streak of tight ends being drafted in the 2nd round or higher, but Tight End U is still alive and well at Notre Dame.  Smythe will exit the spring as the clear cut #1 tight end on the Notre Dame depth chart, but with Alize Jones reporting in the summer, Smythe will have a fight one his hands for receptions if he doesn’t keep up the momentum he’s built this spring into fall camp.  Last year Notre Dame saw some big plays from Koyack but didn’t get the consistency that they’ve seen in the past from the likes of Tyler Eifter, Troy Niklas, Kyle Rudolph, et al. It’ll be interesting to see if Mike Sanford and Mike Denbrock make an effort to get Smythe involved in the offense this weekend.

Quenton Nelson & Alex Bars – The talented rising sophomores are still battling for the last open spot in the Notre Dame offensive line.  Will the mauler Nelson or the technician Bars get the nod?  Kelly has said he would like to play both this fall but for the sake of consistency and rhythm along the line he and Harry Hiestand will need to settle in on a starter at some point.  That position won’t be settled on Saturday, but both Nelson and Bars will be using the audition to stake their claim.