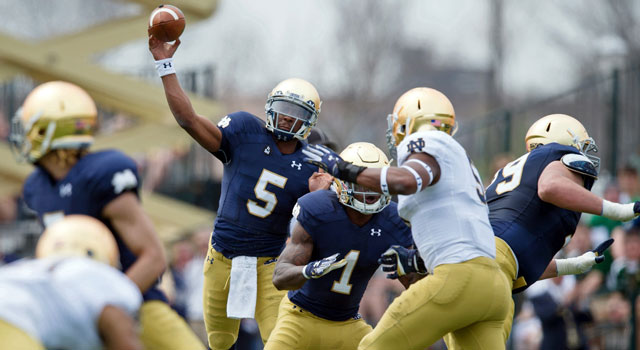 Now that the spring game is in the rear view mirror it is time to focus on moving forward. This is true not only for Irish fans, but coaches and players also. For the first time in many years the Notre Dame football program has some exceptional frontline talent and the depth to match. While this is never a bad problem for any program to have, it does present some interesting scenarios and storylines that will reveal themselves as fall practice inches closer.

The fact is, a large majority of positions for the Irish program are locked in, and barring injury or suspension, fans and coaches know who will be walking onto the field come opening night against Texas. With that said, not everything or everyone is written in stone, and the work that is put in this summer will go a long way in determining who separated themselves from the pack. We take a look six players who, assuming they employ a smart and disciplined training regimen over the summer, can see their stock rise substantially.

Has there been a more polarizing player in recent history at Notre Dame than Everett Golson? The answer to that question is probably a no. In the span of two years Everett Golson has gone from a team leader and a quarterback who helped lead his team to national title game, to a young man mired in controversy and a player who is trying to find his identity not only with himself, but with the Irish coaching staff and the fans alike.

During the 2014 season Irish faithful saw glimpses of the quarterback that Everett Golson used to be, but also saw quarterback who is buried deep in destruction mode whose mind was racing 1000 miles a minute. Indecisiveness and confusion were often words used to describe the former Heisman hopeful, and many fans have already excepted the mindset that Malik Zaire will be the starter without question during the upcoming 2015 season.

So what does that mean for the South Carolina native? Hopefully for him, absolutely nothing. Golson’s recent struggles are well documented, but his ability to overcome adversity is also. This summer probably means more to Golson than any other person on the Irish roster, and the amount of dedication, practice, and self-correction that he will have to employ is almost unquantifiable, but will go a long way in determining what value he has left to offer.

The fact that the 2015 version of the Fighting Irish football program has only one returning catch from the tight end position from last year is not lost on either the coaching staff or its fan base. A football program with a pedigree of turning out excellence at the tight end position now looks to a group of young individuals to fill the void left by the departure of Ben Koyack to the NFL draft.

That void is something the Notre Dame football program has not had to deal with in a while and why this summer is so important to possible incumbent Durham Smythe. It’s safe to say that no one will question the offensive ability of Smythe in regards to size and ability, but as most understand, in order to play tight end at Notre Dame requires more.

Coming out of high school, the Texas native was rated sixth tight end nationally by 247Sports and 15th tight end by Rivals, but that doesn’t erase the fact that Smythe needs to work on his impact blocking, understanding of opponent defenses, and the need to add strength. Those are vitally important components to ones game, but most definitely something that Smythe can work on during the summer.

If you asked any Irish fan two months ago who would be the starting tailback entering the 2015 season the answer would be simple, Tarean Folston. With spring practice all wrapped up, that answer may not be so obvious anymore.

Blessed with natural speed C.J. Prosise has the ability to make an impact at many different positions for the Irish football program, but if the spring game is any indication, he will be given the opportunity to do so in the backfield. Running the ball is not foreign to Prosise, as he did just that 10 times for the Irish, albeit out of the slot position. Now the question that comes into play is can he actually overcome the likes of Folston and Bryant to garner the majority of carries on the field? According to Irish Coach Mike Denbrock that answer would be yes, or at least he has the ability to do so. The effort that that the running back hopeful puts in this summer will go a long way in determining just that.

Couple that fact with the tutelage of former Irish backfield great Autry Denson, now turned coach, and not only is it plausible, it also seems possible. Make no mistake about it though, it will be an uphill climb for the native of Virginia, as it is well documented that Brian Kelly does not like to utilize inexperienced players in the backfield. The effort that that the running back hopeful puts in this summer will go a long way in determining just how time he actually sees, and possibly changing the mindset of Brian Kelly.

With just a total of 9.5 sacks and 20.5 tackles for loss in 2014 season from the defensive end position, it’s one of the few positions at Notre Dame that is still looking for some answers. This is what makes the story of Jhonny Williams so intriguing. Measuring in at 6’4 260lbs, the Berrien Springs native carried very little hype during his recruitment, but former coach and recruiter Chuck Martin saw enough to know the potential that Williams brought with him. Tallying a total of 68 tackles, 12.5 sacks, eight tackles for loss, three forced fumbles, two fumble recoveries, as a senior defensive end at Berrien Springs High School, Williams was redshirted and spent the entire 2014 season on the scout squad.

With the 2015 season almost upon us, it doesn’t leave Williams a lot of time to make his move. The good news (for Williams at least) is that the position isn’t necessarily solidified, the bad news, there are a lot of people fighting to fill that role. If Williams is to have a major impact in 2015, it will most likely be in a rotational type of scenario, as he battles the likes of Grant Blakenship, Micah Dew-Treadway, Isaac Rochell, Andrew Trumbetti, and possibly Ishaq Williams, depending on if Williams is reinstated. The road may be a bit more difficult for Jhonny Williams than some of the others we have mentioned, but that doesn’t mean the odds of him seeing significant playing this year are insurmountable. Obviously much of that will fall upon him though, and the regimen he puts himself through over the course of this summer.

Coming off a year that saw Carlisle start in six games, grab 23 balls for 309 yards, and 3 touchdowns, many are still waiting to see the player they thought they were getting when the running back from USC transferred to Notre Dame.

If you look up the definition of all-purpose you would see a picture of Amir Carlisle, as he seen significant time at wide receiver, ruining back, and special teams. While it’s always nice to have a versatile player as what Carlisle offers, it’s been more of a case not having a real position, as opposed to a jack of all trades scenario. After losing his position in the backfield rotation in 2013, he switched to wide receiver and special teams in 2014, and while productive, we are certain the goals he set forth for himself in his decision to transfer to Notre Dame, have not been realized as of yet.

The good news is that reports have Carlisle as having one of the most productive springs both in terms of development as a player, and as a person. The struggle will be trying to find a way to secure his share of touches amidst a group of wide receivers that most consider one of the best collective groups in the country.

Carlisle has already made the conscious decision to make the best out of his last year in an Irish uniform; but if he is to have a major impact on the upcoming season, a heavy serving of discipline and focus should be on the menu for him during the upcoming summer. There is literally zero room for any type of regression, and an absolute need for a continuation of the effort consistently displayed during this year’s spring practice.

While it may seem odd to have a player named to the 2014 Sporting News Freshman All-America Team on this list, this more about Morgan’s continued need for improvement and understanding of the game, and less of an indictment on his skill-set and weaknesses as a player. The Illinois native was thrown into the fire a bit earlier than expect last season, due to the injury of Joe Schmidt. It was a lot of trial and error, and the Irish coaching staff trying place Morgan in the right positions to utilize his skill-set.

After dealing with injuries and lack of depth, the middle linebacking position will look different, but familiar when fall practice starts in August. With both Joe Schmidt and Jarrett Grace returning to full strength from previous injuries, the Irish are now looking at a position that has a lot of talent, and the depth to match. Most likely Morgan and Grace will stay in the middle, with Schmidt possibly filling in at both middle and weak side.

It would not be surprising at all to see Morgan eventually be named the starter, but a lot of that will depend on his growth over the summer. At no fault of his own, Morgan is still learning how to breakdown opposing offenses, and what his role is on each and every play. His inclusion will not be a necessity in 2015(at least we hope), but rather one that is earned. He possesses the skill-set to be one of the better linebackers in the country, and the effort and focus this summer will go a long way in making that happen.

With just about four months left to go until the Irish take the field inside Notre Dame stadium, there is still time to make a difference for these players.  Make no mistake though, every minute of every hour of every day counts. All six of these players have a chance to strongly influence the 2015 season one way or another, but it’s up to them as to what type of influence that will be.