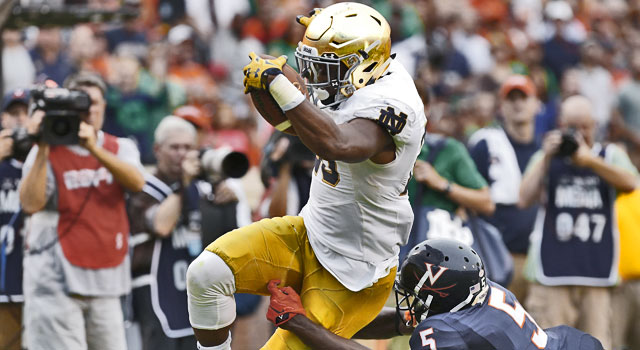 The first domino of the Notre Dame off-season has fallen.  Senior running back CJ Prosise has decided to forgo a 5th year of eligibility and has declared for the 2016 NFL Draft.  The former safety and wide receiver became the first Notre Dame running back since Cierre Wood in 2011 to eclipse the 1,000 yard mark for Notre Dame with 1,032 yards and 11 touchdowns on the season.

Prosise was supposed to be  change of pace hybrid running back for Notre Dame in 2015 but the season ending injury to Tarean Folston and suspension/subsequent transfer of Greg Bryant forced the converted wide receiver into a much larger role.  Prosise responded by starting the season a torrid, record setting pace.  A shoulder injury and concussion against Pitt cost Prosise the Wake Forest game while an ankle injury against Boston College cost him the Stanford game.  Set to return in the Fiesta Bowl, Prosise made a cameo early but wasn’t heard from again after dropping a pass in the first quarter.

Prosise’s injuries paved the way to playing time for Josh Adams who set the Notre Dame freshman rushing record in the Fiesta Bowl with 836 yards.  The frosh added another six touchdowns and figured to be in a dog fight for carries in 2016 with Prosise and the returning Tarean Folston.  While Prosise has not said the crowded backfield helped push him towards the NFL, it seems only logical that it would have.  Folston was the unquestioned top back to start the season and the Irish running game didn’t miss a beat with Adams filling in.

Where Prosise gets drafted is a big question mark though.  His body of work as a running back does not include even one full season of work after injuries cost him pretty much three full games and two other half games.  In the time he was healthy he was an explosive and dynamic runner, but the lack of body of work and multiple injuries will both raise red flags for NFL scouting departments.

The lack of emphasis on running backs in the general in the draft could also land Prosise in the mid to late round or possibly even the undefrated free agent zone.  NFL teams just simply have not invested many high draft picks on running backs in general in recent years and the string of success of undrafted backs like Arian Foster and Thomas Rawls most recently will only further hammer home that mentality.  For Prosise though, all it takes is one NFL team to fall in love with his measureables – which will be off the charts at the combine – to find a home.

Mel Kiper has Prosise as his #3 rated running back right now, but that seems highly optimistic given his body of work.  Kiper has been historically known to overrated Notre Dame players, however including  having Jimmy Clausen ranked among his top 10 picks heading into the 2010 NFL Draft.  Clausen was selected 48th overall.  WalterFootball.com on the other hand ranks Prosise as the #10 running back and projects him as a 3rd-5th round pick.

Rawls is actually a solid comparison to Prosise.  Like Prosise, his body of work as a runner who not extensive over his first three seasons before he transferred from Michigan to Central Michigan where he ran for 1,103 yards and 10 touchdowns in 2014.  Hopefully for Prosise’s sake, his draft position doesn’t align too closely though as Rawls went undrafted.  At a certain point in the draft, however, going undrafted and being able to select your own team among multiple offers is advantageous.  In the case of Rawls, he landed in Seattle where he backed up the aging Marshawn Lynch and ended up filling in for him as he suffered multiple injuries in 2015.  Rawls ended up racking up 830 yards and four touchdowns as a rookie before injuries cost him the rest of his season.

For Notre Dame, with Folston returning from injury and Adams entering only his sophomore season, the top of the Notre Dame running back depth chart remains rock solid for 2016. Having a weapon like Prosise would certainly have helped the Irish, but its  loss that the Irish can withstand.  Sophomore to be Dexter Williams showed promise in 2015 as well with 81 yards on 21 carries and a touchdown and Notre Dame is set to sign 4-star RB Tony Jones and 3-star RB Deon McIntosh next month.

The eyes of Notre Dame fans and the Irish coaching staff will now turn to Will Fuller, Jaylon Smith, and Keivarae Russell as they weigh their NFL options.  It would surprise no one if all three joined Prosise in declaring for the draft, but none have been reported to have made their decisions at this time.