CJ Prosise on Track to Return for Fiesta Bowl 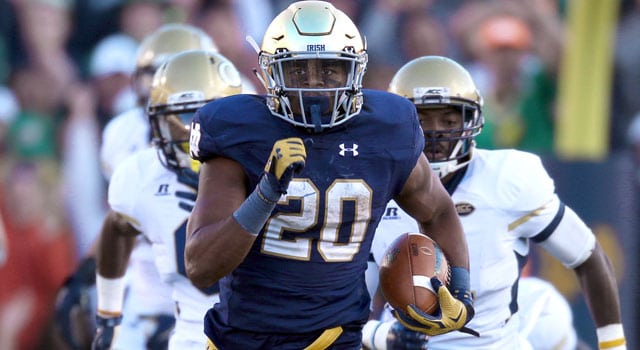 It sounds very promising that Notre Dame will have another player returning from injury in next week’s Fiesta Bowl showdown with Ohio State in the form of 1,000 yard rusher CJ Prosise.  Prosise, Notre Dame’s leading rusher, left the Boston College game with an ankle injury and hasn’t played since.  On Wednesday, though, Brian Kelly said he expects to have Prosise against the Buckeyes.

Kelly told the media on Wednesday that Prosise has returned to non-contact practice but has still been held out of contact drills as Notre Dame wrapped up its final bowl practices on campus yesterday.  He also said, however, that once the Irish arrive in Tempe, that he expected Prosise to be able to resume contact drills.

Brian Kelly isn’t usually very forthcoming with injury information – and rightfully so since he isn’t obligated to be like on the NFL level – so yesterday’s update is probably the closest we’ll get to knowing about Prosise’s status for the Fiesta Bowl without actually seeing #20 suited up with his helmet on.

Should Prosise return, the Notre Dame ground game that hardly missed a beat without him against Stanford, would get the added dimension of Prosise’s homerun ability and his skills as a receiver out of the backfield.  While Josh Adams has been a stalwart as the next man in at running back, he hasn’t developed the receiving aspect of his game just yet – at least not to the level of Prosise who spent the last two seasons playing wide receiver.

Even with Prosise back, it wouldn’t be surprising to see Adams get the starting nodding next week given how has played with Prosise used as more of a change of pace and maybe even in a formation with Adams at the same time.  Given Prosise’s ability as a receiver, Brian Kelly and Mike Sanford surely could cook up some advantageous matchups with Prosise in the passing game with both he and Adams in the backfield at the same time.

It appears as though Notre Dame is getting the healthiest it’s been all season at just the right time.  While the Irish will still be without Malik Zaire, Drue Tranquil, Keivarae Russell (likely), and Taren Folston; Notre Dame will benefit from the return of Jarron Jones, Durham Smythe, Prosise, and James Onwaulu as it looks now.  That’s four projected starters who missed a total of 28 starts in 2015 back on the field for the Fighting Irish.

How all of the returning players are worked into action remains to be seen, but even having all four back in limited roles should benefit the Irish both in terms of their preparation for the bowl game and in the performance in it.