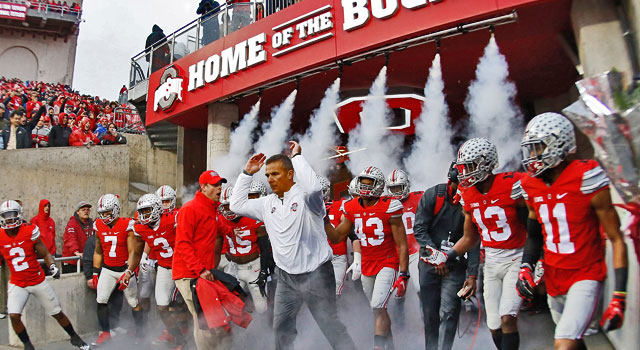 We haven’t done any many scouting report exchanges this year as we have done in past seasons, but with a game as big as the Fiesta Bowl on tap, we had to bring it back.  For this edition of Behind Enemy Lines, we are really excited to have Eric Seger (@EricSeger33) from ElevenWarriors.com, the premier Ohio State website on the internet.  Eric was kind enough to provide a full scouting report of the Buckeyes in advance of the Fiesta Bowl showdown.

We will also have a Notre Dame scouting report published over on ElevenWarriors this week as week.

For the Buckeyes, life became pretty simple against Michigan: Give Ezekiel Elliott the ball. Both the star running back and quarterback J.T. Barrett were lethal against the Wolverines on the ground, helping Ohio State rack up 369 rushing yards in a 42-13 victory. Elliott’s outburst following the Michigan State loss rubbed some the wrong way, but its hard to argue with his production this season on the way to winning the Silver Football as the Big Ten Most Valuable Player.

Ohio State has an extremely veteran offensive line stacked with NFL talent and led by left tackle Taylor Decker. Guards Pat Elflein and Billy Price are no slouches, either, with the former still weighing his options on whether to leave early and enter the NFL Draft. Right tackle Chase Farris is the weakest link of the bunch and struggles in pass protection. Center Jacoby Boren might not be the biggest guy, but he can hold his own. That group, along with Elliott and Barrett, are the catalyst for Urban Meyer’s power-spread offense. If you can halt the running game, you have a good chance at beating Ohio State.

In the air, Barrett hasn’t really looked comfortable all year except for the regular season finale at Michigan. Even in then, however, he only completed 9-of-15 attempts for a meager 113 yards. Like I said, everything starts and stops with the rushing attack.

I’ve felt all season long Ohio State’s inability to get the ball to wide receiver Michael Thomas has hurt it offensive prowess. Thomas is an NFL-caliber receiver with vise grips for hands, and the yo-yoing at quarterback really stunted the development of that portion of the offense.

However, with offensive coordinator Ed Warinner set to call plays in the press box again, good vibes with Ohio State’s offense are present. Will he open things up and try to get the ball into Braxton Miller’s hands for his last hurrah? Time will tell. Barrett has solid receiving options with Thomas, Miller, Jalin Marshall and even tight end Nick Vannett, but if Notre Dame can’t stop the run, expect to see a bunch of No. 16 and No. 15 in white New Year’s Day.

In what was a bit of a surprise, this side of the ball has been Ohio State’s most consistent unit in 2015.

All the talk coming out of camp was about the Heisman Trophy contenders the team possessed on offense with Elliott, Barrett and even Cardale Jones, but quietly Luke Fickell and Chris Ash’s unit continued an upward trajectory of tenacity. Ohio State is second in the country in scoring defense, allowing 14.0 points per game.

For the Buckeyes, it all starts with two-time consensus All-American and two-time Big Ten Defensive Lineman of the Year Joey Bosa. The assumed No. 1 pick in the 2016 NFL Draft this coming spring, Bosa’s stats aren’t as earth shattering as they were a year ago, but he’s arguably been more dominant. Teams go out of their way to send two—and sometimes even three—blockers at him to better their chances at moving the ball. If he gets a one-on-one matchup, there’s an excellent chance he’s going to be in on the play. He’s that skilled, strong and even more so this season, cerebral.

However, up front defensively Ohio State is enduring some hurdles. Star defensive tackle Adolphus Washington is suspended for his final collegiate game after getting hit with a solicitation citation. Urban Meyer said Thursday another senior defensive tackle Tommy Schutt is battling a foot injury but “doesn’t know how serious it is” yet. If Schutt is out, the Buckeyes will call on a slew of younger and less experienced players to step up. However, Fickell, Ash and defensive line coach Larry Johnson could elect to play Bosa inside and insert Sam Hubbard into the starting lineup at defensive end opposite of budding star Tyquan Lewis. They’ve had success with that this season.

At linebacker, the Buckeyes have a Butkus finalist in Raekwon McMillan patrolling the middle. He’s flanked by Darron Lee and Joshua Perry, two tackling machines that have both made big plays this season. In the secondary, safety Vonn Bell is a star and corner Eli Apple had a solid season. Opposite of Apple stands Gareon Conley, who also had a good year in his first as a starter. Tyvis Powell has dropped some interceptions this season at safety, but made a bunch of big plays last year during Ohio State’s Playoff run.

Overall, Ohio State’s defense is excellent, but the holes up front is a huge issue. With the way Notre Dame can run the ball (if C.J. Prosise is healthy), the Irish could find success on the ground.

Punter Cameron Johnston is a weapon for Meyer’s special teams units. He averages 44 yards per boot and does well at putting it where it needs to be so his gunners can down the ball inside the 10-yard line. With how Ohio State’s offense struggled early in the season, Meyer had no reservations punting the ball away and winning the field position game.

Placekicking, however, is an entirely different story. Jack Willoughby, a Duke graduate transfer, won the job out of camp but was inconsistent and lost it to Sean Nuernberger ahead of the Illinois game. Nuernberger, though, promptly shanked a 24-yard attempt against the Fighting Illini. If the Fiesta Bowl comes down to a kicking situation, it wouldn’t be surprising if Meyer elected not to try a field goal and go for a touchdown because of how poor the two have been this year.

Ohio State’s kickoff coverage unit is among one of the best in the country and they’ve gotten their hands on a few punts as well. Overall, the Buckeyes special teams units are solid, save for field goal kicking.

If this wasn’t enough on the Buckeyes for you, make sure to head on over to ElevenWarriors.com for extensive in-depth coverage of Ohio State as we get closer and closer to the New Year’s Day showdown.