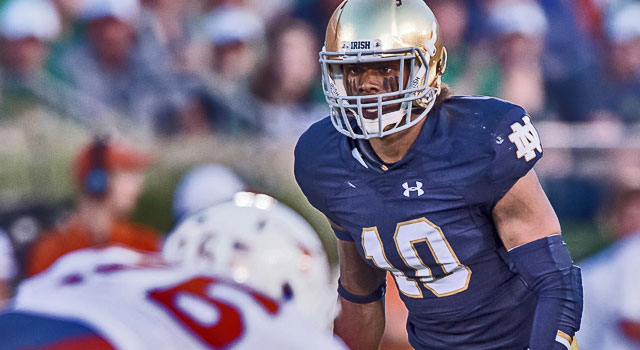 Notre Dame might be getting back a couple of projected 2015 starters in the 2016 Fiesta Bowl, but they will now be without starting safety Max Refield after the junior was sent home for violating team rules.  Brian Kelly informed the media on Tuesday of Redfield’s suspension and stated he will not play as a result.

Brian Kelly did not revel what Redfield’s infraction was, but the big story here is that Notre Dame will now be without another starter for the Fiesta Bowl at the one position where the Irish have the least amount of depth on the entire roster.

With Redfield now unavailable for the Fiesta Bowl, look for Notre Dame to move Matthias Farley into the starting lineup in Redfield’s absence.  Farley filled in for Redfield he missed missed the first half of the Pitt game due to a targeting penalty called against him versus Temple, and is really Notre Dame’s only option other than removing the redshirt from Mykelti Williams or using graduate transfer Avery Sebastian and thus ending any hope he has for a 6th year medical redshirt.

Compounding matters for Notre Dame in the secondary was Kelly’s other revelation on Tuesday – now starting corner Devin Butler will be out for the Fiesta Bowl as well after breaking his foot in practice.  With Butler unavailable, Kelly said Nick Watkins would step into the starting lineup.  Nick Coleman or Torii Hunter Jr will likely fill in as the slot corner now as well.

Just as Notre Dame was getting its healthiest of the season, the Irish have now lost two more starters for the Fiesta Bowl.  Butler was already a fill-in starter with Keivarae Russell out after his injury he suffered against Boston College.

Ohio State won’t be shedding any tears or feeling bad for the Irish’s bad luck after their own string of bad luck that has them without two starting interior defensive lineman – Adolphus Washington (suspension) and Tommy Schutt (injury).

Given Notre Dame’s losses in what was already a shaky secondary, look for Ohio State to attack the Notre Dame defense vertically.  Given the lack of time before the game, it might be tricky for Brian VanGorder to drastically alter his gameplan and approach to slowing down the high powered Buckeye offense, but clearly adjustments will need to be made.  VanGorder loves to blitz but with all of the inexperience in the secondary now, you have to wonder if he will be told by Kelly to dial it down and try to play more bend, don’t break.

For Redfield, this is another stumbling block in what has been a disappointing career following his All-American high school career that earned him a 5-star recruiting rating.  Redfield was benched last year before earning a spot in the starting lineup again this season, but he has still yet to live up the 5-star billing and one now has to wonder what his transgressions in Tempe – whatever they may have been – will mean for his long term future at Notre Dame.