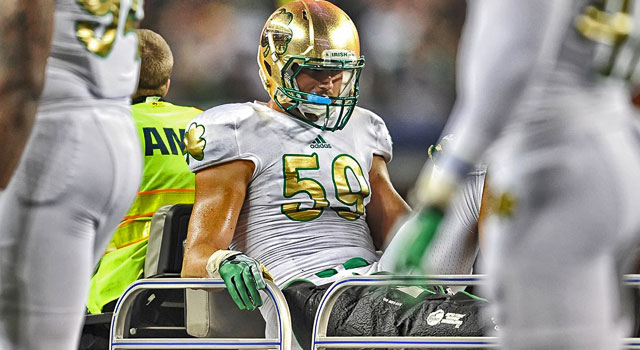 Notre Dame linebacker Jarrett Grace’s long journey back to the playing field is official.  The 5th year linebacker who missed the entire 2014 season following a nasty broken leg suffered midway through the 2013 season, has been cleared to play and will be a full participant in spring football for Notre Dame.

For Grace, his return ends a long, drawn out recovery that suffered setbacks left and right and forced him to re-learn how to run.  In fact, Brian Kelly probably used the term “foot strike” more than any coach in history last year when updating Grace’s injury status on a weekly basis.

While it’s known now that Grace will be back, what’s not known just yet is where he will fit in after being sidelined for the last season and a half.  Joe Schmidt suffered a broken ankle against Navy and will miss spring football, but when healthy it’s hard to imagine the former walk-on turned Monogram Club Most Valuable Player this past not in the starting lineup.  Add in rising sophomore Nyles Morgan fresh off the heels of being named a Freshman All-American, and Notre Dame suddenly has some real depth at inside linebacker.

“We think it’s a good problem to have,” Kelly said.  “We’ll take those kind of problems.  Last year during the season we didn’t have that kind of luxury.”  Nothing Kelly said on Tuesday may have been truer.  Once Schmidt was lost, Notre Dame was dangerously thin at linebacker and had to rely on Morgan and fellow freshman Greer Martini much more than they would have liked to.

With Grace back in the fold, Kelly hinted that Notre Dame might have a platoon at the position this fall.  “Let’s say they share the position.  I’m sure neither one of them wants to hear that.  I’m not suggesting that’s going to happen.  But we’ve got a very good situation where we have both of these guys that can help us lead there.”

It’s even possible according to Kelly that both could be on the field at the same time.  “Joe, he has some flexibility.  Joe can play MIKE and some WILL, too,” Kelly said.   “Not that he’s going to supplant Jaylon at the WILL position.  I’m not suggesting that either.  I’m not trying to give you a bunch of hypotheticals.”

The linebacking corps will be a lot of fun to watch this spring and into the fall.  With Jaylon Smith coming off an All-American season, the potential of Morgan and Martini, and the experience of Schmidt and Grace; Notre Dame finds itself in the best shape they have been in at the position in a long, long time.

Regardless of how the Notre Dame linebackers end up being shuffled by defensive coordinator Brian Vangorder and new linebackers coach Mike Elston, having Jarrett Grace back in the mix is great news for the Notre Dame defense.  Before Grace’s injury against Arizona State, Grace was just starting to come into his own as he started racking up tackles in bunches.

Given how much time off Grace has had it’s probably not fair to expect too much out of him this fall, but considering he is a great candidate for a medical hardship 6th year in 2016, anything Notre Dame can get out of Grace this year will be a huge boost.