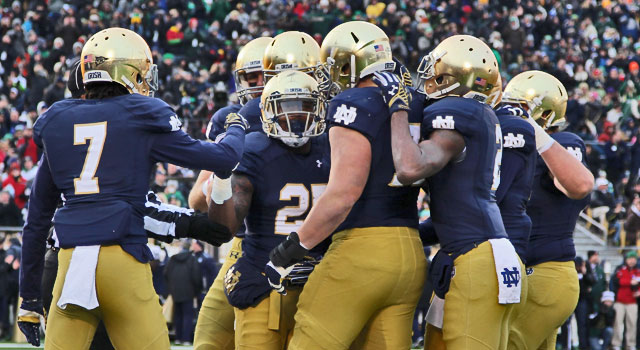 To have 11 players we had to take a flyer at quarterback.  Wiser men would wait and see, but occasionally, the job description of a fool is to rush in.  Despite what is offered below, Everett Golson is evocative of what Churchill said about Russia (“A riddle wrapped inside a mystery shrouded in an enigma.”)  The Nelson, Brown and Carlisle inclusions are subject to change after Spring Practice, for one reason or another.

(1) Ronnie Stanley, Left Tackle. Projected in the 2016 mock drafts as a first rounder, crowding the top 10 in several mock drafts.  Rangy, athletic, nimble, played basketball for Gorman’s Nevada State Champions. Effective in space, on screens and in the second level. A frosh injury slowed down his weight room work and he can still get stronger for his 2015 season.  Stanley and McGlinchey are Notre Dame’s most athletic pair of tackles in recent memory and take a back seat, in 2015, to almost no pair of tackles in America.

(2) Will Fuller, Wide Receiver. Will had a breakout season in 2014.  Went from being an intriguing novelty as a freshman to terrorizing defenses in 2014.  15 touchdowns, 76 receptions for 1,094 yards.  His threat going deep, fulfilling the cliché of “taking the top off the defense,” opens up opportunities underneath, and Fuller advanced in leaps and bounds in his ability to generate  YACS after catching short passes.  He has good vision and can follow his blockers.  He still drops balls and working on that will make him even more destructive in 2015.

(3) Everett Golson,  Quarterback  (PROVISIONAL). This is the Dr. Jekyll Golson of his first 19 starts at Notre Dame.

Will he stay or will he go? Will he win the job outright?  Would he be comfortable sharing the job with Zaire?  These questions are not rhetorical, but legitimate unknowns.  Golson has a huge arm and can make all of the throws.  He occasionally takes risk and throws into perilously narrow windows. His 29-14 TD/Int ratio was underwhelming, but far more destructive were his fumbles in the pocket and while running.  This player, this position is the largest unknown for the 2015 Notre Dame team.  It is the fulcrum, it is the Tipping Point.  And we simply will not know for sure until the clock strikes midnight in Clemson, South Carolina on October 3rd.

(4) Tarean Folston, Running Back.  Took the bit as the lead back in 2014.  Great vision, uses his blockers well, elusive in traffic, gained  889 net  yards rushing, and added to his portfolio with 18 catches for 190 yards.  Tarean’s longest run from scrimmage was 26 yards.  He is not a breakaway threat.  Tarean’s numbers should rise in 2015 both rushing and as a receiver.  He has accepted his role as a blocker/pass protector and improved after the embarrassment in Tempe.  We know not how he will react to the coaching change, but perhaps Autry Denson will teach Folston, and Bryant, a few new tricks.

(5) Mike McGlinchey, Right Tackle.  Some may quibble with this rating but McGlinchey is an idea whose time has come. Mike had wrested the starting position away from veteran Christian Lombard even before Lombard’s injury.  Very athletic, will team with Stanley to provide the Irish with as athletic a pair of tackes as anyone on  the schedule.  6’7.5” 310 lbs, he still seemed lean in his “made his bones” performance against LSU.  He can carry more weight.  Playing next to Elmer for the next two years,  he should enable the Irish to have an ambidextrous running game.  NFL future.

(6) Nick Martin, Center.  His thumb injury hampered his ability to perform at center and he was moved out of position to left guard. He occasionally struggled there.  He should return to his best position, center, in the Spring and is expected to be flanked by Quenton Nelson and Steve Elmer. Should not be held to the standards which brother Zach set, but is quite an improvement over his predecessor, Braxston Cave.  At 6’4.5”, 295 pounds, Martin is the runt of Hiestand’s five man litter. Will be expected to be a second time captain, and, injury free, should be the leader of a powerful offensive line of 2015. If Martin does move to center, and if Golson wins the quarterbacking position, a fifth year player would snap to a fifth year player.

(7) Chris Brown, Wide Receiver . As fast as Fuller, though Chris has not been able to translate his natural speed to the football field as efficiently as Fuller has.  Chris settled in in 2014, with 39 catches for 548 yards.  He may have peaked, though he could take one more step forward as a true senior.  Will have to stave off Spring and Fall challenges from Corey Robinson and Torii Hunter to hold on to his starting position.

(8) Steve Elmer, Right Guard.  After being rushed into action as a frosh (and going up against Larry Donald and Leonard Williams), Elmer had to go through a failed experiment at right tackle.  He then settled in at his natural poisiton at right guard in late September, and is now there to stay.  In 2015 he will be flanked by Nick Martin and Mike McGlinchey and that stability should helpt him.  Particularly strong in his lower body, playing at right guard will accentuate his drive blocking skill and not expose his limiations in pass protection.  Still only a rising junion, Elmer, at 6’5.5” 315 lbs is still growing into his body.

(9) Amir Carlisle, Slot Receiver. Settled in as a  receiver after a choppy turn at running back in 2013. Snagged 23 passes for 305 yards and carried the ball seven times for 47 yards on jet sweeps.  Will have to battle for the starting job in the Spring and Fall against C.J. Prosise and the ubiquitous and versatile Torii Hunter.  Explosiveness may trump experience.

(10) Quenton Nelson, Left Guard.  Rumored to be the clubhouse leader for the left guard spot after his performance as a freshman. Came in at 6’4.5”, 325 lbs, and it will be interesting to see what Longo does with Nelson’s  body.  Like McGlinchey, plays with a certain darkness in his heart.  Early in 2014, Kelly averred that the Irish needed “more push in the middle.“’  Nelson, Martin and Elmer should solve that. It’s a tad more robust than Hegarty, Martin and Lombard.

(11) Durham Smythe, Tight End. Will probably start, though it will be tight end by committee. Identified in recruiting as a downfield passing threat, Smythe drew praise from Kelly for having taken to the physical part of tight end, including stepping up to the plate and volunteering to go against Jaylon Smith in one-on ones.  Is  now 6’4.5” 242 and will be over 250 by Texas. Koyack broke through in his third year, precisely consistent with Smythe’s time in grade.

If, in fact, Durham Smythe is the weakest link, then this will be a pretty strong offensive chain.

This is now a seasoned and mature starting eleven, with Nelson the only underclassman. There is true depth at WR, TE, QB,  and OL. The revamped offensive coaching staff may be elevate the play of some of the players. Go Irish!