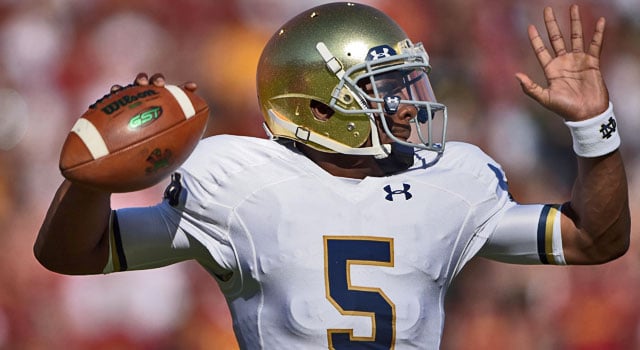 With less than one week until Notre Dame’s annual Blue-Gold game – which serves as the culmination of spring practice – a multitude of storylines have emerged. Early enrollee freshman Jerry Tillery has built significant hype upon transitioning from offensive line to defensive line while senior wide receiver C.J. Prosise has experimented with a Percy Harvin-esque role within Notre Dame’s offense. The struggles of Notre Dame’s special teams have also been on display, raising questions as to whether or not true freshman kicker Justin Yoon can have an immediate impact upon arrival this summer. But those looking for an answer to Notre Dame’s biggest priority, the future starting quarterback, will have to wait until August.

Reports from spring practice sessions supplement UHND’s own spring observations of the quarterback competition indicating that Everett Golson currently has the edge, a fact head coach Brian Kelly alluded to recently when citing the “great” play of Golson in the pocket contrasted against the improvement of Zaire’s accuracy and timing. The battle to be named Notre Dame’s quarterback, however, is far more complicated than a mere one-on-one talent competition, and Brian Kelly will have to take Notre Dame’s long term future into consideration before making any final decision.

Malik Zaire has been the epitome of patience in his two years at Notre Dame, which began by foregoing his final semester of high school to enroll early in order to get a jumpstart on learning Kelly’s offense. Zaire remained quiet when Irish fans began clamoring for him to start in 2013 with Golson out for academic reasons, and turned the other cheek in 2014 when senior kicker Kyle Brindza berated him on national television after a missed 32-yard field goal attempt against Louisville on which he was the holder. He remained mum as Golson accounted for 12 fumbles, 14 interceptions and 27 sacks this past season, and did not once complain when yet another quarterback competition began this spring despite Zaire winning MVP honors against LSU in Notre Dame’s Music City Bowl.

But every person has their limits.

“It’s not the ideal situation,” Zaire recently told the media when asked about splitting quarterback duties with Golson. “At the end of the day, there’s only one Captain Jack Sparrow of the offense.”

Zaire’s message was clear: Notre Dame may decide to use two quarterbacks like it did against LSU, but there can only be one true leader at the position. And though Zaire has said he will accept whatever decision Kelly ultimately makes, it’s only natural to wonder how much longer Zaire is willing to wait.

If Everett Golson is indeed named the outright starter in Notre Dame’s 2015 season opener against Texas, will Zaire be willing to wait another season to get his chance, or will he begin to look elsewhere for playing time? The loss of Zaire to transfer would be a devastating development for the Notre Dame program. With Everett Golson graduating after this season, a Zaire transfer would leave Kelly with only DeShone Kizer and incoming freshman Brandon Wimbush as scholarship quarterbacks in 2016, and neither would have any playing experience. Such a scenario would be an extraordinary setback to a young but talented team ready to make a playoff run.

The other side of the equation isn’t much sunnier. Heading into his final year of eligibility, Golson will surely seek a fifth-year transfer if any indication is given that Malik Zaire will be the starter, leaving Notre Dame with a relatively inexperienced starting quarterback to oversee an offense that is expected to be explosive this fall.

Such scenarios illustrate the delicate balance Brian Kelly will have to take toward the quarterback position, and may very well explain why Notre Dame has expressed interest in using both quarterbacks this season. Should Kelly decide the best way to handle such a tough decision is by simply not making one and allowing Zaire and Golson to share time, will both quarterbacks buy in?

Despite the delicate balance that must be struck, the current problem is a good one to have. By all accounts Kelly has two quarterbacks that could start for different programs, a situation possibly only bested by Ohio State’s three-deep at the position. But if handled incorrectly, Notre Dame’s long term future could be at stake.

How Kelly intends to handle the uneasy rope he’s tight walking remains to be seen, but whatever route he takes with offensive coordinator and quarterbacks coach Mike Sanford will involve factors far beyond a simple head-to-head battle.