Notre Dame lost a New Year’s Day bowl game by 16 points to a talented Ohio State team and lost its final chance for a statement making moment for the 2015 season.  The Irish now head into the off-season with a lot of questions to answer – most notably how to fix the Irish defense – but all was not lost in the Fiesta Bowl and if you are looking to read about how poor the Irish played or how this loss is the end of the world, this column is most likely not for you.

Despite the disappointing outcome and the poor performance of both the Notre Dame defense and special teams specifically, there were some positives to be found in Notre Dame’s latest bowl failure.  That might be tough to imagine right now, but we did see some things yesterday that should give hope for the future.

Here are just a few of them.

The play of Nick Watkins

With Keivarae Russell and his replacement, Devin Butler, both out for the Fiesta Bowl, Watkins was thrust into the starting lineup in a sink or swim scenario.  The sophomore might have had to do a heck of a lot of doggy-paddling to stay afloat early, but once he settled in, he played very, very solid.  Ohio State smartly attacked the first time starter who came in with very little game experience and while he gave up a few passes early, he settled in and ended up making a hell of a play in the endzone in the third quarter with the game still very much in doubt.  With the future of Russell still up in the air, Watkins staked an early claim to the starting position opposite Cole Luke in 2016 and his performance against Ohio State should have Irish fans feeling a lot more at ease with the cornerback position in 2016 even if Russell leaves for the NFL.

The emergence of Andrew Trumbetti

A lot was expected of Trumbetti in 2015, but the sophomore failed to really progress much from what we saw from him as a frosh.  Against Ohio State, however, Trumbetti easily played his best game in a Notre Dame uniform.  He was a disruptive force the entire second half and was one of the few bright spots on the defensive side of the ball for Notre Dame yesterday finishing with 4 tackles, 2 tackles for loss including his first sack of the year and 2 QB hurries.  The Irish desperately need to find a pass rush this off-season if this team wants to make another run at the playoffs in 2016 and Trumbetti showed a bit of a glimpse that he just might be able to fill that role even if he is more of a power rusher than a speed rusher.  Sometimes a big bowl game performance like Trumbetti’s is all a player needs to go into the off-season on a mission.  Hopefully that is the case here.

The return of Jarron Jones

This one could also be labeled as a bit of a depressing moment from yesterday since it made it impossible not to think about “what could have been”.  Jarron Jones return in a very limited role for his first action in over a year (including missing all of spring practice and most of fall camp) and still might have been the most impressive defensive lineman for Notre Dame yesterday with Sheldon Day a bit banged up.  Jones got the type of push on the interior line that Notre Dame lacked in 2015 and that could have easily been the difference of a few points at Clemson or Stanford.  Getting Jones back into action and seeing him play as effectively as he did should also send him into the off-season with the right mindset after so much time lost.  Losing Day this off-season will hurt, but Jones has the ability to be an All-American next fall if he stays healthy.

The reappearance of Corey Robinson

In a year full of explosive offensive plays and gaudy stats for Notre Dame, one of the few disappointments was the regression of Corey Robinson.  His breakout sophomore season had some predicting the junior could have left for the NFL after this season back in August, but his game fell off.  For a brief moment on Friday though, we saw the reappearance of Robinson with three straight catches for 46 yards on a critical drive.  Should Will Fuller leave for the NFL, Notre Dame will be replacing all three of its starting wide receivers in 2016 and having Robinson return to form would be huge.  Notre Dame could have also used the lanky junior in the redzone this season as they struggled to put 7 on the board instead of 3 far too often.  Robinson, along with improved play from the tight ends, could be the key to fixing the redzone woes in 2016.

The impact from Jonathan Bonner

There might not be another player on the team who has drawn as much praise from Brian Kelly despite playing so sparingly as Jonathan Bonner.  Yesterday though we got a brief glimpse about what Kelly has been talking about the last two years.  Bonner was pressed into action with all of the injuries up front and played well.  He got a nice push on the inside and staked his claim as the leader in the clubhouse right now to replace Day heading into the season.  He will have a battle on his hands though from Jerry Tillery who will likely move from the NT position once he is out of Kelly’s doghouse for whatever it is he did to be suspended for the Fiesta Bowl.

The hands of Torii Hunter

If there is one receiver on the roster who could potentially fill the role of Will Fuller in 2016, it’s Hunter and his performance yesterday gave some hope the big things could be in store for him in 2016.  Hunter hauled in four passes for 52 yards including a ridiculous one handed, diving grab in the first half.  Hunter finished the year with 28 catches for 363 yards and two touchdowns and before you scoff at the notion of him replacing Fuller with that stat line, remember, prior to Fuller’s breakout 2014 season, he had just 6 catches for 160 yards coming into last season.

The play calling of… whoever actually is calling plays

Notre Dame’s offense left a lot of points on the field yesterday, but that was more the result of poor execution than poor play calling.  The offensive line did a very poor job against a depleted Ohio State front and Deshone Kizer missed some throws that he is going to be kicking himself for when he watches the film, but the play calling yesterday was pretty damn good.  The pass from Hunter to Alize Jones was dialed up at just the right time and was open but Hunter put just a little too much on his throw.  The staff also did a good job of getting the matchups they wanted and had Kizer connected with Chris Brown on one of a couple of deep throws when Brown got behind the defense, who knows how the game would have played out.  Most importantly though, the play calling in the redzone was spot on.  Notre Dame was 3 for 3 with 3 touchdowns against a damn good defense yesterday.  The coaching mix the Irish have on the offensive side of the ball right now is really working well with the three headed monster of Kelly, Mike Denbrock, and Mike Sanford.  I only wish they could find that type of cohesion and synergy on the defensive side of the ball in 2016.

An Early Look at Injured Notre Dame Players Back in '16 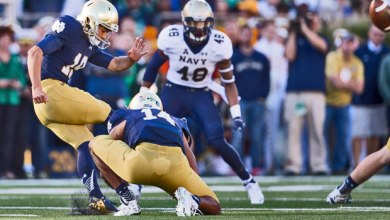