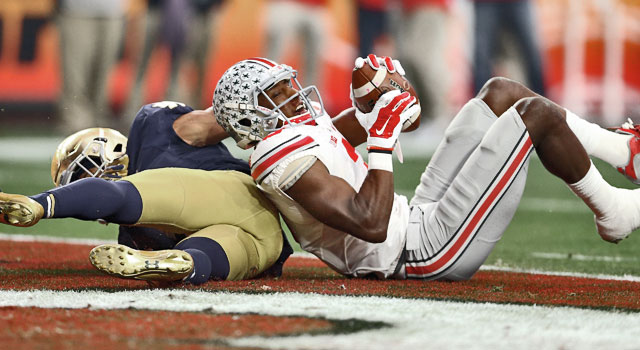 Stop me if you heard this from a Notre Dame fan before, “if you take away that first quarter, Notre Dame wins.”  It’s a common mantra among Notre Dame fans for a reason, it far too many cases it’s absolutely true.  Slow starts have plagued the Irish all season long and throughout the Brian Kelly era.  For Notre Dame to be a legit playoff team in 2016, starting faster – specifically on offense – has to be a point of emphasis for Kelly and his staff.

Before diving in, here are the ugly statistics.  In Notre Dame’s three losses in 2015, the Irish have been outscored by a combined 42-10.  That’s a 32 point differential in three losses that came at a combined 20 points.  In the remaining three quarters, Notre Dame has outscored its opponents 76-64 with it’s best performance coming in the fourth quarter where the outscored the trio of Clemson, Stanford, and Ohio State 33-22 thanks in large part to a 19 point outburst at Clemson.

I don’t know what is more alarming though, the fact that Notre Dame has scored just 10 points combined in the first quarter in its three biggest games of the season or the fact that they have given up 14 points a piece to each of Clemson, Stanford, and Ohio State.  To me that says that whatever offensive game plans the Irish have had going in didn’t work and it wasn’t until the defense allowed the opposition to jump ahead that the Irish had to change course.

In two of their three losses, the Irish kicked off to start the game – Clemson and Stanford.  In those two contests, the Notre Dame defense allowed its opponent to score touchdowns both times with Clemson marching 64 yards on 7 plays and Stanford moving 75 yards on 11 plays.  Both teams were 2 for 2 on third down attempts on those drives on their way to the end zone.  Two tough games on the road and in both games the Irish defense spotted the opposition seven before the offense even saw the field.

In the only loss in which the Irish received the ball, the defense didn’t fare any better when they saw the field for the first time.  Ohio State marched 80 yards on 9 plays for a touchdown converting their lone third down on the drive.

Add that all up and on the first drive of each loss, Notre Dame has allowed the opposition to gain 219 yards on 27 plays, score 21 points, and convert all five of their third down attempts.  Now, while all three squads feature elite offenses, Notre Dame won’t be a playoff team with a defense that allows that type of production.

Offensively, Notre Dame hasn’t fared much better on their first possessions of the game.  Against Clemson the Irish went 3 and out without gaining a yard on offense.  Versus Stanford Notre Dame returned their first kickoff for a touchdown and on their first offensive drive gained 70 yards on 10 plays but settled for a field goal.  In the Fiesta Bowl, the Irish again went three and out gaining just a single yard.

So by comparison, on their first offensive drive in each of the three losses, Notre Dame gained 71 yards on 16 plays and scored 3 points.  That’s a difference of 148 yards and 18 points compared to the opposition.  That just simply won’t cut it if Notre Dame wants to still be playing football at this time of the year in 2017.

The question now though is how do the Irish fix their first quarter problems.  Returning their starting quarterback whether it be Dehone Kizer or Malik Zaire should help some by default, but they can’t count on that alone.  Schematically, the Irish will need to rethink how they script their first drives of the game.  With all of the weapons the Irish have on offense there just isn’t any reason they should struggle that much early on in games.

On defense, it might be beyond just rethinking game plans.  After two years of the Brian Vangorder era, Notre Dame is still starting games slow defensively and opposing offenses are still not having any trouble moving the ball on the Irish.  The type of production from opposing offenses in big games suggests that they know exactly what to expect and are able to do whatever they want.  That ought to be enough to facilitate major changes on defense whether it be simplifying Vangorder’s defense or more drastic changes will be up to Brian Kelly.  One thing is certain though, there is no way Kelly and staff can look at how their defense has played in the first quarter of big games and keep things status quo.