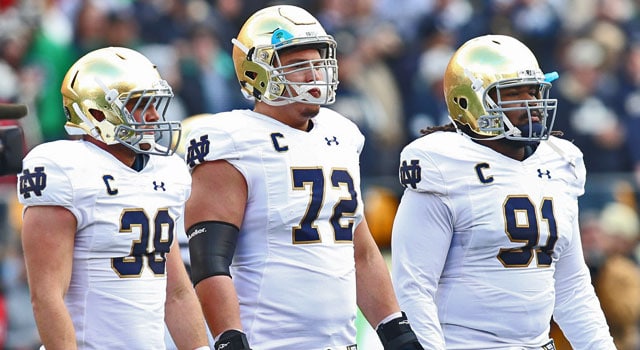 Fresh off moving into the College Football Playoffs Top 4, Notre Dame looks to continue its winning ways and cap off an undefeated home schedule (at least in games played in Notre Dame Stadium since next weekend is technically a “home game”).  With lowly Wake Forest on the slate the keys to victory this week are more like objectives to reach in victory, but here goes.

Senior Day was always a weekend that Lou Holtz used to be scared of and the tale of Senior Day let downs at Notre Dame should be all Brian Kelly needs to motivate his troops today.  This weekend should not add to those tales, however, unless things go very, very wrong.  Notre Dame is a 27+ point favorite this afternoon and the score should really not be close by half time.  But those Senior Day emotions can sometimes lead to sluggish starts.  If Notre Dame comes out focused, this one will be over early and all of the seniors will get a chance for one more – or maybe even a first – time on the field of Notre Dame Stadium.

Trick plays have haunted Notre Dame this year until the Irish defense finally stopped them against Pitt.  Don’t expect Wake to put their bag of tricks away though.  The Demon Deacons are going to throw the kitchen sink at Notre Dame today because they know they will need to hit on a couple of trick plays to keep this game interesting.  They just don’t have the horses to stay in this race without some gadgets along the way.  If the Notre Dame defense plays disciplined, they shouldn’t have a hard time keeping Wake off the scoreboard for most of the afternoon.

The injuries Notre Dame has been able to overcome this year have been well documented but we are at a point where the Irish simply can’t sustain anymore serious ones and still have a legit shot in the playoffs IF they are able to make the Final 4.  Last week we got a big scare when CJ Prosise went down with an injury and then lost Equanimeous St Brown for the year most likely this week in practice.  Let’s have a clean game and return to the locker room at the end of the day without any injuries.

Speaking of Prosise, his status is still questionable but if there was ever a weekend that Brian Kelly could afford to rest him, it’s this one.  Let CJ run into the field and hug his parents at midfield before the game and then take his helmet from him and let Josh Adams and Dexter Williams run wild this afternoon.  Adams looked like a beast against Pitt and getting Williams some carries and more experience will only increase the depth in the backfield.  If Prosise had suffered any other injury than a concussion it would be tempting to let him have a few carries – maybe bear the goalline to score a TD on Senior Day – but it’s just not worth it.

Keep getting Tori Hunter involved on both sides of the ball

We were all surprised to see Torii Hunter on the defensive side of the ball last week against Pitt and with the lack of depth in the secondary right now, it was great to see him step right in and play well.  Kelly and Brian Vangorder should get him some more reps at nickel this weekend while they can.  Kelly and Mike Sanford should also keep getting him involved on the offensive side of the ball where he is finally becoming the weapon we all envisioned he could be before that gruesome leg injury.  Hunter can be a weapon during the final push for the playoffs – especially as teams pay more and more attention to Will Fuller.

I was hoping that Jones big catches against Temple would parlay over into another big game against Pitt, but Deshone Kizer didn’t look his way too often.  If Notre Dame can establish the tight end as a weapon down the stretch it will make what is already an explosive offense even tougher to defend.  Now, if Wake single covers Fuller like Pitt did it will be tempting to look anywhere else again this week, but if Wake pays extra attention to Fuller, Jones should have room to work in the middle of the field.  A coming out party for Jones today would be a great development for this offense.

Get Chase Hounshell a catch and Josh Anderson some carries

There are other seniors who should get involved by the 4th quarter too, but Chase Hounshell has yet to record a reception this year and after all of his injury struggles it would be great to see him haul in a pass today.  It would be even better if that reception came in the end zone.  Josh Anderson, one of the best examples of  a Notre Dame student athlete, should get some carries as well.  With Prosise likely (hopefully) resting this weekend, there will be some carries to be had.  Get Anderson the ball near the goal line and have the final chapter of his storybook season end one a high note.

Ok, so by my unofficial count in the column, Notre Dame has to score about 10 touchdowns to get everyone involved… boy is it fun to have a dynamic and explosive offense again.  For good measure, I am going to start adding in predictions in these columns as well so here goes.