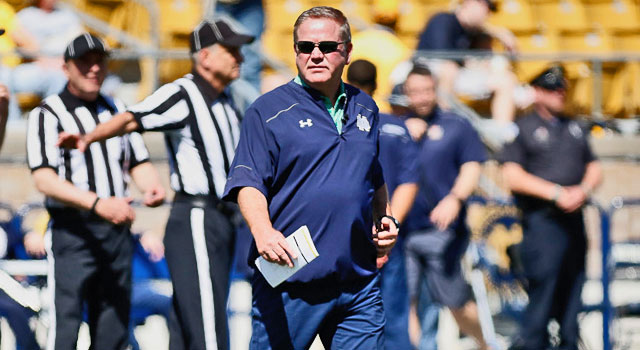 Every year 128 teams have a laundry list of questions surrounding their programs as fall camps kick-off across the country.  For Notre Dame in 2016, their list of questions might be more like the laundry list for everyone on the block.  The Irish lost seven starters on both sides of the ball, are facing yet another quarterback battle in fall camp, and still don’t know if Brian Vangorder’s defense is the answer.

The questions don’t stop there though.  Here’s 16 different questions facing Notre Dame and Brian Kelly as the Fighting Irish head into the seventh year of the Kelly Era.

1. Who will be THE quarterback?

Let’s get the most obvious one out of the way.  Deshone Kizer and Malik Zaire are about to have a heavy weight battle to be the starting quarterback for Notre Dame in 2016.  Kelly has said that he doesn’t want to flip flop and doesn’t want to play more than one quarterback so whoever wins the battle will have a long leash.

Kelly and Mike Sanford will have to balance having a thorough competition while also maximizing the reps of the eventual winner so look for this battle to drag out for a while, but not too long.   If Kelly and staff don’t know who their starting quarterback is – even if they don’t tell us – two weeks out before Texas, there could be a problem.

Vangorder is entering his third season in South Bend and thus far the results have been sub par.  Notre Dame’s defense couldn’t keep Stanford off the scoreboard for a mere 30 seconds in the season finale and then surrendered 42 points to an Ohio State squad that struggled on offense most of the season.  Brian Kelly has talked all off-season long about how the Irish are now in a position to see the benefits of switching from Bobby Diaco’s 3-4 defense to Vangorder’s 4-3 front.  Critics, however, have argued that his defense is too complex for the college level and the problem hasn’t been talent or personnel.  After three years under his guidance and recruiting to fit the scheme we’ll know who is right this fall.

3. Who will emerge as leaders?

Whenever you lose 14 starters you lose a ton of leadership leaving a huge void in that department.  Notre Dame has a few returning players who have been in the program for a while that could fit the mold, and leaders have already likely emerged behind the closed doors of off-season workouts.  Should Malik Zaire edge out Kizer he is the most obvious choice for being a captain.  Even last year as a junior his leadership qualities were undeniable.  Mike MgGlinchey as the elder statesmen on the OL seems likely as well.  Seniors Tarean Folston and Torii Hunter could be options as well.

Leaders on defense might be a bit tougher to identify.  Both Jarron Jones and Isaac Rochell have the experience, but neither has shown a Sheldon Day type personality or leadership capability in the past.  Given the opportunity to step out of Day’s shadow however could bring those qualities out of either lineman.  James Onwaulu is the most experienced defensive player and has exhibited leadership qualities since enrolling.

Identifying who those leaders are early on in camp will be vital to success in 2016.

This might be the most important question of all.  Notre Dame has been ravaged by injuries the last two seasons.  In 2014 it lead to a second half nose dive.  In 2015 the Irish suffered even more key injuries but still managed to win 10 games and make it to the Fiesta Bowl.  If Notre Dame can finally stay healthy this year, the schedule aligns very nicely for a playoffs run.  Given all of the youth and inexperience the Irish enter fall camp with though, another rash of injuries in 2016 could lead to a disappointing season.

Notre Dame couldn’t even make it out of fall camp unscathed last year losing Jarron Jones and Shaun Crawford within the first two weeks.  Hopefully the Irish can at least escape August without any self inflicted wounds this year.

5. How will the linebacker lineup shake out?

Perhaps no position group is as up in the air as linebacker heading into camp.  The names of the starters are fairly well set but positions aren’t.  Nyles Morgan will man the MIKE but other than that, anything can happen.  Could Notre Dame work a unit of Morgan, Greer Martini at SAM, and Tevon Coney at WILL?   Personally that grouping has me the most excited, but would the staff really move Onwualu out of the starting lineup and into a more hybrid, specialist role?

6. Speaking of linebackers, Is Nyles Morgan really ready to shine?

Notre Dame fans clamored for Nyles Morgan to replace Joe Schmidt  all last year.  It won’t be long before we know if Kelly should have listened to them.  Morgan will be the starting MIKE for Notre Dame and the hype has been building for him all off-season long.  For the Notre Dame defense to improve this year, Morgan has to be an improvement over Schmidt.

Freshman early enrollee Devin Studstill appeared to overtake Mac Redfield at free safety but some rumblings are Redfield will be back a top that depth chart when camp opens next week.  Can Redfield finally live up to his 5-star pedigree or will Studstill come in and steal the show?  Based on Studstill’s impressive spring it’s at least safe to assume at this point that Redfield’s margin for error is razor thin.

8. Who starts at right guard?

Even with three starters along the offensive line gone, there is only one spot really up for grabs heading into camp – right guard.  Alex Bars should lock down right tackle and Sam Mustipher more than penciled in his name at center during the spring.  That leaves Hunter Bivin, Tristen Hoge, Colin McGovern, and the incoming trio of Tommy Kraemer, Liam Eichenberg, and Parker Boudreaux fighting for the last spot.  Bivin likely leads but don’t overlook Kraemer.

9. Is Torri Hunter ready to be a #1 wide receiver?

Will Fuller has passed the baton over to Torii Hunter that he received from TJ Jones before him and Michael Floyd before him and Golden Tate before him.  Hunter has shown flashes throughout his career but we won’t know for sure if he’s ready to be the #1 target in this offense until the Irish travel to Austin.

10. Where does Alize Jones line up?

Notre Dame lined Jones up at the W receiver position in the spring and he liked it but can he be effective full time as a wide receiver will tipping the scales at over 240 lbs?  Jones could end up playing more of a hybrid role this year and split out wide a lot like Tyler Eifert was in 2012.  He could also be in store for a role similar to what Devin Funchess played for Michigan a few years ago as well.  His role might be unresolved but it would be a shock if he wasn’t a prominent feature of the Notre Dame passing game in 2016.

Outside of the early enrollees, no player was more surprising this spring than Corey Holmes.  Largely written off by most following a redshirt sophomore campaign, Holmes seemingly came out of no where to stake claim at the slot receiver position.  Holmes didn’t have much competition with CJ Sanders sidelined, but to his credit he made the most of his opportunity.  Will he continue his ascent in camp or will Sanders come back healthy and take over the position?

12. Who will be Notre Dame’s red-zone target?

13. What role will Daelin Hayes play?

Hayes might be the answer to Notre Dame’s pass rush problems.  He reportedly had a stellar off-season in the weight room and finally healthy, he could play very early on this season.  Still, he is a true freshman who has a history of shoulder problems.  Will Notre Dame be able to count on him in 2016 to be a pass rush specialist?

14. Will the tight end position produce like Notre Dame fans are used to again?

Tight end production plummeted for Notre Dame last year with Smythe out and the Irish forced to rely on an inexperienced group.  With Smythe healthy and the rest of the group a year older and experienced, can the position once again be a strength? Having a force at tight end would certainly go a long way towards fixing those red-zone woes that have become all too familiar.

Notre Dame has not had a pass rusher able to strike fear into opposing defensive since Stephon Tuitt left following his junior season in 2013.  The Irish have struggled the last two season to get to opposing quarterbacks even with Brian Vangorder’s exotic blitz schemes.  Outside of Daelin Hayes Notre Dame will be looking to Andrew Trumbetti and Jay Hayes to provide a pass rush from the weak-side.  If neither can, the Irish will struggle to take down opposing quarterbacks again this year.

16. How will Notre Dame divide the carries?

Tarean Folston was the unquestioned top back heading into 2015 before his ACL injury opened to the door for a 1,000 yard season and 3rd round NFL Draft selection for CJ Prosise and a freshman rushing record for Josh Adams.  Will Folston be Wally Pipped by Adams?  The two are different backs and regardless of who is the top back both will play a lot, but I think we’ll see the steady and well rounded Folston get the most carries each week.

At the same time, the staff has to find a role for Dexter Williams in the running back rotation.  The Florida native showed in the Blue-Gold game he is simply too talented to keep off the field.  Autry Denson has a wonderful problem to have with o many talented backs.

Lots of questions and not a ton of time to find them before the Irish make that trip to Austin.  In a perfect world Kelly and his staff would have them all solved by Labor Day but in all likelihood many of these questions will loom into the season and some could even go unresolved all year long.  Should that happen, a run a the playoffs most likely won’t be in the cards for Notre Dame.  If the staff can answer most of these questions throughout the season, we could be in line for a fun season.