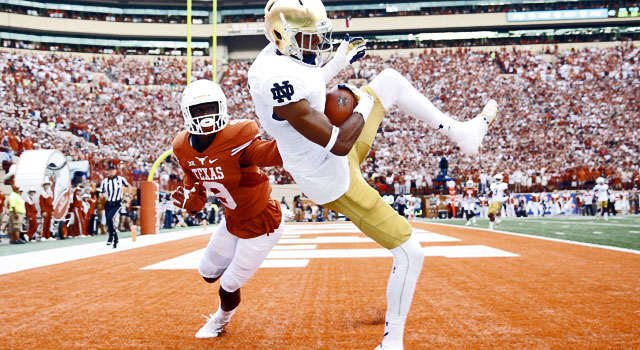 We’re giving our weekly Notre Dame players of the week a little twist this season.  Instead of the “Shamrock Stickers” we’ve handed out in the past, we’ll be doing a weekly “4 Horsemen” ranking of the four best players of the week.

Each week we’ll rank the players of the game for the Irish and award points to them based on their ranking: the “first Horseman” will get 40 points, and the “fourth Horseman” will get 10.  Throughout the year we’ll have a standings updated each week as well.

This week’s is tough to write following such a heartbreaking loss to start the season, but despite the negative outcome, there were a few positives for the Irish.

One of the few bright spots in an otherwise dismal defensive performance was the starting debut of Shaun Crawford.  Despite getting beat deep once – what defensive back didn’t – Crawford was strong in his debut and picked up his first career interception in the third quarter.  In addition to his pick, Carwford also scooped up Jarron Jones’ blocked extra point and raced down the field to tie the game at 37 after Texas took the lead with just under 3:30 remaining.

Sanders was his Mr. Everything self on Sunday night with 3 catches for 55 yards including a 25 yard touchdown on Notre Dame’s first play in the first OT.  Sanders also added a 40 yard punt return in the fourth quarter that set up a Notre Dame scoring drive.  He wasn’t quite as effective on kick returns with a long of just 26 – and he got plenty of tries after all the scoring from Texas.  Still, Sanders showed his versatility and playmaking ability in the loss and made a case for more targets to come his way moving forward.

ESB had a pretty darn good starting debut with five catches for 75 yards and two touchdowns.  Both of his scores came on great plays from the sophomore as well.  On his first, St. Brown got his foot down on a beautifully thrown ball by Deshone Kier.  On his second, Kizer hit St. Brown in stride before getting hit in the legs by a Texas defender and summersaulting into the end-zone for the acrobatic touchdown.  If Notre Dame loses Torii Hunter for next week following the vicious hit that knocked the senior out of the game, Notre Dame will need an even bigger performance out of ESB next week.  Sunday night’s starting debut, however, was a very strong debut.

The question all off-season was who would be the starting quarterback for Notre Dame.  The question wasn’t answered until the game started but Deshone Kizer provided a pretty emphatic answer Sunday night.  Kizer accounted for six Notre Dame touchdowns – 5 passing, 1 rushing – in one of the best performances from a Notre Dame quarterback in a loss in some time.  Kizer’s best stat of the night, however, might have been a zero – as in zero turnovers.  A year ago Kizer’s one knock was his turnovers.  Sunday night he protected the football well though ending the night with 215 yards on 15 of 24 passing with 5 TDs.  He added another 77 yards on the ground on 13 attempts including a 29 yard run.