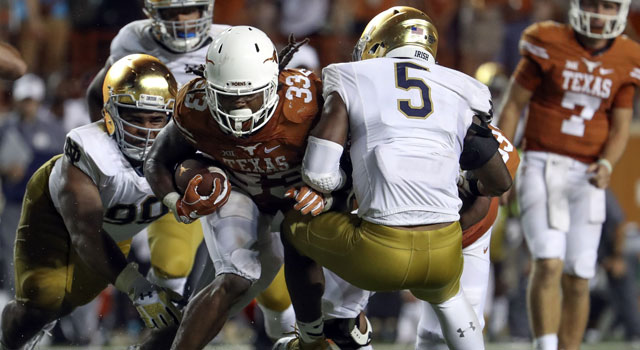 After the offensive explosion from Texas in week one, the Notre Dame defense looked like it could be a train wreck this year.  Last week the Irish returned to their base defense – why they ever left it I’ll never know – and looked a lot more solid.  But it was Nevada after all.  What we can expect of this defense throughout the remainder of the season probably lies somewhere in the middle.

What is clear, however, is this defense does have some talent.  Way too much talent for this unit to be giving up 500 yards and 50 points in any game.  It’s still young and untested in some areas though and whether or not Brian VanGorder’s defense will ever work the way it needs to for Notre Dame to reach its potential is still very much in the air.

For the Irish defense to turn the corner and start playing up to its talent level it’s going to need some more production from a few key players.  And I’m not talking about the true freshmen we’re all hopeful will excel like Devin Studstill or Daelin Hayes.  I’m talking about some players who have been in the program for a little bit of time now who can make a big difference for the Irish in the final 10 regular season games and into the post season.

1. Drue Tranquill – The veteran safety’s season got off to a rough start with a halftime benching in Austin, but he was back in the starting lineup last week. Notre Dame needs Tranquill to step up and help solidify the secondary otherwise they will be forced to rely upon a pair of freshmen on the backend of the defense. Coming off the ACL injury a slow start shouldn’t be completely unexpected but entering week three, the Irish need more production from Tranquill.  A smashmouth, physical game against a team like Michigan State is the exact type of opponent Tranquill was built for.  Hopefully the junior gets back on track this weekend.

2. Nyles Morgan – Morgan has been a sure tackler at the MIKE position. According CFB Film Room, Morgan hasn’t missed a single tackle all season while Joe Schmidt missed 22% of his tackles a year ago.

That is solid production, but some of those tackles are finding him.   What Notre Dame hasn’t gotten out of Morgan yet – and desperately needs – are some negative plays.  Some plays behind the line of scrimmage.  Morgan has made the plays that have come his way, but the next step for him is to go far the plays that aren’t coming right at him.  Morgan’s been one of the heaviest hitters for the Irish defense so far this year.  Now he needs to start using that strength to blow through would be blockers and stuff some running plays in the backfield.

3. Jerry Tillery – Week one against Texas Tillery graded out well from Pro Football Focus despite some missed tackles. Last week though, Notre Dame gregarious defensive tackle was quiet. Notre Dame got great production out of the DT spot last year from Sheldon Day and while the sophomore can’t be expected to completely fill the shoes of his old road game roommate, Notre Dame needs more out of the sophomore defensive tackle.  The talent is clearly there with TIllery.  He has flashed it many times.  He hasn’t yet shown he can consistenly play at a high level though.  A tackle for loss or two this week out of Tillery would be a nice start.

4. Nick Coleman – Even if Nick Watkins is able to return in a few weeks, Notre Dame will be counting on Nick Coleman throughout the season. The sophomore corner made moves up the depth chart last year and looked good in limited action, but has been tormented already this year by opposing offenses. Coleman is going to get picked on this weekend.  There’s no nice way to say it.  Michigan State will be targeting him when Tyler O’Connor drops back to pass.  How Coleman responds will go a long way in determining the outcome of tomorrow’s contest with the Spartans.

5. Jarron Jones – This one may come as a surprise since Jones has made two of the biggest plays of the year for the Irish with a blocked extra point against Texas and a ridiculous interception on a screen against Nevada. What Notre Dame needs more of from Jones though is a push in the middle of the Irish defensive line. Notre Dame needs the bad ass nose tackle that was throwing Florida State offensive linemen out of his way two years ago in Tallahassee.  After his injuries it’s safe to wonder if we’ll ever see that type of performance out of Jones again, but if it’s still in there, Notre Dame needs it – especially this weekend.   We know Notre Dame is not going to get much of a pass rush off the ends until Daelin Hayes is ready to play more so the next best way to generate pressure is from within.  If Notre Dame can start to get a push up the middle from Jones, this defense has a chance to still be pretty solid this year.