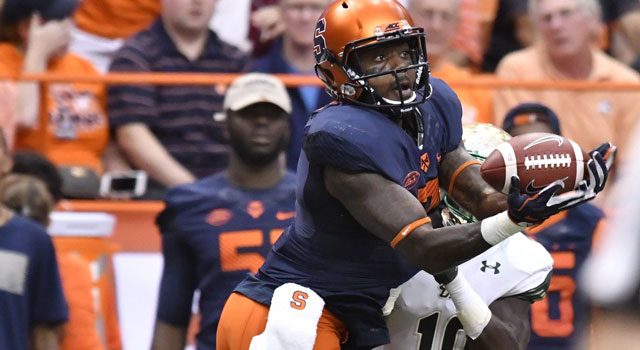 Following a tumultuous week that saw Brian Kelly shake up his staff, Notre Dame hits the road for the first of two straight contests away from South Bend. First up is a neutral battle against a 2-2 Syracuse Orangemen squad that’s coming off a win over Connecticut. Below are seven compelling stats that Irish fans need to keep in mind for Saturday’s Notre Dame Syracuse 2016 clash:

That ratio pretty much defines the Syracuse offense during their four games, with the passing attack having racked up three times (1487 to 499) as much yardage as the running game. Given the pass defense woes of the Notre Dame defenders, that ratio likely sends a chill down the spine of every Irish fan.

The biggest threat that Notre Dame will have to contend with when Syracuse goes to the air is Maryland graduate transfer Amba Etta-Tawo. In just four contests, he’s snagged 40 passes for the above amount of yards. He’s coming off a monster game against Connecticut after grabbing 12 balls for 270 yards and two scores.

That number accounts for the amount of rushing yardage the Orangemen defense has allowed in their two losses. In truth, the Syracuse pass defense has allowed over 200 yards in each of the last three games. However, success on the scoreboard against the Orangemen has been tied to establishing a potent running game, which could mean a greater presence for Malik Zaire. If anything, it will help keep the defense off the field.

In Syracuse’s losses, they’ve been vulnerable to a streaky onslaught of points by their opponents (sound familiar?), specifically 86. Against Louisville, they watched the Cardinals run off 21 points to start the game, then saw them add 20 more to close out the 62-28 Orangemen defeat. One week later, Syracuse jumped out to a 17-0 lead against South Florida, then saw their opponents outscore them, 45-3.

Syracuse hasn’t mustered much of a pass rush this season (also sound familiar?), collecting just seven in four games. Three of those came from defensive lineman Chris Slayton, who also has a pair of quarterback hurries to his credit. Therefore, it may serve the Irish offensive line well to focus their energies on neutralizing him. Establishing the running game early will also do the job.

Thanks to 14 stops last week against Connecticut, including 2.5 behind the line of scrimmage, Orangemen linebacker Zaire Franklin moved into the team lead with 32 tackles. One of those tackles completed a crucial goal-line stand, while a pass deflection was converted into a pick-six that proved to be the difference in Syracuse’s 31-24 victory.

This number focuses on the average number of seconds it takes for every Syracuse play. This high-tempo spread offense helps explain the team’s reliance on its passing game, which arrived when the Orangemen hired new head coach Dino Babers. It also gives even more evidence as to why the Notre Dame offense should strongly focus on their running game.

Grabbing hold of their season before it completely spins out of control is the mantra for Notre Dame in this must-win contest. A third consecutive loss makes even a bowl bid start to become questionable with two Top 25 teams and two other road contests against North Carolina State and USC remaining. In short, the one simple fact for this Notre Dame Syracuse 2016 contest is that the Notre Dame defense has to step up.