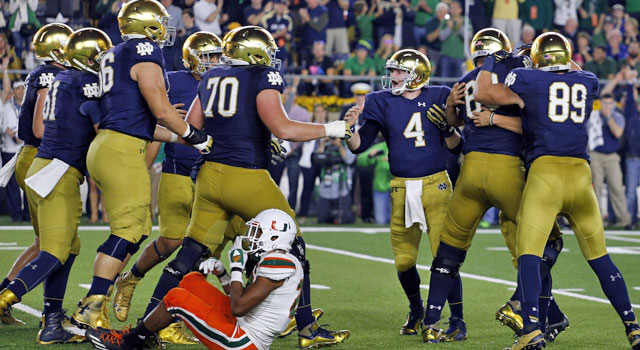 I was five years old when the infamous Notre Dame-Miami game took place in 1988.  I didn’t understand the significance of the game or why, when it ended, my parents celebrated like it was the happiest day of their lives.  Nor did I understand why my parents would watch the tape of the game over and over in the weeks after its ending.  And considering the Hurricanes had not set foot in Notre Dame Stadium in 26 years prior to last Saturday, everything I know of the rivalry lives in grainy footage and stories of Lou Holtz’s famed “Save Jimmy Johnson for me!” pregame locker room speech that still stirs Irish fans to this day.

Saturday’s clash with the Hurricanes had more of a feel of two former greats who are shadows of themselves going another round in their 50s for old time’s sake than a true rematch.   But the chipiness between the two teams is still there and surfaced occasionally, even if the true disdain for one another mostly lies dormant underneath decades of underachievement for both programs.  A win over Miami at Notre Dame Stadium still feels damn good even if beating them is no longer a major accomplishment.

And, at least for me personally, a win over Mark Richt was a long-time coming.  After Georgia’s tough loss to Alabama in the 2012 SEC Championship Richt made comments during a radio interview implying a win over Notre Dame in the national championship that year would have been guaranteed for the Bulldogs had they won the SEC title, a comment that still does not sit well with me four years later.  So handing Richt his first four-game losing streak of his career on Saturday is extra sweet.  If you can’t beat Notre Dame when they’re at their lowest point of the Brian Kelly era, maybe you should stay away from radio interviews for awhile.

As good as it is to finally get back to the win column, this team is far from ridding itself of the problems that have derailed this season.  Chief among those concerns is the play of Notre Dame’s special teams.  Even if you give the special teams unit a mulligan for the loss of possession after Troy Pride was blocked into the ball leading to a turnover, two horrendous plays are left unaccounted for.  Notre Dame was completely unprepared for Miami’s onside kick to the point Notre Dame’s players did not even attempt to run toward the football, and the decision of C.J. Sanders to try and receive a punt off a bounce by the end zone – which provided Miami its first lead of the game – displayed a profound lack of situational awareness, which goes back to coaching and ensuring players are put in positions to succeed.

Notre Dame’s special teams play has been on par with its defensive production under former defensive coordinator Brian VanGorder, creating a fair question: What is the tipping point for Brian Kelly to make a change?  How many games must be lost or put in jeopardy due to special teams errors before Kelly realizes there is a serious underlying problem and a change must be made?  If Kelly is okay with changing defensive coordinators mid-season – which has proven to be an excellent move – why does special teams get a pass?

The offense and its penchant for disappearing throughout large portions of games this season continued against the Hurricanes.  After jumping to a 20-0 lead the offense became completely ineffective even when giftwrapped opportunities.  Miami was flagged for an unsportsmanlike penalty after making the game 20-14, setting up Notre Dame’s offense with possession at midfield.  The Irish needed to stop Miami’s momentum by putting some points on the board.  The offense responded by not only going three-and-out but by failing to gain a single yard (in fact, the offense lost two yards on the possession).

The lone perk of continual inconsistent offensive production is Notre Dame’s defense proved itself against arguably the best offensive attack it has faced all season.  While the offense sputtered interim defensive coordinator Greg Hudson’s squad slowed the Miami offense and held them at bay to a tune of 20 total points, allowing time for the offense to snap out of its funk and finish the Hurricanes off.  Defensive tackle Jarron Jones was an unblockable monster and caused havoc along Miami’s offensive line, and Hudson was able to dial-up blitzes that led to five Irish sacks, an impressive feat considering Notre Dame was the last program in the nation to record a sack this year.

The victory wasn’t pretty and the issues that have plagued this team are far from being fixed.  But Notre Dame beat Miami, and anytime that can be said it’s a good day, no matter what the record is for both programs.