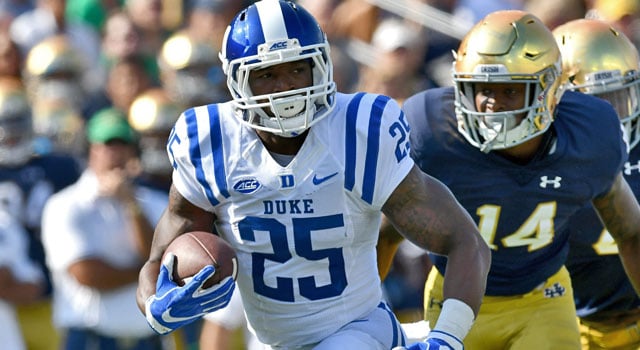 If the Notre Dame defense was looking to boost their confidence against a team that had struggled offensively the past two weeks, that goal failed miserably on Saturday afternoon against a heavy underdog in the Duke Blue Devils. Instead, the Irish defenders were ripped apart for 498 yards, allowing more than 200 yards apiece on the ground and through the air.

During the Blue Devils’ first series, Notre Dame held them to a single yard, the high point of the day. In between that series, the Irish scored a pair of touchdowns and it looked as if the rout was on. Instead, it sparked four touchdowns by Duke before the end of the first half.

Notre Dame couldn’t build any momentum after any solid stops on first down and was especially vulnerable to the run on second-and-long. On five carries in that situation, the Blue Devils collected 76 yards for an eye-popping 15.2 yards per carry.

While the damage wasn’t as bad when Duke went to the pass on that down, they still managed to complete eight of their nine passes. That pecking away by Blue Devil signal caller Daniel Jones was a continuing problem all day, with Jones ending the afternoon connecting on 24 of 32 passes for 290 yards.

Jones regularly found the duo of T.J. Rahming and Anthony Nash open, with the pair combining for 14 catches and 210 yards. Nash’s second score of the day, a 64-yard fourth quarter jaunt symbolized the day for the Irish as a short grab in Duke territory turned into a touchdown, thanks to poor coverage and missed tackles.

That score was especially aggravating, given that Notre Dame had just re-taken the lead midway through the fourth quarter. Jones’ score wiped out any momentum in the span of just 59 seconds and effectively set the stage for the later game-winning field goal.

Failure in the Clutch

When the Blue Devils started their last drive in Irish territory with 5:11 left, the Notre Dame defense had their chance to step up. They didn’t, thanks to consecutive pass receptions garnering first downs that put Duke in the red zone, allowing them to eat up a good portion of the clock.

The Notre Dame shortcomings on pass defense certainly got the attention of the Blue Devils’ offense. One example came when looking at third-and-short plays, where it actually proved to be better strategy to go with the pass. The pass was called on three occasions and converted every time, in contrast to the run splitting its two opportunities.

With the Irish reeling and Brian Kelly indicating in postgame comments that personnel changes are coming, they now begin a two-game road trip, beginning with a neutral matchup against Syracuse. Ominously, the Orangemen are more of a passing team, which could make it another long afternoon for the Notre Dame defense.

Topics
Beyond the Boxscore
Game
Notre Dame vs Duke 2016