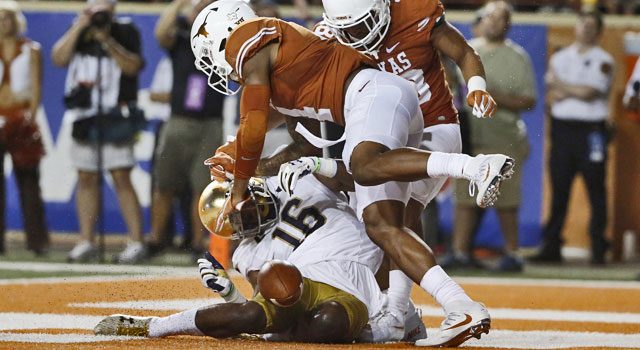 One of the most controversial calls in Notre Dame’s disappointing season opening loss to Texas Sunday night was the no call on the end-zone hit on Torii Hunter that looked an awful lot like targeting to anyone not wearing Burnt Orange.  On Monday, Brian Kelly told reporters that Notre Dame sent video of the hit to ACC officials who confirmed it should have been called targeting.

BK says they sent the targeting clip to the ACC officials. Confirmed that it would have been a targeting call. They will reach out to Big 12

Kelly also told the media that they will be asking the Big 12 for clarification on the play.

In case you missed it, the play in question was what looked like a textbook example of targeting by Texas on Torii Hunter Jr in the end-zone on what had looked like it would be a go ahead touchdown.  Hunter was nailed directly in the head as he went to make the catch and ended up leaving the game with a reported concussion.

Hunter obviously was unable to return to action and the Notre Dame offense struggled without him.  Hunter will be going through concussion testing on Sunday and his status for this weekend’s home opener against Nevada is now questionable at best.

Had a penalty been called on Texas, Notre Dame would have had a first down in the redzone with all the momentum.  Without it the Irish lined up for a long field goal that got blocked and the momentum swung back in Texas’s favor.

Notre Dame had plenty of chances to get back in the game and did take the lead later on – albeit a short lived lead.  No penalty flags would have stopped the young Irish secondary from getting burned repeatedly by a true freshman quarterback either – more on that later.

Still, the play in doubt not only cost Notre Dame a potential score, but it also knocked out its starting wide receiver for the remainder of the game and looked much more egregious than some targeting penalties that have gone against Notre Dame over the years such as Stephon Tuitt in 2013 and Elijah Shumate in 2015.

For anyone stating that Notre Dame shouldn’t make a big deal of the play and just move on, Kelly and Notre Dame are absolutely correct in making a big deal of the play so that it gets called next time.  It’s like arguing bad penalties when they happen – you rarely get the call overturned but you are in essence arguing for the next call.  That’s what Kelly and Notre Dame are doing here and that’s exactly what they should be doing.  Well that and trying to fix that defense but again, more on that later.