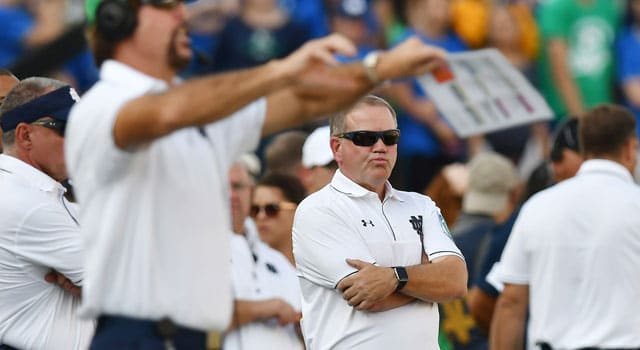 Following Notre Dame’s latest loss – an embarrassing home loss to Duke – head coach Brian Kelly was quick to point the finger at everyone except those that deserved it the most – his defensive coaching staff that hasn’t taught a roster full of players they selected and recruited basic fundamentals.

[UPDATE: Brian Kelly has pulled an about face on Sunday announcing that Brian Vangorder has been relieved of his duties!]

Notre Dame is not a fundamentally sound football team – especially on the defensive side of the ball where the missed tackles are piling up at record pace. Notre Dame is playing historically bad defense during the reign of terror of defensive coordinator Brian Vangorder.  Good news though, the problem isn’t the coaching.

“Coaching had nothing to do with the outcome today,” Kelly defiantly said to the media following a game in which his defense was a kneel down away from surrendering 500 yards for a third time in four games.

Could have fooled me.

“That’s probably the one area that I feel better about today,” Kelly said regarding his defensive coaching staff.  “We did what I wanted today in terms of coaching.  “There are things that I want to get better at defensively, there’s no question. But that’s the least of my concerns after today.”

This isn’t the first time Kelly has stood behind his staff following terrible defensive performances this season.  Kelly backed Vangorder following the losses to Texas and Michigan State as well and up until this point, I had given Kelly credit for publicly supporting them.

Today, however, Kelly wasn’t shy about calling out his players for poor execution or their lack of emotion.

When asked about the last two Notre Dame drives, Kelly again gave his staff’s coaching a pass. “Poor execution. Poor, poor execution. I like what we called. I liked the looks that we had, and we did a poor job executing.”

Perhaps sensing that he was putting too much of the blame on his players, Kelly finally admitted the coaching staff needs to do better as well. “Listen this is not all on our players, we still have to coach better as well. There’s a lot that we have to do,” Kelly said,  “I’m a 1-3 coach, we’re all 1-3 coaches, so we’re in the same boat as all of our players. So let’s be clear on that.”

Last I checked his staff was collecting a paycheck to coach football at Notre Dame.  And they are doing a bad job of it right now.  Kelly can talk about poor execution, players having bad tackling form, and players being out of position all he wants, but at the end of the day, it’s his and his staff’s responsibility to teach those fundamentals.

When an entire defensive unit is so fundamentally bad at tackling, the problem is much deeper than poor execution. It goes back to what was taught and worked on in spring and fall camps.  Fundamentals are developed in camp.  Game plans are developed week to week.  All of the evidence at hand this season suggests those fundamentals were not taught well by the defensive coaching staff heading into the season.

It’s also on Kelly and his staff to have these players ready to play each week and notice if they “lack grit and fire” before they run out of that tunnel each Saturday.  Coaching is more than just drawing up a gameplan and expecting the players to execute with perfection.

Duke racked up 498 yards and scored 38 points after totaling a combined 27 points on Wake Forest and Northwestern in back to back losses weeks two and three.  But the defensive coaching is the least of Brian Kelly’s concerns?  There’s shouldering the blame for your staff and protecting them from the media and there’s sounding out of touch with reality.

Instead of placing any blame on his defensive coaching staff, Kelly harped on the execution of an offense that had 534 yards of total offense.  While the offense was far from perfect on Saturday, that side of the ball hardly deserves all of the blame.

“We put our defense in a bad situation today and they gave our offense a chance to win, quite frankly.   Those turnovers were deadly and obviously the kick off return for a touchdown just put us in a tough situation,” Kelly said as if forgetting that a defense can occasionally make a stop on their own.

After refusing to criticize his defensive coaches, Kelly didn’t offer the same media protection for his starting quarterback.  “Below standard. It’s not acceptable, his play,” Kelly said of Deshone Kizer.  That is the same Deshone Kizer who threw for 381 yards and has now accounted for 16 touchdowns this season.

Kizer, despite the stats, did not play his best game and left a lot of plays on the field.  He also didn’t deserve to be thrown under the bus by his head coach while the defensive coordinator in charge of one of the nation’s statistically worst defensive gets a free pass week in and week out.

So to recap, Kelly feels that the defensive coaching staff which is being paid to coach football is the least of his concerns but the play of his starting quarterback who is the only reason Notre Dame was even in the game against Texas and Michigan State is “unacceptable”.

Am I taking crazy pills?

I didn’t disagree with everything Kelly said on Saturday though.

“I must be doing a poor job. I’ve got to do a better job of finding out what those things are that are putting our football team in that position. But we got to have more of it.”