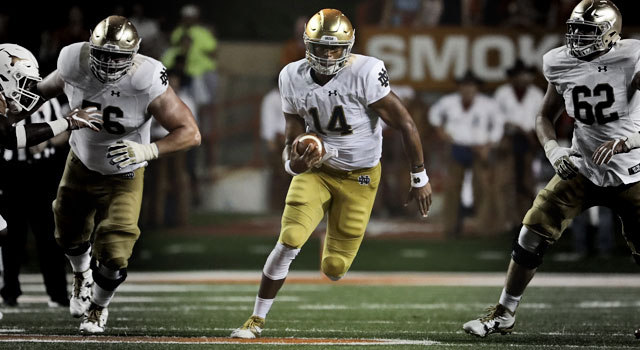 “There’s one quarterback now, but there’s still two leaders,” Kizer told the media Wednesday.  “We’re still going to lead the exact same way.  Malik doesn’t fall off the face of the earth now.  He’s a huge component to this team and he’s going to go out and lead the same way he’s been leading.”

Wednesday’s news should come as no surprise.  Kizer was nothing short of brilliant against Texas as he accounted for all six Irish touchdowns (5 passing, 1 rushing) in their 50-47 2OT loss in Austin.

Kizer’s final stat line included 15 of 24 passes for 215 yards with the 5 touchdowns.  He added another 77 yards on the ground with a 29 yard touchdown.  His most important stat of the night however might be ZERO.  As in ZERO turnovers.  Kizer protected the football better than we’ve seen in the past while displaying a command of the offense.

Kelly was committed – maybe to a fault – to give both quarterbacks equal opportunity in the opener even when Kizer was moving the Irish offense and Zaire wasn’t.  Kizer clearly outplayed senior Malik Zaire in the first half as the pair alternated drives.

After Kizer got the Irish in the end-zone twice in the first half while Zaire struggled to pick up first downs, Kelly sent Zaire out for Notre Dame’s first drive of the second half even though the Irish trailed by 14 at the time.

Zaire’s first and only second drive was his last.  Kizer came back on the field and grabbed hold of the starting quarterback position in leading the Irish to 21 unanswered points and momentarily taking the lead before the leaky Notre Dame defense surrendered yet another late game lead.

In reality though, there was no decision to be made.  Kizer earned the right to be Notre Dame’s starting quarterback with his performance against Texas.  Based on how Kizer played once he got into a groove, many will ponder what would have happened Sunday night had Kizer had those three drives that produced zero points while he stood on the sidelines.

Those lingering questions will only grow louder if Kizer comes out this weekend against Nevada and plays at a high level once again.  How much damage Kizer does with his arm will be interesting to see since Nevada surrendered an insane 383 yards rushing last weekend to Cal Poly in their three point over time victory.   Yes you read both of those stats correctly.

Kelly had to make a decision now – even if he still wants to give Malik Zaire a chance to play.  Notre Dame needs something to rally around and having a single starting quarterback could be that rallying point.  The Irish have zero margin for error the rest of 2016 if they want to have any chance at their ultimate goal – a playoff berth.  Perhaps this will re-energize the Irish coming out of their disappointing opener.

Naming a starting quarterback won’t, of course, solve the numerous problems exposed with the Irish defense, but hey, the Golden Dome wasn’t built in a day.