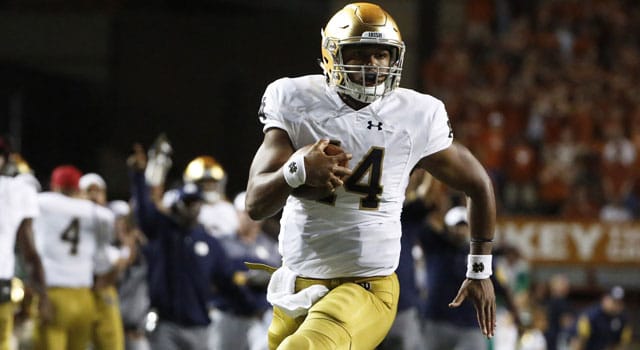 Notre Dame returns to action this week after its heartbreaking and disappointing season opening loss to Texas on Sunday in Austin.  The Irish face a familiar face this weekend with former Irish assistant Brian Polian bringing his Nevada squad to town on the heels of their OT win over Cal Poly.

Notre Dame’s season now has zero margin for error and needs to get back on track in a hurry with #8 Michigan State on the schedule next weekend.  Luckily for the Irish a team that needed overtime to take out Cal Poly should allow for Notre Dame to get things turnaround before the Spartans visit.

How’d I Do Last Week?

What Concerns Me this Week

What Doesn’t Concern Me this Week

With Nevada giving up almost 400 yards on the ground last week conventional wisdom says that Notre Dame should run, run, run this weekend.  With its running backs a bit dinged up and a bruising Michigan State on the docket next weekend, Kelly may want to save some hits on his backs this weekend.  He may also want to let his newly named starting quarterback air it out a bit this weekend.

However Notre Dame decides to attack Nevada, it shouldn’t have any problem.  In fact, this is the kind of opponent that Notre Dame shouldn’t game plan around and outsmart itself.  They should come out this week and play their offense and play their defense and dictate the pace to Nevada.