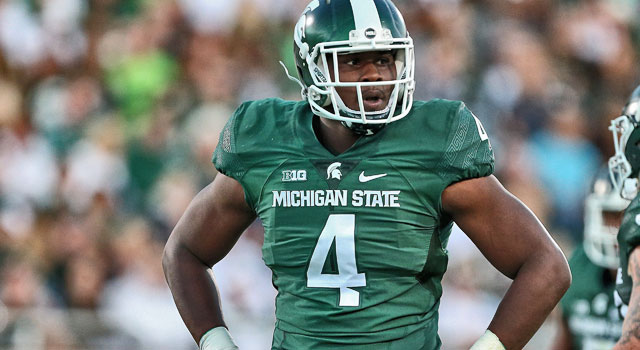 Two consecutive games with exactly 444 yards of offense in each contest would seemingly have the Notre Dame offense already in midseason form. However, a more accurate barometer on this side of the ball will be available late Saturday night after this Notre Dame Michigan State matchup is completed.

Malik McDowell is the most dangerous weapon the Spartans have on their depleted defensive line. Though he’ll likely be primarily situated at nose tackle, he may be shifted around in order to force the Irish to keep track of where he is on the field.

Riley Bullough is the leader of Michigan State’s potent linebacking corps, which also has Chris Frey and Jon Reschke to supplement this strength. Even the depth in this area is impressive, with Ed Davis back after missing last season due to a torn ACL.

Experience in the secondary is evidenced by the presence of two seniors and a junior among this group. The problem in this Notre Dame Michigan State 2016 battle may come if they aren’t able to mount much of a pass rush. That’s because it puts corners Darian Hicks and Vayante Copeland, who’ve had their share of injury problems, on the spot and also heightens the pressure of safety Demetrious Cox.

Match-Ups That Notre Dame Can Exploit

The fact that Furman was able to keep pace at Michigan State for much of their September 2 game was due in part to their ability to run the ball. Being able to convert on third and fourth downs on a number of occasions aided that cause.

The Spartan defense had actually kept Furman in check early, but that consistency slumped toward the end of the first half. The limited help from linemen other than McDowell shows that this segment of the defense hasn’t quite meshed.

Michigan State linebackers accounted for 25 tackles against Furman, living up to their preseason hype. Maintaining that level of play in this Notre Dame Michigan State matchup will obviously be a more challenging task, yet Brian Kelly needs to find a way to make sure they’re neutralized in some fashion over 60 minutes of action.

Getting the Irish offensive line, its linebackers and fullbacks to keep them contained will be a challenge in this Notre Dame Michigan State 2016 clash, given the mobility of those defenders. Accomplishing this task will help the running game eat up the clock.

A key reason why Michigan State struggled against Furman was 120 yards worth of penalties, the Spartans’ highest amount in nearly five years. A number of them were simply dumb, including a personal foul that negated a sack. The Notre Dame offense can’t expect MSU to follow suit here, especially after two weeks of browbeating by Mark Dantonio. Establishing the ground game early may end up being what determines the fate of the Irish.