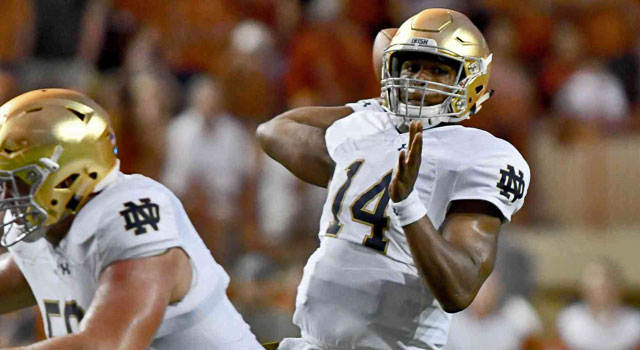 Our friend Matt from Sportscrack.com is going to be sharing his weekly Heisman Poll with us here at UHND.com moving forward.

Now three weeks into the season and we have a clear cut #1 Heisman frontrunner.

1) Lamar Jackson, QB, Louisville – Absolutely shredded FSU for 63 points in a nationally televised game between two top 10 programs with ESPN’s College Game Day there to take notice.  Action Jackson’s 5 touchdowns and 362 yards were too much to handle for FSU.  Jackson himself has 18 total touchdowns this season, more than 118 FBS teams have total for the season.  Here are some more plays for the Jackson highlight reel…

2) Christian McCaffrey, RB, Stanford – Just another 260 all-purpose yards and 2 touchdowns in a rout vs USC.  McCaffrey leads the nation in all-purpose yards per game and will again get to show Heisman voters his athletic prowess in a prime time battle vs UCLA.

3) Donnel Pumphrey, RB, San Diego State – The nation’s leading rusher was at it again running for 220 yards and 3 TDs.  He’s averaging 200 yards per game and has scored 7 TDs.

4) J.T. Barrett, QB, Ohio State – Barrett played great on the road at Norman in a huge out of conference win vs the Sooners.  4 touchdown passes while competing 70% enhances his season statistics to 13 TDs with only one turnover in 3 games.

5) Greg Ward, QB, Houston – Coming off a sore shoulder it took Ward sometime to knock off the dust vs Cincinnati but once he did he was as elextric as usual.  326 yards passing while accounting for 3 TDs in a 40-16 win will keep Ward in the top 5.

6) Jabrill Peppers, LB, Michigan – I’ve never been the biggest fan of Peppers (in fact he was one of my most overrated players going into this season) but I watched his game vs Colorado and he was simply amazing.  Whether it was returning punts for a score or making devastating hits on defense if Michigan runs the table Peppers will get an invite to NYC.

7) Patrick Mahomes, QB, Texas Tech – 470 yards passing and 5 TDs in the air.  Mahomes also added a TD on the ground and through 5 games he’s averaging nearly 500 yards per game.  The gun slinger just needs to keep it going, win a bunch of ball games and let the chips fall.

8) Leonard Fournette, RB, LSU – Buga looked like his old self after coming back from an ankle injury.  130 yards and 2 TDs were just part of his overall trucking and stiff-arming the defense and leading LSU to a big W.  I could watch this “stiff-arm” aka throw down all day…

9) Myles Garrett, DL, Texas A&M – Facing double and sometimes triple-teams in order to contain Garrett has not worked.  He’s got 3 sacks and has been a terror on the edge for the undefeated Aggies.  Right now Garrett looks to be the one guy who could beat Bama by himself.

10) Deshone Kizer, QB, Notre Dame – Kizer didn’t have his best game in a loss vs Michigan State but he still threw for 344 yards, 2 TDs in the air, and another 2 TDs on the ground.  Through 3 games Kizer has 13 TDs and only 2 turnovers but ND is going to need to start winning if Kizer is to remain in the conversation.

Matt Fairchild grew up a fan of the Notre Dame Fighting Irish, Baltimore Orioles, Atlanta Braves and Atlanta Falcons.  In other words he has a sports team problem on top of his drinking problem.  Displaying a loyal, never-ending-love for his teams despite their consistent struggles to return to their “glory days” only shows the insane ramblings that permeate his controversial sport writings.  Fairchild started SportsCrack.com in 2005 where you can find great t-shirts and sports merchandise.  He can be reached at matt@sportscrack.com or on Twitter @sportscrack