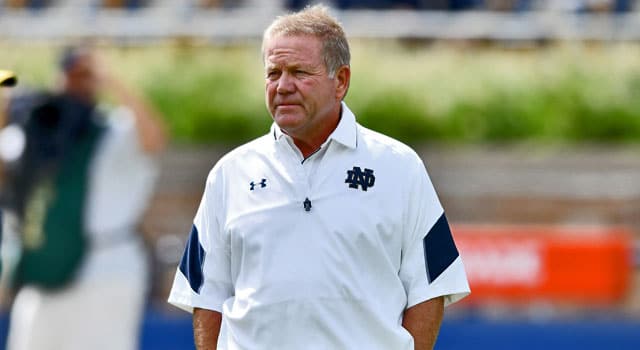 Notre Dame had the chance to make a statement on Labor Day weekend.  Prime time match-up.  Only game of the day.  Notre Dame could have told the college football world that the Irish were a team that reloads, not rebuilds.  The Irish fell well short by allowing 50 points to a true frosh quarterback.  Notre Dame has a chance for redemption this weekend when it hosts 2015 playoff participant Michigan State.

Michigan State isn’t rolling into town this weekend with a ton of momentum following their uninspiring 27-14 opening weekend victory over mighty Furman and then a ridiculously early bye week.  Still the Spartans won the Big 10 last year and were 12-2 including their drubbing at the hands of Alabama in playoffs.  The Spartans also sports a top 10 ranking this season depending on which poll you look at.

This isn’t the same Michigan State team that went to the playoffs, but Mark Dantonio’s crew has averaged 12 wins a season the past three years and has won the Big 10 twice during that span.  It’s also a team that Notre Dame can beat this weekend.

Notre Dame hasn’t exactly taken care of business against highly ranked teams recently though.  The Irish have fallen flat in 8 of its last 10 games against teams ranked in the top 15 and one of those wins came against a Georgia Tech team that proved to be down right terrible last year.  The other was a solid win over then #14 ranked Stanford at home.

Most of those losses have come on the road where the Irish have struggled to say the least.  At home, however, the Irish have been strong against top 15 opponents under Brian Kelly.  The only loss a Brian Kelly coached team has had in Notre Dame Stadium to a top 15 team was the 2013 loss to Oklahoma when Tommy Rees turned the ball over twice in the game’s first few minutes and dug a hole the Irish could never crawl out of.

One of those four wins was against Dantonio’s 15th ranked Spartans in 2011 when the Irish limped into Notre Dame Stadium with a 0-2 record following losses to South Florida and Michigan.  Notre Dame came out that afternoon and took it to the Spartans to the tune of 31-13.  Michigan State finished that season 11-3.

The Irish have plenty of flaws coming into this contest.  The secondary is young and has been beat deep entirely too much already this year.  The pass rush has failed to register even a single sacks through two games – something only two other programs in the entire country have failed to do as well.  And serious questions still linger regarding the validity of Brian VanGorder’s defensive scheme.

Even with all those flaws, the Irish are currently a 7.5 point favorite over Michigan State and the line was as high as (-8) at one point.

Obviously I’m not the only who thinks Notre Dame can win this game.

A win for the Irish won’t vault them back into the top 10 and won’t make them a playoff favorite by any means at this point – plenty of work needs to be done for that to happen.  But a win does change the narrative of the season for Notre Dame from a team rebuilding to a team chasing the playoffs.

Heading into the season many were torn between thinking this was a team a year away or a team that could be very dangerous by the end of the season if it could survive September virtually unscathed.  The loss to Texas knocked Notre Dame down but not out.  As the Irish sit at #18 in both polls with plenty of chances to impress the playoff committee remaining, the Irish would be right in the thick of the playoff discussion the rest of the season if they continue to win.

A loss this weekend though and it will be impossible to look at Notre Dame as much more than a team rebuilding and looking to next year.  The Irish would be 1-2 with games remaining against Stanford, Miami, and USC and would fall outside of the top 25 for the first time since the end of the 2014 season should they stumble against the Spartans.

In year seven of the Brian Kelly era, that scenario should be viewed as unacceptable.  Notre Dame has a lot of new starters and suffered a big blow when Shaun Crawford was lost for the season last weekend, but that’s college football.  Every program loses starters to graduation and the NFL every year and every team loses players to injury.

Notre Dame is now 6-9 against top 15 teams during the Brian Kelly era and it’s time that record starts trending up and eclipses .500.  To Kelly’s credit, that record is an improvement over his predecessor.  Charlie Weis was an embarrassing 1-11 against teams in the top 15.  That’s right – just a single win against a team in the top 15 for Weis and that was the first top 15 opponent he ever faced at Notre Dame (Michigan 2005).

This isn’t just a Notre Dame can win, it’s a game Notre Dame has to win if it wants to be considered among the nation’s elite programs again.  Michigan State has had just as much turnover as the Irish have from a year ago and Notre Dame will be playing at home as a touchdown favorite.  A win won’t erase the loss to Texas, but it will set the Irish up to be in the conversation and show that this is a team that reloads.

This weekend’s contest will no doubt make a statement about where Notre Dame is as a football program.  The outcome will determine if that’s a statement Notre Dame fans want to hear or not.