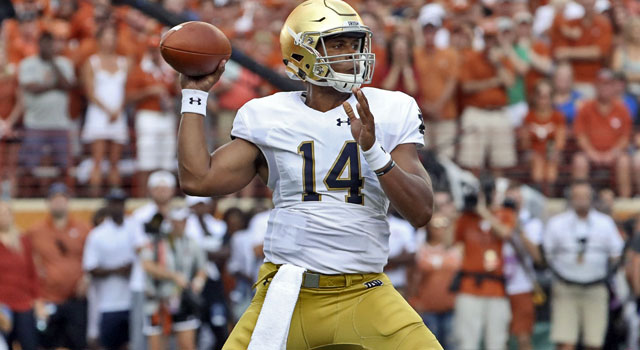 And you thought you had a hectic Wednesday.

The hype train for Deshone Kizer left the station Sunday night in Austin following his six touchdown performance in Notre Dame’s season opening loss.  By Wednesday, even before being named the starting quarterback for the Irish, that train was full steam ahead.

247Sports’s Week 1 Heisman Watch poll has Kizer ranked 3rd this week behind only Florida State’s QB Deondre Francois and Louisville QB Lamar Jackson.  Here’s what they had to say about Kizer.

The Irish may have fallen to Texas in the season opener, but it certainly wasn’t the fault of Kizer, who looked like a potential No. 1 overall draft pick in dissecting the Longhorn secondary when he was on the field.

247Sports isn’t the first to mention Kizer in the Heisman discussion.  In August, NFL.com’s Daniel Jeremiah picked the junior signal caller to win the award this year even though at the time Kelly had just announced he would be playing two quarterbacks.

Why stop the hype train at the Heisman station though?  Bleacher Reports’ NFL Draft Expert Matt Miller pegged Kizer as the #1 pick in the 2017 NFL Draft on Wednesday as well.

The redshirt sophomore from Notre Dame has the arm, football IQ and poise from the pocket and on the move to be a worthy pick at No. 1 overall. He’s young, so there is still room for failure that would push Kizer down the board, but right now, he looks like the best arm in college football and one heck of an athlete to complement it.

Other quarterbacks listed in Miller’s mock are Clemson’s Deshaun Watson at #2 to the 49ers and Miami’s Brad Kaaya at #27 to the Arizona Cardinals.  Miller also has Notre Dame LT Mike McGlinchey going #28 to the Carolina Panthers.

Before we go any further, Miller has the Browns selecting #1 overall and we wouldn’t wish being the next quarterback of the Cleveland Browns on any one – let alone a Golden Domer.  The quarterback position in Cleveland might be the height of futility in all of sports.  Ok now that that’s out of the way.

Hype building for a Notre Dame quarterback responsible for six touchdowns in a prime-time opening weekend matchup that was the only game to watch that day was inevitable.  Add in Kizer’s prototypical NFL measurables and you have the perfect storm for hype.  At 6’4.5′, 230 lbs and the ability to extend plays with his legs, Kizer easily passes the “eye test”.

It is still very early in the season and Kizer has a long way to go before he is firmly in the Heisman race, but if performances like Sunday become the norm for him this season, it’s not far fetched to imagine him making a trip to New York City in early December for the Heisman presentation.

As for the NFL?  That is a long way away as well but again, if Sunday’s performance is any indication of what we can expect from Kizer this year, it’s really not that far fetched.   Kizer of course is just a junior and has two years of eligibility left though so a lot would have to happen between now and April for that to even be a possibility, but it’s clear that Kizer has the attention of the media and as long as he continues to play at a high level, he’ll be mentioned prominently in the Heisman and Draft discussions.