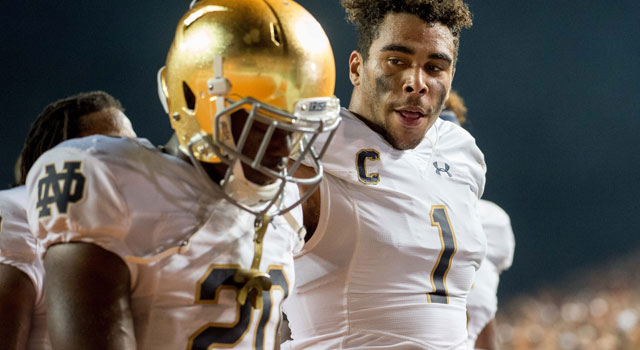 Notre Dame’s defense was shredded last week but one of the bright spots was sophomore Shaun Crawford.  Unfortunately for Notre Dame, the talent sophomore who missed his entire freshman season has torn his achilles on the first defensive drive of today’s Nevada contest and it looks like his sophomore season comes to a crashing halt.

Crawford got beaten in coverage on a deep pass but recovered in time to rip the ball out of the hands of receiver and force what was originally ruled a fumble recovered by Notre Dame safety Drue Tranquill. To add insult to injury, the play was reversed upon review with Nevada retaining possession of the football.

The loss of the fumble pales in comparison to the loss of Crawford who helped solidify the Notre Dame defense when he stayed on the outside in the second half against Texas last week.

Notre Dame is already missing Nick Watkins for at least a few more weeks and is without suspended corner Devin Butler who wouldn’t be available even if he wasn’t awaiting trial a he recovers from a broken foot.  With Crawford out, Nick Coleman who struggled mightily in the first half first Texas last week will be on the outside opposite Cole Luke and will likely be targeted often the rest of today.

Notre Dame’s depth behind Coleman and Luke is almost entirely comprised of freshmen with Donte Vaughn, Julian Love, and Tony Pride the primary frosh who will be in line for playing time now.

It will be interesting to see how this shakes out for Notre Dame as Crawford was one of the players the Irish could least afford to lose.

Your heart has to go out to Crawford as well now that his second season ends in the first quarter of the second game of the year after not even making it out of training camp a season ago.