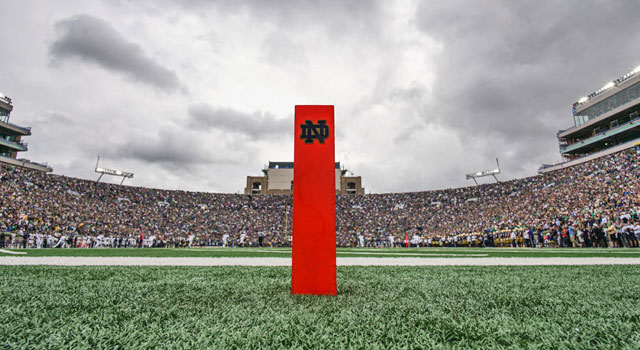 Notre Dame returns to action this weekend following their second loss of the young season.  Notre Dame will look to rebound and get back to .500 as they play three straight “easier” games.  Here’s all the logistics for today’s contest.

Notre Dame is playing Duke today at Notre Dame Stadium.  The Blue Devils enter this game with an identical 1-2 record as the Irish following losses to Wake Forest and Northwestern.

For more background on Duke:

Who is starting at quarterback in the Notre Dame game today?

Deshone Kizer will start again at quarterback for Notre Dame this weekend.  Kizer nearly rallied Notre Dame from a 29 point deficit last week against Michigan State and is still on the fringe of Heisman contention after accounting for 13 touchdowns through three games this season.  Kizer should be able to add to that total tonight.

Where is the Notre Dame game today being played?

What time is the Notre Dame game today?

Today’s game kicks off at 3:30 PM ET / 12:30 PM ET as with all normal Notre Dame home game start times.  This will only be the second time this season that Notre Dame is not playing in primetime.  Those driving home from the home game and those hoping to get to bed early this evening will be saved from another late ending.

Today’s game will be broadcast nationally on NBC just as every Notre Dame home is.  NBC will have Mike Tirico in the booth doing play by play once again with Dan Hicks on assignment.  .  Former Michigan alum Dhani Jones will be joining the pre and post game shows for NBC as well.

UPDATE: The forecast has taken a turn for the better for the second week in a row on gameday.  As of last night there was a 50% chance of thunderstorms but as of this afternoon conditions look great for tonight.  There is still a slight chance of rain tonight but at 15% it should be a dry tailgate and a dry game.  That bodes well for the Irish and bad the livers of Irish fans.

Notre Dame opened as a more than three touchdown favorite even with a 1-2 record and saw the line drop to -19 at one point before rebounding to -20.5 this week.  Early money was on the Dukies but the late money came in on Notre Dame so something things that the Irish will cover.  So far this season, the way the line has trended close to kickoff has been indicative of the outcome.