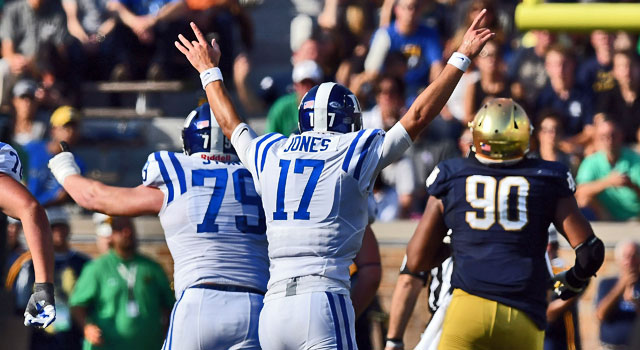 Notre Dame came out on fire on Saturday but by the end of the game the only thing left burning in South Bend were any hopes of salvaging what was already a lost season.  The Irish, ranked #10 just three weeks ago, dropped their third game of the season with the calendar still reading September.

1. Brian Kelly has lost control.  Brian Kelly was more involved with the defense this week and he was shown on the sidelines huddling up with Brian Vangorder and the defense.  It didn’t look like he did a whole lot of talking though.  We’re four games into the season and Notre Dame’s 2016 season has completely unraveled and it doesn’t look like Kelly has any answers right now other than to remain stubborn.

This season is starting to have the feel of that ill-fated 2007 season under Charlie Weis.  Notre Dame lost a ton of talent from a 10 win team and instead of focusing on the fundamentals and coaching up a young team, the Irish grab bagged.  That is what this season is feeling like.  Much like 2007, nothing Kelly is saying after each loss is instilling any sort of confidence that he has the answers or a way to fix this mess.

Kelly has built up enough good will that his job is safe (for those calling for his head) but there really is no way he can stand pat with his staff.

2. This team simply doesn’t know how to tackle.  If there’s been a worse tackling team in the last 30 years of Notre Dame football, I don’t remember it.  For all the talk by Kelly of players being in position and not making plays, it’s on the defensive coaching staff to teach the players fundamentals throughout spring and fall camp.  In that department, they have failed miserably.

On the kick return for a touchdown, Notre Dame missed about three tackles including would should have been an easy one by Nick Coleman.  Time and time again Duke would appear to be headed for a 2-3 yard gain only to rip off 9 or 10.  The play that could sum up this game came when Duke quarterback Daniel Jones was flushed from the pocket and rolled left.  Senior captain SAM linebacker James Onwualu had Jones in his sights.  Jones ran right at Onwualu, put his head down, and drove him backwards for about an extra seven yards.  Onwualu tried to arm tackle Jones around his shoulder pads.

Notre Dame can simplify this defense all it wants and make all the in game adjustments in the world the rest of the season but it won’t matter.  Until this team learns how to tackle, we can expect opposing offenses to have their best offensive outputs of the season each weekend against this defense.

3. The secondary is still a train wreck.  Daniel Jones is a fine quarterback, but he’s not going to be on any Heisman watch lists any time soon.  Still, he lit up the Notre Dame secondary for 290 yards on 24 of 32 pass.  That’s a 75% completion percentage.  He completed 56% of his passes against Northwestern and 65% against Wake Forest.  In those two games he didn’t throw a single touchdown but did throw two interceptions.  Against Notre Dame he threw three touchdowns with just a single interception.

Notre Dame played pretty much anyone and everyone they could in the secondary.  They cycled through players all game long grasping for any answers they could find.  None were found.  Freshman corner Donte Vaughn made a nice interception in the third quarter, but other than that everyone took turns blowing assignments and getting burned.  The problems in the secondary were compounded by the poor tackling.  Duke completed a number of short passes that turned into good gains because of missed tackles.

Where Notre Dame goes from here is anyone’s guess.  There wasn’t a single player in the secondary who could have graded out well on Saturday and they will continue to be picked on until they show they can cover anyone.

4. Deshone Kizer is still streaky.  Kizer had a pretty stat line today but a lot of those stats were pretty empty.  He racked up a career high 381 yards passings but his two turnovers were killers and he missed a lot of throws at crucial times.  Duke’s defense was pretty terrible itself today but Notre Dame let them off the hook a number of times.

Kizer came out like a house on fire with more than 100 yards passing in the first five minutes of the game, but he was up and down for the final 55 minutes.  It’s terrible, but at this point Notre Dame needs Kizer to be perfect to win and it looks like he is playing like he knows that and it’s leading to some missed plays.

Kizer had a chance to lead two drives at the end of the game and neither were pretty.  He missed a WIDE open Equanimeous St. Brown on the final drive for what could have been a game changing play.  He took a sack on the previous drive that killed any momentum the Irish had and then threw a pick that set up Duke’s game winning score.

Kizer is still the most talented passer the Irish have had in a while, but he also still has a long way to go to live up to the #1 overall pick hype that started following his performance against Texas.

5. Notre Dame’s offensive line was extremely overrated.  For the second week in a row Notre Dame couldn’t run the football.  Last week they faced Michigan State so that’s a little understandable.  This week, they faced Duke.  Notre Dame couldn’t get the ground game going and it was clear that Kelly was hell bent on getting it going even when it looked like they could pass on Duke all day long.

Notre Dame ran for 153 yards but Josh Adams averaged just 4.3 yards a carry, Dexter Williams 4.8, and Tarean Folston 3.4.  The running lanes that were there the first two weeks just haven’t been there the last two.

6. This team does not handle adversity well.  Notre Dame jumped out to a quick 14-0 lead in the game’s first five minutes and it looked like Notre Dame might be on cruise control – as they should have been – but then the kick return for a touchdown happened and this team could never recovered the momentum.  Once things start to unravel for this team they get worse and worse.

Last week it was the third quarter when Michigan State ripped off 21 straight points before Notre Dame woke up.  This week they let Duke back in the game with the kick return and then a quick touchdown following a three and out from the offense.

Notre Dame has played in spurts at times this year and in every loss there was a period where the opposing team went on a run that Notre Dame could answer.  Against Texas the Longhorns scored 17 straight to build a 31-14 lead before the Irish stormed back.  Against Michigan State the Spartans scored 36 straight.  Today Duke went on a 28-7 run after the Irish jumped out to their 14-0 lead.