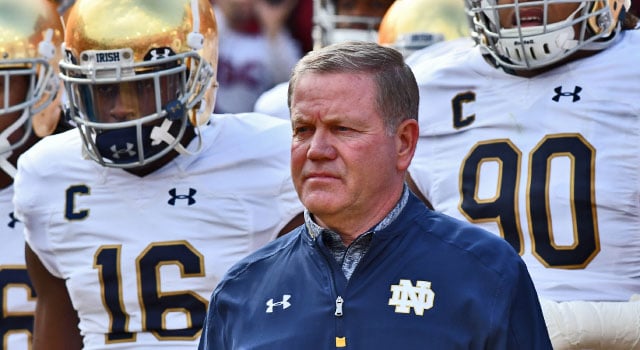 After an unexpected 4-8 season – the second worst in program history in over five decades – Notre Dame athletic director Jack Swarbrick faces a crossroads project with far more long-term implications than the $400 million renovation project of Notre Dame Stadium with the same name.  Whatever direction Notre Dame takes over the next several weeks there is one thing that is absolutely certain: the program cannot have a repeat of the 2016 season.   Given Swarbrick has only two options moving forward, it’s time to evaluate what must be done to be successful moving forward regardless of which path is chosen.

What must be done if Brian Kelly stays

Irish fans may not want to hear it but there are a lot of reasons retaining Kelly for the 2017 season makes sense.  Chief among them is the extremely limited coaching pool currently available.  Tom Herman, arguably the hottest coaching commodity, has taken the Texas head coaching job and rumors have already begun linking Western Michigan University head coach P.J. Fleck to Purdue and Oregon.  But the ultimate cautionary tale for Notre Dame comes from Baton Rouge.  The LSU Tigers fired Les Miles without much of a plan, and after failing to lure Jimbo Fisher away from Florida State and losing Herman to Texas, LSU was forced to hire interim Ed Orgeron, a man with only three full seasons as a head coach and a career record of 21-29.  Brian Kelly may very well deserve to be dismissed but replacing him for the sake of replacing him would be an enormous error in judgment, and one Notre Dame can ill-afford to make.

If Jack Swarbrick decides to bring Kelly back for 2017 due to a lack of a clear and worthy successor than there are two processes that need to be non-negotiable: an impact hire at defensive coordinator and a lengthy evaluation of every assistant coach currently on staff.   An intriguing defensive coordinator prospect is recently fired head coach Charlie Strong.  Strong spent several seasons at Notre Dame in the ‘90s as an assistant coach and led a Louisville defense that was No. 2 in the nation in points against.  He is also a strong recruiter, which would be an enormous boost for an Irish defense that has been lacking in that category.  Despite Strong’s struggles at Texas he still managed to secure the No. 7 recruiting class in the nation.

After landing an impact defensive coordinator Kelly must thoroughly evaluate his staff for shortcomings.  Assistant coaches need to show production on the field as well as off.   If an assistant coach isn’t participating in a meaningful way in recruiting, that assistant needs to be let go.

What must be done if Brian Kelly is fired

If Brian Kelly is ultimately replaced there is only one easier-said-than-done rule: hire a replacement that is as close to a sure thing as possible.  Five straight failed coaches – yes, George O’Leary counts and so does Kelly if he is let go this off-season – has eroded Notre Dame’s status and credibility as a storied football program.  Notre Dame is 4-12 in its last 16 bowl appearances and hasn’t won a significant bowl game since the Cotton Bowl in 1994.  Notre Dame, more than any other program in the nation, cannot afford to swing and miss on its next coaching hire.  Whoever is the next coach at Notre Dame has to be the one who turns the program around for good.

The question is whether that option is indeed out there, and in all likelihood such background credentials would involve poaching a head coach from a well-established power five conference school.  And the chances of such an occurrence coming to pass, although not impossible, are slim.

Whatever route Jack Swarbrick decides to go he needs to get a handle on the current situation surrounding the program.  A report was quick to surface linking Brian Kelly to other coaching opportunities, and although that report was denied by Notre Dame administration, the denial will be as effective as a rock thrown at a tidal wave when it comes to recruiting.  If Swarbrick does decide to keep Kelly he needs to throw the full weight of his resources behind him and make it abundantly clear he is not going anywhere, because the current state of the program is recruiting poison.

For Notre Dame fans, the best thing to do is to grab some popcorn and watch the fireworks likely to come in the following weeks.