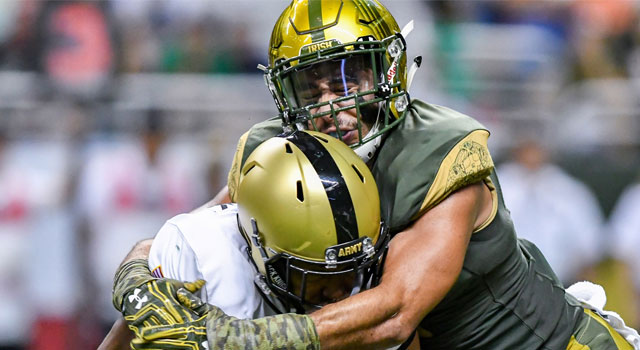 Notre Dame enters senior week on a rare high after their 44-6 drubbing of Army in the Lone Star state last Saturday. It goes without saying that this has been a very difficult and unfortunate season for the 2016 class, yet some of the strongest performances have come from those playing in their final home games for the Irish next weekend. We’ll get to those guys in a minute. As a whole, last weekend represented one of the few times we were treated to a complete performance on all sides of the ball for this Notre Dame team: the offense controlled the game holding the ball for 10 more minutes, the defense held the nations 2nd ranked running offense to 90 yards below their season average, and CJ Sanders opened the game with a 92 yard kickoff return for a touchdown (play him on offense!!). It is probably no coincidence that such a performance came against one of the weakest teams on the schedule in terms of overall talent, but when the team is 4-6 fans have to take what they can get.

Freshman Julian Love continues to impress, this time playing free safety, with a tackle for loss and an interception at the goal line. Greer Martini was again excellent against the option teams with 20 tackles combined against the two service academies. Kevin Stepherson got into the end zone one more time en route to 5 catches for 75 yards to bring his total to 21 receptions, 410 yards and four scores. The thing these three players have in common is the three star distinctions levied upon them out of high school by the various recruiting services, while also being some of the earliest commits in their classes. There is a lot to be said about Notre Dame’s ability (or lack thereof) to close strong in recruiting. But, they’ve shown an ability to identify under the radar talent early, which has been a strength during the Kelly tenure.

Don’t look now, but it’s another former three star recruit, who committed early, that turned into a captain for the Notre Dame football team. He is without question playing the best football of his career and his performance has been lost in this season of futility as is often the case. He currently leads the team in tackles for loss with 9.5 and on pace to finish with 11.5, which would be the most in the Brian Kelly era among linebackers since Manti Te’o’s 13.5 in 2011. He’s on pace to finish with 74 tackles and two sacks and is also currently 2nd on the team in passes broken up with 5. I wrote in the preseason about senior bump candidates and he was on the top of that list and he certainly lived up to that prediction this season.

Perhaps most impressively, he has continued his stellar play even as the season took a turn for the worse.  I don’t think it’s any secret that Irish defenders don’t like playing the service academies and this is especially the case when you enter those contests with a 3-5 record. Onwualu responded to those circumstances with 21 combined tackles including a career high 13 against Army. That’s what leadership looks like. He deserves to carry his head high as he takes the field for the final time in Notre Dame stadium versus the Hokies.

This guy is a warrior who has played way too many snaps the last two years to the point where it has been a disservice to him as a player and his overall output. He’s also played out of position due to the lack of serviceable players along the defensive line which has also limited his overall effectiveness. For those reasons, we never really got to see how good Rochell could be at Notre Dame, but he has given everything he had to the school and the program in a way that most players aren’t even asked to give and for that only positive things should be said about Rochell and his contributions. Just from a leadership standpoint he has lived up to his billing. Similar to Onwualu, it would have been easy for Rochell to ease off the throttle. He has not.

He would have been a slam dunk trending up a couple of weeks ago after his virtuoso performance against Miami, single-handedly destroying the hopes and dreams of the Miami Hurricane offense. Then the service academies showed up and the 6-5, 315 pound nose tackle made it very well known that he was not about the cut blocking schemes of those programs. There are differing accounts as to whether he was strategically held out or if Jones more or less asked out. Either way, Jones is likely just fine with only playing a combined 29 snaps in the last two contests. Is that fair to someone like Isaac Rochell, who has played a lions share of the reps his entire career, probably to the detriment of himself? No, it isn’t. But, it’s also understandable given Jones’ previous lower leg injury history.

That all being said, aside from the game against Miami, Jones has only flashed episodes of dominance and the 6 tackle for loss game two weeks ago aside, he’s notched only 2.5 tackles for loss in all other contests. I have a feeling that if this was written two weeks from now the story would be different; I have a hunch we’ll see some strong performances from him in the next couple of games. For now, it’s a wait and see.

There was some talk following the 2014 season that 2015 might be Cole Luke’s last season at Notre Dame. He was stellar as a sophomore with four interceptions, 48 tackles and 11 passes broken up. He also showed well against future first round pick Davante Parker out of Louisville and conventional wisdom was a similar junior year would propel him into the NFL draft. For whatever reason, we haven’t seen the level of play from Luke in the last two seasons, although he has trended back up in the last few games after a slow start to the season. Much like Jarron Jones, the next two weeks will tell the story for Luke’s season, as Virginia Tech and USC feature very strong passing games. Luke seems to have taken to playing out of the slot which will bode very well for him at the next level as he may not have the speed to play solely on the outside.

Injuries have really impacted what could have been a solid senior season for Hunter Jr. He is currently on pace for a 60 catch, 780 yard, 5 touchdown season had he played in all 12 games. In other words, Davaris Daniels in 2013. Such results would be completely acceptable given the performance of Equanimeous St. Brown, who projects for 60 catches 936 yards and 11 touchdowns (you guessed it, basically TJ Jones in 2013). However, knee and head injuries have kept him out of two contests and have limited him somewhat when he was playing. In some ways he has been disappointing–not all of which he can control–and in other ways he has lived up to what the Irish expected of him. Let’s not forget last season he finished with 28 catches for 363 yards in 13 games. He raised his game this year, without question.

Injuries and offensive philosophies derailed the careers from these two promising and talented players. You can imagine a world where Notre Dame was a ground and pound, play action passing team in 2016 with Zaire and Folston featured in the back field. Unfortunately, as we’ve seen throughout Kelly’s career, if he has the option to feature the pass over the run, then he will do just that. Folston has shown flashes this year, and of the two still has the best chance to rewrite his Notre Dame career in these final two games. He looked great last weekend with 84 yards and 13 carries which featured his patented inside running, something many fans hoped to see more of this season.

Zaire simply never had a chance this year after what we all saw against Texas. You could say he never had a chance once the offense evolved away from the style he was comfortable with after his ankle injury last season. An immensely confident player, he seemed to never recover from being demoted following week one against Texas. It’s too bad because he was clearly committed to the program, he could have transferred on a number of occasions, and frankly he deserved better. Wherever he ends up next season, I think everyone wishes him the best of luck.